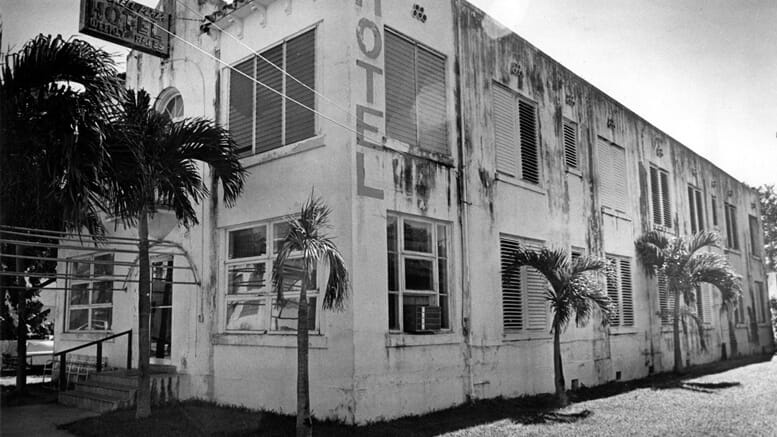 The cover photo is of the Mareldean Hotel and Rooming House on December 12, 1973. The photo was taken by Miami Herald staff photographer Marlin Levison and was used in an article on January 4, 1974 in a story about a rehabilitation center, located in this building, providing housing and services for recently released patients from mental health facilities in Dade County.

By the time this photo was taken, the building was forty-seven years old and looking every bit its age. While it was designed by one of the great Mediterranean Revival architects in South Florida, the old hotel was a shadow of its former self by 1973. This is the story of the six-decade history of the Mareldean Hotel which was formerly located at 44 S.W. Eleventh Street in the Brickell neighborhood. 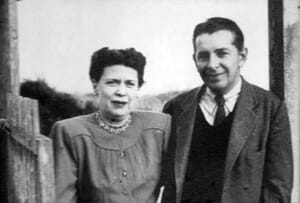 Figure 1: Architect Francis L. Abreu and his wife, May

The structure in the picture was constructed during the last year of the building boom of the 1920s, a time when housing in Miami was still in high demand. While there were signs that the boom was nearing its end during the summer of 1926, the Magic City was still experiencing a large influx of new visitors and transplants into the city. Housing availability was never able to keep pace with Miami’s growing population in the early to mid-1920s.

On June 22, 1926, the Miami Daily News announced that Thomas Dean was granted a permit to build a two-story, seventeen-room hotel at 44 S.W. Eleventh Street. The article stated that the hotel would cost $25,000 to construct and it would be completed by the fall. In addition, it was announced that Dean hired noted architect Francis L. Abreu to design the hotel.

On August 26, 1926, an article in the Miami Herald announced that the structural and outside work of the hotel was complete, and that the focus had shifted to finishing the internal work. The article indicated that Dean anticipated having the building ready for occupancy by October. At this time, Dean agreed to lease the building to Miami Beach hotelier, Zeline A. Pettelier, who named the hostelry the ‘Mareldean Hotel’. 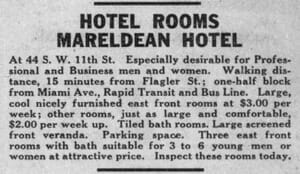 When the Mareldean Hotel advertised the opening of the hotel on October 17, 1926, it described an inn that was a short walk to Flagler Street and only a one-half block to rapid transit. There was a trolley that ran from downtown to Coral Gables along South Miami Avenue, which included a stop only a half-block from the hotel, that began operating around the time the hotel opened.

Like so many hotels that opened during the great building boom, the Mareldean operated more as a rooming house than a traditional hotel. Guests would stay for months at a time while the hotel offered a family atmosphere for its residents. On April 1, 1938, the tenants of the hotel arranged a surprise birthday party for the hotel’s proprietor, Mrs. Zeline Pettelier. The celebration featured a decorated lobby which included fresh cut flowers and an orchestra that entertained the guests with the popular music of the day. The night concluded with the cutting of a large birthday cake that was enjoyed by all who attended.

The hotel was operated by Mrs. Pettelier until the mid-1950s, when it was sold and renamed to the Elwood Hotel. Over the next twenty years it would be referred to as the Larson Guest House (1950s), aligning the name with its business model, and the Brickell Plaza Hotel (1960s). During the turbulent decade of the 1960s, both the neighborhood and the rooming house changed dramatically, forcing the Brickell Plaza Hotel to operate as a low-rent flop house.

When Walter E. Cox of Dodd Realty purchased the hotel for $75,000 in November of 1969, he leased the building to Elota McAllister Gray, who ran a make-shift half-way house for those who couldn’t qualify for housing anywhere else. She took in patients who were discharged from local mental hospitals, and others who had limited means. She received supplemental income from Dade County for operating the hotel as a rehabilitation center.

Given that some of the guests living at the rehabilitation center may have been prematurely released from a mental health institution, there were some infamous confrontations with law enforcement. As an example, in November of 1975, one of the boarders walked from the hotel to a pay phone located at 919 South Miami Avenue (roughly in front of the Starbucks in Mary Brickell Village by today’s address) and made a phone call to the Secret Service. He offered information about someone who was planning to fly to Washington D.C. to assassinate President Ford. As it turned out, the informant was the one who was planning on killing the president. The call was traced to the phone booth and the caller was arrested. Once the investigation led back to the rehabilitation center, the Secret Service found plane reservations to Washington D.C. and a gun in the boarder’s room. 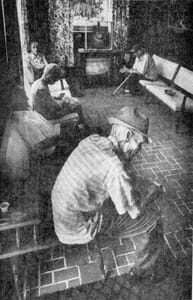 By the late 1970s, the rehabilitation center became an Adult Congregated Living Facility (ACLF). ACLF’s are designed to provide care for the elderly and handicapped persons who need some care, but not the same level of service needed in nursing homes. It didn’t operate in this manner for very long, as the condition of the building got worse and the ACLF designation was revoked by the mid-1980s.

In 1985, the building was sold for $250,000 to real estate trust, presumably for future development. Although there are no references as to what happened to the former Mareldean Hotel following the sale, there were no references in newspapers to the address or the name of the hotel following the sale of the building in 1985. The former site of this structure is now part of the Millecento Condominiums located at 1100 South Miami Avenue.