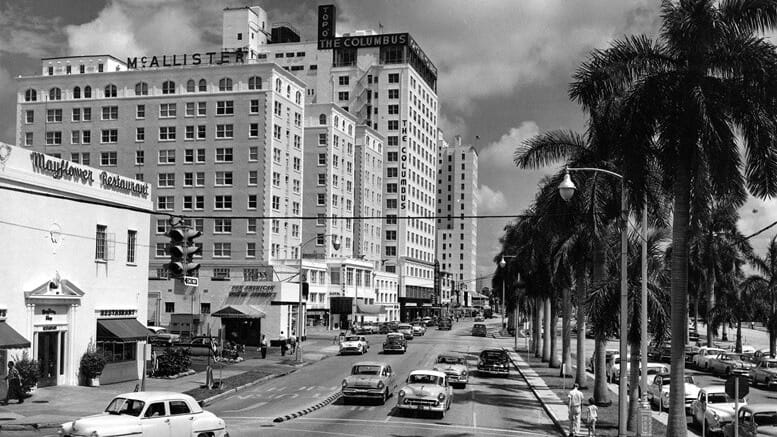 The cover photo reveals a bustling Biscayne Boulevard during the post-World War II era of downtown Miami. The late 1940s and early 1950s represented a time of tremendous growth for South Florida, while the skyline along Biscayne boulevard was lined with buildings of a foregone era, constructed and opened during the great building boom of the 1920s.

Examining the picture more thoroughly, one can gaze from Flagler Street northward along the boulevard, to spot the Pan American ticket office, established on the southern corner of Flagler and the boulevard in 1928, as well as the McAllister Hotel, once the tallest building in Miami when it opened in 1920. In addition, one can see the Columbus and Miami Colonial hotels, both constructed and opened during the peak of the building boom, more than twenty years prior to when the cover photograph was taken.

The building closest to the photographer, on the left, was the home of the Mayflower Restaurant, which was located at 80 Biscayne Boulevard, on the northwest corner of SE First street and the boulevard. This article will tell the story of this restaurant which operated for nearly a quarter of a century along, arguably, one of the city’s most important thoroughfares in downtown Miami.

Started with a Donut Machine 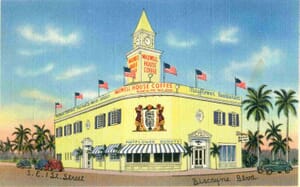 In 1932, Donut Corporation of America invented a doughnut making machine and opened a shop on Broadway in New York City to prove that their technological advancement would revolutionize how the round pastry was prepared. The company offered free samples to anyone who stopped into the cafe. As the donuts became more popular, customers suggested that they offer coffee to pair with the pastry, which led to the restaurant to offer Maxwell House coffee on their menu.

Through the years, the restaurant extended its menu to offer sandwiches, pies, waffles, cakes and other bakery items. The establishment changed its name to the Mayflower Donut Corporation and began expanding to additional geographic locations from New York to California. When the company decided to enter the Florida market by opening a location in Miami, they chose a busy corner at the southern end of Biscayne Boulevard. 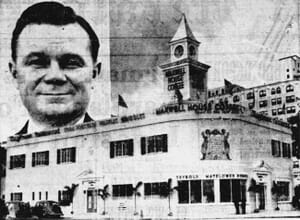 After selecting the corner of SE First Street and Biscayne Boulevard as the location of their newest restaurant, the owners of the Mayflower Restaurant constructed a modern building with a drive-through window and an adjoining parking lot. When plans were drawn to design the structure, the corporate office intended for the Miami location to be the largest eating establishment in their chain of restaurants.

The building was described by the Miami Herald in 1941 as follows:

“The new enterprise, completed at a cost of $150,000, is designed architecturally along modernized American style lines. The interior decoration scheme utilizes modern American designed wallpaper and unpainted pine woodwork to carry out the early American theme. The entire shop is lighted indirectly.”

The two-story, curvature building included a dining room and kitchen on the first floor, offices and meeting rooms on the second, and an ornamental tower with a triangular secondary gabled structure featuring a clock. The second level was decorated with the name of the restaurant, its coffee sponsor (Maxwell House), and the types of baked goods and food provided in their eatery. The marquee on the ground level featured their local bakery partner and the name of the corporate entity.

By January of 1941, the construction of the restaurant was complete, and the Donut Corporation of America was preparing to introduce South Florida to the Mayflower. The company wanted to make a big first impression at its grand opening on January 22, 1941, so they hired Desi Arnez and Lucille Ball to cut the ribbon during opening ceremonies that afternoon. In the evening, they inaugurated Miami’s Royal Palm Beauties as honorary inductees into the National Dunking Association, which was a membership-based organization started by the Donut Corporation of America in the 1930s to make a sport of dunking donuts in coffee, tea, cocoa or milk. 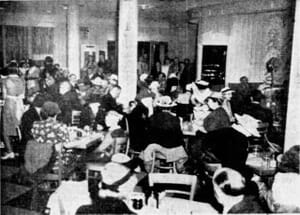 The Mayflower Restaurant, located at 80 South Biscayne Boulevard, was an instant hit from its opening in 1941 through the 1950s. It was known as a place where a family, or group, can enjoy an affordable meal. While it was known for its donuts and baked goods, the eatery also offered complete meals including fried perch with French fries, or a full spaghetti dinner for as little as one dollar per person.

The company advertised itself as an establishment that offers a comfortable atmosphere and courteous, attentive service which “will make you feel like coming back again and again.” The Biscayne Boulevard location was conveniently located for those living within walking distance and provided plenty of parking for those who lived outside of downtown. The drive-through window provided additional opportunity to pick-up dinner for those too busy to dine in the restaurant. 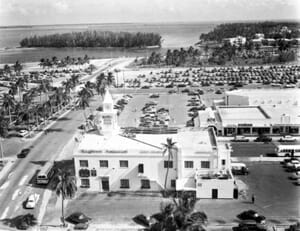 Figure 4: Aerial of Mayflower Restaurant in 1952

Within the first year of opening, the Mayflower Restaurant became a popular venue to host luncheons and meetings. One of the first organizations to schedule a weekly luncheon was the Dade Business and Professional Women’s club. In July of 1941, the featured speaker at their luncheon was Sheila Murrell, largely responsible for the passage of the Married Women’s Emancipation Act of Florida, which allowed married women to sign contracts and own property in their own name.  Prior to the passage of this act, married women were prohibited from owning property in their name or signing contracts without their husband’s co-signature in the state of Florida. The bill to emancipate married women passed the Florida State Bar Association convention in March of 1941.

Sheila, and her husband John, constructed and lived at 1500 Brickell Avenue, a residence nicknamed Petit Duoy, for more than fifty years. The couple’s former residence still stands today on the corner of Brickell Avenue and SE Fifteenth Road in the Brickell neighborhood, and will soon open as the location of a new restaurant called “Chateau Miami”.

According to an article in the Miami Herald, the Mayflower became a favorite spot of displaced Cubans who met in the early 1960s to plot the overthrow of Fidel Castro. While the dream of a Castro-free Cuba never materialized, a 39-story commercial tower, which was designed by exiled Cuban architects, was constructed on the former location of the restaurant in 1972.

Also, in 1960, the second floor of the restaurant, which was used primarily as banquet and meeting space, was made the Junior Achievement Center. The center was used frequently by Junior Achievement for meetings and events to support the education and ambition of young Miami residents. 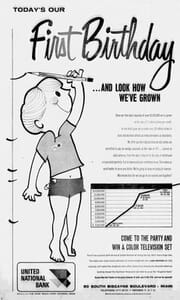 Despite the popularity of the restaurant, it closed in 1964 when the property in which it resided was leased by a new bank startup. United National Bank was found by a group of businessmen, headed by Frank Smathers Jr., brother of Senator George Smathers. The bank signed a lease to utilize the property as both its first branch location and corporate office. The plan was to erect a commercial tower to be the permanent home of the bank on the acreage occupied by the restaurant.

The financial institution opened on October 28, 1964, in a remodeled version of the old restaurant building. The bank’s plan was to operate from the small, but serviceable, retrofit restaurant building until they broke ground for what was expected to be a 30-story office building named the United National Bank building.

However, the lease was purchased in December of 1970 by Caribe Investments, headed by Jose and Maurice Ferre, and the plans for the building changed. Due to this transaction, the United National Bank decided to move south, across the river, and establish itself at a different location.

The Ferre’s modified the blueprint and decided to add ten stories to the original design. In addition to the change in height, the building took on a new name, One Biscayne Tower. Jose Ferre, who built the New World Tower at 100 Biscayne Boulevard in 1965 to eclipse the Dade County Courthouse as the tallest building in Miami, was no stranger to ambitious projects. One Biscayne Tower eclipsed 100 Biscayne as the tallest building in Miami when it opened in January of 1973. 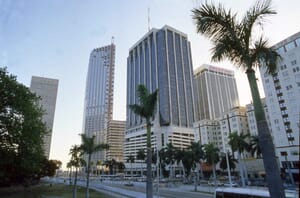 By the time Caribe Investments were ready to proceed with the construction of One Biscayne Tower in 1971, they still needed to account for the Mayflower Restaurant building, at that point operating as a bank, that resided on the parcel of land. On February 9, 1971, the iconic restaurant building was razed leaving thirty years of memories along Miami’s iconic boulevard.

Once One Biscayne Tower was completed and finally opened in 1973, it would have been forgivable for Miami residents to have forgotten what was once in its place. The memory of the restaurant hardly compared to the sight of a new, 39-story tower that helped change the Biscayne Boulevard skyline from hotel row to commercial office and residential skyscrapers.

However, as you travel down the boulevard and gaze upon One Biscayne Tower, some Miami residents may still utter the famous motto of the restaurant that once stood on that corner:

“Whatever be your goal, keep your eye upon the donut, and not upon the hole”

The Mayflower Restaurant may be long gone, but that memorable maxim still resonates today.