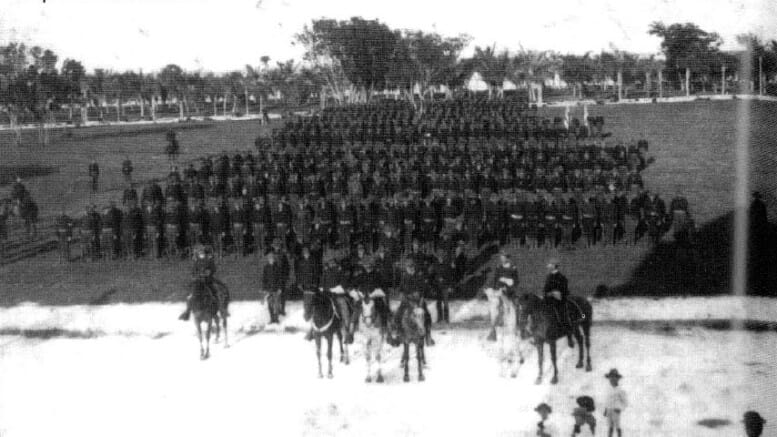 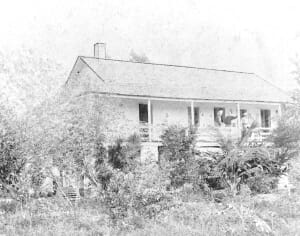 As noted in the previous installment of this study, conditions in Camp Miami in the summer of 1898 worsened for 7,000 soldiers under the onslaught of heavy rainstorms, high temperatures, and humidity.  One solider complained: “Here at Miami we have heat, mosquitoes and sandflies that beat anything we have ever met.  We even hang our hats on the mosquitoes at night.” Another delivered a memorable, mordant lament for Camp Miami: “If I owned both Miami and hell,” he complained, “I’d rent out Miami and live in hell.” Indeed, “Camp Hell” became the soldiers’ sobriquet for their facility.

Miamians grew disillusioned with the antics of frustrated soldiers in Camp Miami. Theft on the part of the men constituted one of the problems.  Riflemen used coconuts for target practice.  Others upset townspeople by swimming naked in Biscayne Bay, which, arguably, could be described, at that time, as “the world’s largest bathtub!” A despondent soldier killed himself in the beautiful grounds surrounding the home of Julia Tuttle. Terrorism against residents of nearby Colored Town, the city’s segregated African-American community, represented a far more serious problem since it included violence against citizens, prompting many to flee the quarter for nearby Coconut Grove for safety.  As historian Arva Parks has noted, the many troubling incidents involving soldiers prompted some residents of the Magic City to label this experience: “The Battle of Miami.” 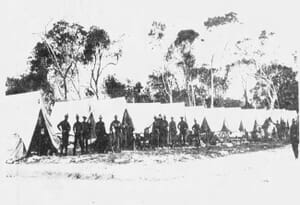 In fairness, there was a positive side to the relationship between the soldiery and residents.  As noted, the spending on the part of soldiers was a boon to Miami’s retail establishment.  For their part, Miamians supported their guests by providing sewing kits and other notions.  Churches encouraged soldiers to attend services.  The priests of the Church of the Holy Name (today’s Gesu Catholic Church), located just south of the encampment, celebrated Mass for soldiers and administered the sacraments to them at the campsite.  Soldiers also “packed” the congregation’s modest, wood-frame church for its three Sunday Masses, and they organized a choir with an organist and a double quartet, which “rendered some very fine music.”

The Miami Metropolis praised the soldiery whom it characterized as “a first-class set of men.” With their attention riveted on the nearby war, many Miamians felt secure in the knowledge that so many soldiers resided within their midst.  Additional reassurance came from the spectacle of troops drilling, sometimes for lengthy periods under a broiling sun, in Royal Palm Park, and marching in long columns through the city’s downtown thoroughfares.  Still, some Miamians remained fearful of Spanish intentions.  Olive Chapman Lauther recalled that “it was nothing unusual to see several persons along the water front with their heads just about touching the waters of Biscayne Bay listening to the sounds of battle.”  The closest Miamians got to the conflict, however, was a view Spanish prisoners of war who were delivered to the Royal Palm docks from Cuba in route to prison in Atlanta. 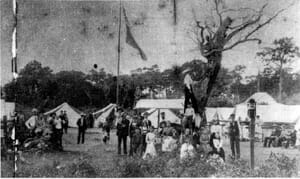 Camp Miami was short-lived, lasting but six weeks.  At the beginning of August, with fighting already over in Cuba, the soldiers received orders to break camp.  By August 12, the last unit had left Camp Miami, although a few staff officers and a small hospital detachment remained to assist those men too ill to move.  Even the final day was marked by tragedy when a lightning bolt struck a soft drink stand where many soldiers had gathered, killing two of them.

Predictably, the Miami Metropolis emphasized the benefits of Camp Miami.  “It caused 10 acres of scrub land within the city limits to be cleared,” the journal noted.  “And it contributed directly to the construction of new railroad trackage, additional paved streets, an artesian well, two large warehouses and several new stores.”  Additionally, the Metropolis observed, Camp Miami provided employment for everybody for nearly six weeks, made business brisk and help advertise Miami from Maine to California.

The Army provided a soberer evaluation of Camp Hell.  General William M. Gordon, commander of the Second Brigade, observed, in a letter to Joseph A. McDonald, a leading Miami citizen, “That we have not realized the benefits we hoped for has not been your fault, but the result of factors beyond our control.  The fact is that the number of troops were too great for the resources of a place where almost everything they need had to be created.” 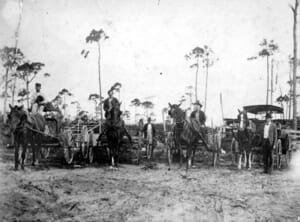 Miami has hosted a series of military installations since the era of the Seminole Wars in the mid-1800s. While Camp Miami represented a mixed blessing for the fortunes of the young community, later encampments, most notably those of World War I and II, would bring benefits to Miami as hundreds of thousands of men and women in uniform gained their first glimpse of this slice of the subtropics.

Not only did military spending during those conflicts enhance the economy of Greater Miami, but, additionally, thousands of soldiers acquired “sand in their shoes” during their stay, and returned to Miami after wartime to reside permanently in the Magic City.  Moreover, the political upheaval in Cuba that had helped trigger the Spanish-American War, would occur again and again on the island, as well as in other countries to the south.  The refugees and immigrants from this turmoil would reshape and redefine Miami in the second half of the twentieth century, and pave the way for its transformation into an international city.