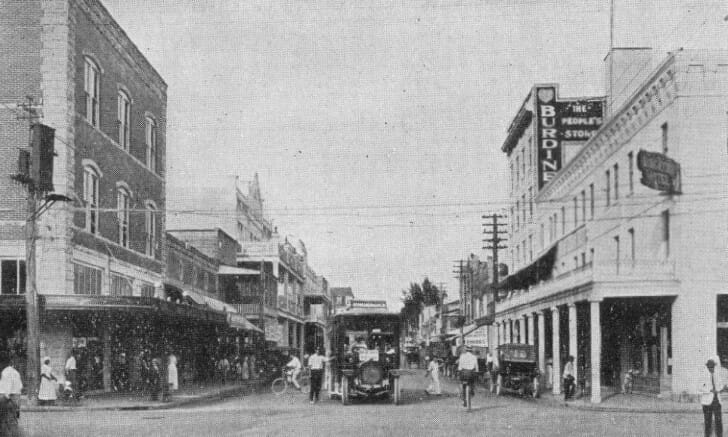 The photograph features a view at the corner of Avenue D and Twelfth Street in 1913. The photographer stood in the middle of the western side of the intersection facing east.

If the street names don’t sound familiar, it is because the naming convention for Miami streets changed in 1921 as part of the Chaille Plan. Today we would know this corner as Miami Avenue and Flagler Street. 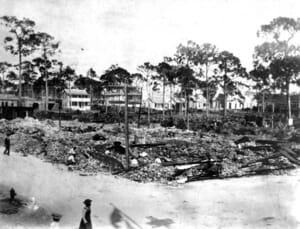 The building closest to the corner on the north side (left) of the street, was Budges Hardware. This was the second Budge’s hardware that was built at this location following a fire that burned the prior building to the ground in 1900.

Just east of the Miami Grocery was the New Everglades Hotel. Continuing east was Seybold’s Bakery and Ice Cream Parlor. John Seybold would later replace the 1913 building with the Seybold Arcade on the same site. Seybold was also the builder of the Spring Garden sub-division along the Miami River. 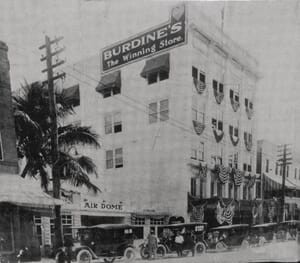 The building closest to the corner on the south side (right), of the street was primarily occupied by the Hotel Biscayne. However, it did have other tenants. The Biscayne Drug Company and Sewell-Harley Realty were also located in the building.

Moving east along the south side (right) of the street, the next structure was considered the tallest building south of Jacksonville when it was built in 1912. The Burdine Building was five stories in height and consisted of 151,000 square feet. Also in 1912, Roddy incorporated the family business and changed the name to W.M. Burdine’s Sons from Burdines and Sons.

The Burdine Building provided too much square footage for W.M. Burdine’s Sons retail operation, so Roddy Burdine rented some of the higher floors to other tenants. A number of professional firms rented office space from Roddy. One notable firm that rented in the Burdine Building in 1913 was Shutts, Smith & Bowen law firm. They rented offices on the fifth floor.

H.T. Whaler also bought Dr. James Jackson’s home and office in 1916 while both buildings were being moved from downtown Miami by barge. Dr. Jackson wanted to preserve his home and office and was in the process of moving them to Miami Beach. However, Whaler ended up buying both buildings and redirected the move to today’s SE Twelfth Terrace in the Brickell neighborhood. The Jackson office still remains at 190 SE Twelfth Terrace. It serves as the office of Dade Heritage Trust.