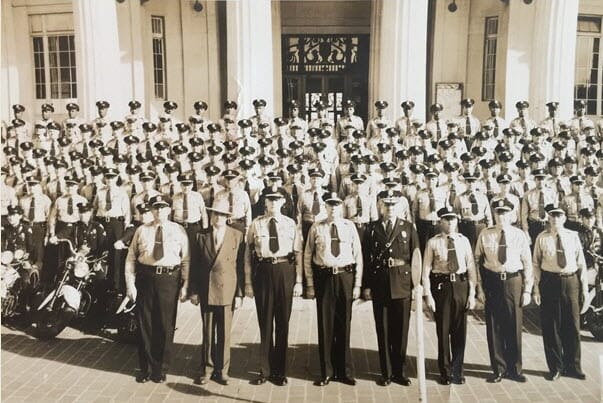 It has been said that a picture is worth a thousand words. Sometimes that thousand words knit together to tell the story of a family. Beth Fox shared a panoramic photo of the 1950 police department posed in front of the historic Dade County Courthouse. The photo represented the start of a career for her father, Ken Fox.

The photo captures the pageantry and pride of those who served in the city police department in mid-century Miami. The photo also tells the story of a family that established roots in Miami following service during World War II.

Henry Lee got involved with building homes in the Charles and Elizabeth Street areas. The homes were very distinctive in that they featured very bright colors for the time. Some of the homes built by Henry Lee on Charles Street remained many years later. There may still be one or two that remain standing today.

Beth’s mother, Elizabeth, and her siblings grew up in Coconut Grove. Beth still has her aunt’s graduation ring from Ponce De Leon High when it was a high school. The school has been a middle school for many years. 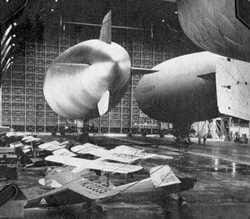 Richmond Naval Air Base in South Dade during WWII

Although Ken Fox was born in Springfield, Illinois in 1925, when it was time to serve his country during World War II, he was deployed to the Richmond Naval Air Base in South Dade County. Richmond Naval Air base was the home of a fleet of blimps responsible for finding German Submarines off the South East coast. Ken’s job was a blimp mechanic and worked within one of the three hangars used to maintain the anti-submarine blimps.

Beth’s mom, Elizabeth Harper, was living with her two older sisters just on the outskirts of downtown Miami at 610 SW Thirteenth Avenue in what is now part Little Havana. The three women had civilian jobs at Richmond Naval Air base and would take the bus from Miami to South Dade County for work.

It was at the Naval Air Base that Ken and Elizabeth met. One of Elizabeth’s sisters met and married a British RAF pilot in Miami. The pilot’s name was Leeland Evans and, unfortunately, he was shot down and killed two years after their marriage.

After Ken Fox’s assignment in Miami was over in 1945, he was sent to Connecticut. He sent for Elizabeth and the two married shortly after her arrival. Like so many others who served in Miami during World War II, the Fox’s returned to Miami shortly after getting married.

The newlyweds moved back to Coconut Grove and settled near the area we now know as Merrie Christmas Park. Ken worked a couple of jobs including time as a bus driver. However, he discovered his true calling in 1948.

Ken Fox joined the Miami Police Department in 1948. He appears as a young officer in the 1950 panoramic photo that he saved and pass along to his daughter. Ken served in a number of different roles within the Miami police department during his 29 year career on the force.

One of his roles was lieutenant at the Overtown Precinct in the early 1960s. His job was to prepare the annual budget for the station. He was thoroughly disappointed with the conditions the black officers had to endure. The locks on the jails were broken, the roof leaked, the water fountains didn’t work, the toilets didn’t flush and there were pot holes in the parking lot.

Ken Fox believed that all officers that carried the badge should be treated the same and given the same resources to do the job. Quietly, he began to document all of the problems with the station. He had a photographer, from the identification unit, take pictures all of the deficiencies. Fox gathered estimates to fix the problems and submitted the photos, along with a budget, to City Hall to provide an idea of the condition of the station and what needed to be done to address the issues. 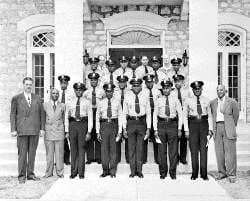 Black Miami Officers in front of Halissee Hall in 1952

Rather than fixing all of the deficiencies, the city decided to close the station in July of 1963. The Director of Public Safety, Colonel D.D. Pomerleau, explained the closing of the station in a Miami Herald article as necessary to “increase efficiency and eliminate duplication of physical properties and assignments”. The closing of the Overtown precinct led to integration of the Miami Police.

However, it was most likely Ken Fox’s research that acted as a catalyst to force integration of the police precincts. Although officers began working together in the same building, work assignments were still divided by racial lines. The same Miami Herald article made it clear that black officers will still patrol the black areas of town.

Fortunately, almost 40 years after the closing of the Overtown precinct and courthouse, the building was still standing. On September 17th, 2002, the preservation board approved historic designation of the former precinct. The building is now the home of the Black Police Precinct and Courthouse Museum.

Much like her father, Beth Fox decided police work was her calling as well. Beth graduated from the police academy in 1994 and served on the Miami-Dade Police Department until she retired in 2005.

Following retirement, like so many other long time Miamians, Beth decided that the changes in Miami was no longer for her. She chose to move up Central Florida in 2005. Recently, as part of another move, she rediscovered the photo her father left her so many years before.

Assuming the museum decides to accept the photograph, the Miami Police Department in 1950 photo will be donated to the History Miami museum research center in the near future. Hopefully, the photo will provide the opportunity for another Miamian to identify a family member that served along with Ken Fox and the others standing so proudly in front of the Dade County Courthouse in 1950.

6 Comments on "Miami Police Department in 1950"