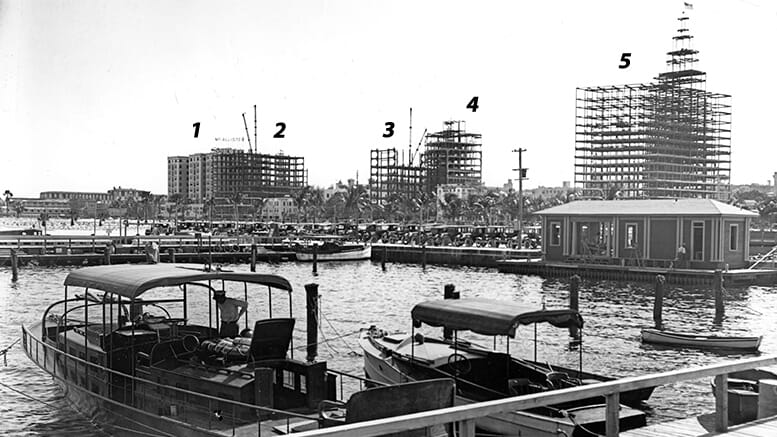 The cover photo was taken from a pier on Biscayne Bay at the end of NE Fourth Street and North Bayshore Drive looking southwest during the peak of the building boom in 1925. Within a year of this photograph, North Bayshore Drive was expanded and renamed to Biscayne Boulevard. In the foreground, one can see the development of newly created Bayfront Park, which was constructed from bay bottom and fill beginning in 1924. The dock from which this photograph was taken was just outside of the northern edge of Bayfront Park.

This view from NE Fourth Street and the bay provides a good perspective on the amount of construction during a period of unfettered growth. Only two of the buildings in this photograph are part of Miami’s contemporary Biscayne Boulevard skyline. Although dwarfed by today’s much taller skyscrapers and operating under different names, the Watson and Exchange buildings are the two remaining structures seen in this photograph.

Below is a brief description of the buildings under construction along the boulevard, as enumerated in the picture, during the great building boom of a century ago. 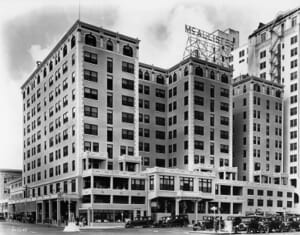 The McAllister Hotel began construction and opened five years prior to the date of this photograph. The project was initiated by Emma McAllister, who also constructed the Ponce De Leon Hotel on Flagler Street in 1924, but experienced a series of unfortunate circumstances during its development. A hurricane, construction accident, as well as labor and building material shortages delayed the project considerably. It was expected to be completed in 1918, but the project dragged out two years longer than planned.

Emma ran out of money prior to the completion of the development which led to the hotel being finished by a different group who purchased the mostly completed hostelry for $375,000 in July of 1919. Despite the change of ownership, the hotel kept the original name of the establishment.

The McAllister Hotel officially opened on December 31, 1919, to an elaborate New Year’s Eve dinner and ball. This building, along with the Columbus Hotel, stood on Biscayne Boulevard until 1988 when both were razed to make room for a much larger and ambitious project. Actually, demolition of the two buildings began in 1988 but the Columbus was not completely removed until 1990. However, following the clearing of the land, the lots stood largely vacant until the 50 Biscayne building was constructed in 2007 on the footprint of the former McAllister and Columbus hotels.

Looking to the left of the McAllister Hotel in this photograph one can see the Royal Palm Hotel. Henry Flagler’s signature hotel only stood for five more years as it was slowly razed beginning in 1928 and mostly gone by 1930. 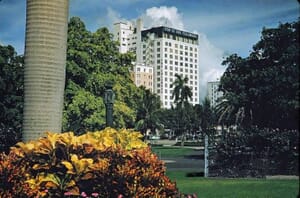 In September of 1924, the Miami Herald reported that a 15-story apartment hotel building will be erected by E.D. Sullivan on the corner of NE First Street and North Bayshore Drive (renamed Biscayne Boulevard in 1926). Sullivan was from Columbus, Ohio, providing a hint on where the hotel got its name.

Sullivan was known as one of the most prominent hotel owners in Ohio when he decided to expand his operations to Miami. He began his career as a bellboy at the Deshler Hotel in Columbus and worked his way to eventually buying and selling the establishment. After selecting the site for the Columbus, he hired architect E.A. Nolan to design the building. By the time the architectural rendering was completed, the hotel grew by two stories topping off at 17 floors instead of 15, as was originally reported by the Herald.

Construction of the building was completed in early 1926 allowing the grand opening to occur on February 18th. The opening featured a dinner and dance on the roof garden of the seventeenth floor with music provided by Earl Burtnett’s orchestra from the Los Angeles Biltmore. Incidentally, the opening of the Columbus Hotel coincided with the opening of the Olympia Theater on Flagler Street. Dinner at the Columbus was extended to 11pm to accommodate anyone who planned on attending both events.

The hotel was probably best remembered for its Top O’ Columbus restaurant on the seventeenth floor of the building. The establishment provided some of the best views of Miami and Biscayne Bay during its sixty-two years along the boulevard. Miami residents fondly remember celebrating milestone events in their lives at the hotel and restaurant. 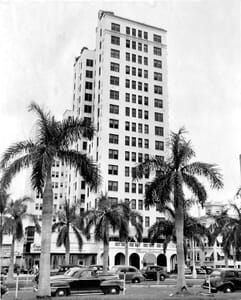 The Watson Hotel was conceived and financed by Callie Watson of Buffalo, New York, in 1924. Watson hired George E.T. Wells and his partner, G. Lloyd Preacher, of Atlanta, Georgia to design their building. Like the situation with the McAllister Hotel, labor and material shortages led to delays in the completion and opening of the Watson Hotel.

The hostelry held its formal opening on July 1, 1926, at a time when Biscayne Boulevard was being expanded and torn up during construction. The work provided an obstacle for guests and patrons of the ground-level retail stores to get to the building. About the time the boulevard expansion project was close to completion, the city was devastated by a major hurricane in September of 1926. These factors forced the hotel into bankruptcy by February of 1927.

After short periods of ownership by a couple of different partnerships, an investment group from Pittsburgh, Pennsylvania, came into Miami and purchased several financially distressed buildings, including the Watson Hotel. They rebranded and renamed the building the Miami Colonial Hotel in 1930. Today, the building still stands and operates as the YVE Hotel. 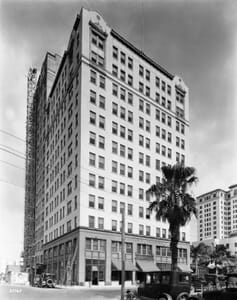 While the other buildings enumerated in the photograph were built to provide additional room capacity for tourists and winter residents, the Exchange Building was constructed to address the shortage of commercial office space in the city. The Palmer-Larrimore company financed the 12-story office building on the corner of NE Third Avenue and NE Second Street, directly behind the Watson Hotel.

Like the edifice constructed in front of the Exchange (Watson Hotel), the structure was also designed by E.T. Wells and G. Lloyd Preacher, and was built by the Realty Construction Company. The office complex opened in December of 1925 with the Munson-Line shipping company as the signature tenant.

However, like so many buildings financed with debt during the construction boom, the owners of the Exchange Building filed for bankruptcy in the late 1920s. It was purchased out of foreclosure and converted to the Exchange Hotel in 1929, which lasted until the entry into World War II when hotel was occupied by the U.S. Navy to house enlisted men during the war. A few years after the hotel was returned to the private sector, it was converted into the Chamber of Commerce building in 1948, returning to its original function as commercial office space.

The building still stands today, but looks much different than it did when it was built. A change in façade to modernize the appearance of the building was added in the latter half of the twentieth century and the building now operates as the Bayside Office Center. 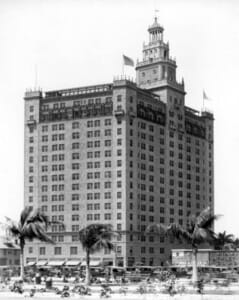 The Everglades Hotel was originally built as rental apartments when it opened on January 1, 1926, but was converted to a hotel shortly after opening. Although its design possessed similar architectural features as other Schultze and Weaver blueprints in Miami, namely the cupola atop the rooftop tower, it was not conceived by the firm that was responsible for the Miami News (Freedom) Tower and Biltmore Hotel in Coral Gables. The building was initiated, financed, and designed by the Fred F. French Security company.

When it opened in 1926, the structure provided fully furnished one-to-four-room apartments, with some designated as hotel rooms. Eventually, the Everglades became a full-time hotel until the advent of World War II when it was turned over to the Navy for officer housing. After the hotel was returned to the private sector, ownership changed multiple times until it fell into receivership in the early 1960s.

It was the Teamster’s Union, headed by Jimmy Hoffa, that purchased the building out of bankruptcy. The union owned the hotel from the early 1960s until 1978. The building remained an important part of Miami’s skyline until January of 2005 when it was razed to make room for a condominium complex called ‘Everglades on the Bay’. The facility changed its name to Vizcayne in February of 2011.