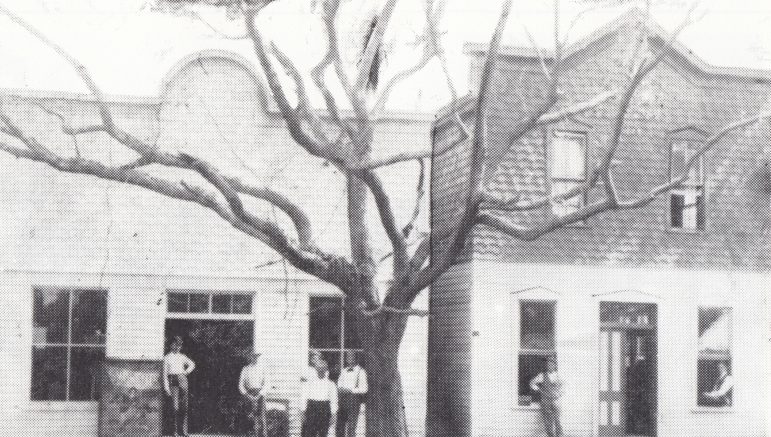 As joyous as the holiday season of 1896 was for the South Florida community, there was foreboding on the part of its lone newspaper, the Miami Metropolis, over the damage a fire could bring to its wood frame buildings, and its good fortune. As the journal observed, “Miami has been very fortunate so far, not having a fire alarm (meaning a bell located in a common area that would sound an alarm in the event of a fire).  We tremble when we contemplate our exposed condition and how inadequate we would be to handle a fire if one should be started.”

Cataclysmic fires in communities where the building stock was primarily wood, and where a rudimentary fire department was lacking, were commonplace in that era.  Two weeks before Miami’s conflagration, a fire in Titusville destroyed nearly every one of its buildings.  On two occasions in 1896, West Palm Beach was victimized by fires that laid waste to much of its wood building stock. Miami’s fire began in the early hours of the morning following Christmas in E.L. Brady’s store, a purveyor of groceries, grain, hay, and garden seed, located on the northwest corner of Avenue D and 14th Street, today’s South Miami Avenue and Second Street.  The Metropolis believed that the fire resulted from the prodigal detonation of fireworks on Christmas night by joyous Miamians in blissful ignorance of a municipal ordinance prohibiting that activity within the city limits. Even worse, many revelers threw firework under buildings in the business district and elsewhere.

J.L. Phinazee, a restaurateur, was returning from a meat market at 4:00 a.m., presumably after purchasing cuts for the day ahead, when he saw flames outside of Brady’s store.  Phinazee sounded an alarm as the flames spread quickly from Brady’s store, engulfing the nearby Bank of Bay Biscayne building before spreading to Capt. E.H. Chase’s poolroom building and beyond.  One and one-half hours after the alarm was sounded, twenty-eight buildings lay in ruin. A stiff wind blowing in from the east spread the flames “with a fury scarcely ever witnessed in a fire.” The entire block on both sides of today’s South Miami Avenue between First and Second Streets had been destroyed by fire.  In all, three blocks of buildings in the district were gone. Several other structures were damaged, though the building housing the Metropolis, situated one block south of Brady’s store, was spared.

Julius Franks, a clothier operating in partnership with Isidor Cohen, was the lone fatality, losing his life while he and Cohen were removing clothing from a building on First Street.   The fatality was the result of an explosion in the bottling works plant of Alois Zapf, in the rear of Frank’s building.  The deadly missile struck Frank in the abdomen, causing him to lose consciousness immediately.  He died soon after.

The twenty-eight buildings destroyed by the flames were, in the estimation of the Metropolis, comprised “all of wood and nearly all cheaply built…All were put up hurriedly within thirty days after the railroad to Miami was completed in April.  There was not a foot of vacant space throughout the territory burned.  The buildings all went like kindling wood. A few scraps of iron, a few brick foundation pillars, two heaps of mortar from the only two plastered buildings in the burned territory, a few tin cans and piles of broken crockery now comprise all that remains of the twenty-eight business houses.”

Owing to the absence of a fire department, the “flames had full sweep” of a large portion of the business district.  The lone element for combating the flames was the water tower of the Hotel Miami.  A small group of persons led by Julia Tuttle and known as the “bucket brigade,” worked feverishly to stem the fire.

As Henry Chase, grandson of Captain Chase, and much later a renowned Miami fire chief, observed that the fire fighters had “nothing to do but throw stones at that fire.  We had no equipment.”   The Metropolis noted that the energetic Tuttle worked “like a trojan for two hours carrying and pumping water at the fire.”  In the aftermath of the blaze a disconsolate Tuttle sat down on top of an upturned bucket, complaining of a headache.

Few of the buildings were insured. The Metropolis believed that the insurance coverage on the twenty-eight structures and their stock amounted to only $7,500.  The journal placed the total loss of buildings and inventory at nearly $29,000.

Despite this devastating setback, several positive developments followed for the neophyte city.  Many merchants who had lost their businesses because of the calamity reopened within days of the conflagration in temporary quarters (including the widow of Julius Frank). Others began to build new quarters, “before the smoke of the ruins had ceased.” Many were building in red brick following a city council ordinance, passed in the aftermath of the fire, extending the fire limits to bring six blocks, including the heart of the business district, within the fire limits.  This ordinance banned the construction of any additional wood frame buildings in that zone.

In the meantime, the business district was moving north in the direction of 12th Street, today’s Flagler Street, which, by the early 1900s, became the city’s main thoroughfare. Later, a volunteer fire department and, ultimately, a permanent fire department appeared.

The Metropolis emphasized Miami’s resiliency when it observed that the infant city rose “Phoenix-like from her bed of ashes” in the fire’s aftermath. This tragedy would serve the city well when it faced future adversity.

2 Comments on "Miami’s Christmastime Fire of 1896"