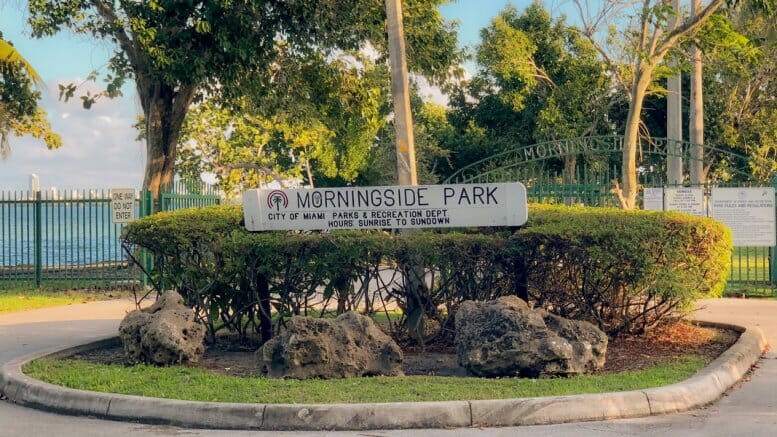 With the demise of the great real estate Boom of the mid-1920s, and the destructiveness of a hurricane following closely on its heels in 1926, Miami fell into an economic depression three years before the rest of the nation. While some building continued in Bay Shore during the early years of the Great Depression, the preponderance of new construction took place between 1936 and 1941 (as it did on South Beach, leading to the creation of the world’s largest neighborhood of Art Deco/ Streamline Moderne buildings). Seventy-three homes, usually smaller than those built in the 1920s, and bearing a variety of postwar styles, arose in the wooded, virgin land south of the original Bay Shore neighborhood in the newly created subdivision of Bayshore Plaza.

Just two homes were built during World War II, but the postwar boom led to a vast expansion of Morningside, with the preponderance of building stretching from N.E. 53rd Street south to N.E. 50th Terrace. This section of the neighborhood is adjacent to the northern limits of Bay Point, an affluent community created at the outset of the 1940s, on a nature preserve formerly owned by Charles Deering. 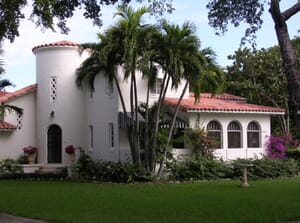 The neighborhood stretches in an east-west direction from Biscayne Boulevard to Morningside Park, or N.E. 7th Avenue, and, ultimately, Biscayne Bay.  One of Miami’s finest green spaces, Morningside Park, with its large swimming pool, picnic area, athletic field and courts, is also a product of the postwar era, opening in 1953. From that time forward, the name “Morningside” became the standard name for the Bay Shore neighborhood.

This postwar expansion was driven by Morningside’s near proximity to both Biscayne Bay and bustling Biscayne Boulevard, its high ground, and the beautiful Bay Shore neighborhood on its northern flank.   By the mid-1980s, developers had completed nearly eighty homes in the new subdivisions of Bay Shore Plaza and Park Plaza.  The dominant architectural styles governing these homes included the Florida Ranch style, a variation of the earlier Ranch style inspired by Frank Lloyd Wright’s Prairie and Usonian houses, as well as the Bungalow style from an earlier time in the 20th Century. Characteristics of this style include homes constructed of concrete block, usually one-story in height, overhanging roof eaves, longitudinal placement on the lot, and low-slung horizontal massing.  Further, these homes contain prominent attached garages facing the front, a porch, decorative wrought metal porch railings, and even a brick veneer employed as an ornamental element over a portion of the façade.

Another common design found in “Morningside South,” as it is often called, is the Mid Century Modern or Miami Modern, a style seen in many parts of Greater Miami, including Miami Beach and the Mi-Mo/Biscayne Boulevard Historic District north of Morningside. “Mi-Mo” is characterized by flat roof slopes and overhanging eaves, often creating a small porch, large metal-framed windows, portions of the façade clad with brick or stone veneers, and pipe columns. 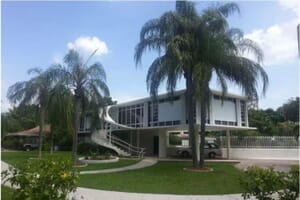 Several prominent mid-century architects, headed by the brilliant Rufus Nims, designed homes leverage the Mi-Mo architectural style.  Nims’ Jetson House is, in the mind of this writer, the most stunning design in South Morningside. Designed and built in 1949, this residence is a prime example of “tropical modernism” while its Jetsons name was inspired by its futuristic curves. Located on two lots on the northeast corner of N.E. 5th Avenue and 52nd Terrace, the building is a two-story, glass walled concoction with a swirling external stairway floating above a minimalist garden.  On the back side, the building looks out over a stunning swimming pool.  The second floor hosts the major components of the house, which include 3-bedrooms, 3-baths, and a large, open reception area with plenty of light, as would be expected. In November 2020, the home sold for $1.4 million.

A third style found in this postwar neighborhood is the Masonry Vernacular style, a reference to homes not belonging to any defined style.  Many of these masonry buildings stand two stories tall and include pitched tile roofs with wide eaves, and generous applications of ornamental plastering.

In recent years, young, affluent homeowners have moved into South Morningside resulting in both the demolition of extant homes and major alterations of those some have elected to preserve. Not surprisingly, some controversy has arisen.  Even the 48-acre Morningside Park, discussed above, has not escaped controversy as factions have arisen over the fate of the large swimming pool, which needs repair, the roadways bringing motorists into the park, and the future of the busy basketball court. 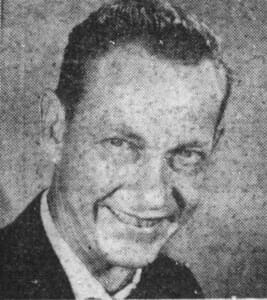 While the beautiful northern portion of Morningside, as noted, is a prized historic neighborhood, commanding ever higher prices for its housing stock, the southern portion can make a similar claim of being a coveted neighborhood as evidenced by its increasingly affluent residents and the improvements some of made to their properties.

The southern portion of Morningside can also point to the “celebrities” who have visited and, in the case of Pope John Paul II, stayed there. The pope’s memorable stay at the home of the then Archbishop of the Diocese of Miami, Edward McCarthy, over the course of one night in September 1987.  Across the street from the home of the late Archbishop McCarthy is Morningside Park, itself the venue for famous persons like Muhammad Ali, who played himself in “The Greatest”, some scenes of which were filmed in the park. Other movies that claimed the park for one or more scenes included “Wrestling Ernest Hemingway” and “Cocoon: The Return.”

The northern portion of Morningside is a textbook example of the advantages and enticements of residing in an historic neighborhood. Morningside South, however, struggles to keep its original housing stock, as noted, amid the challenge of some new homeowners who have introduced substantial changes to their homes. In the minds of some preservationists, this trend has left this attractive neighborhood under siege.