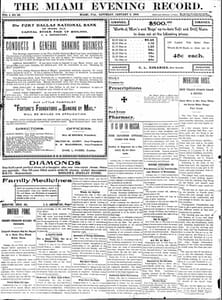 On September 15, 1903, Frank B Stoneman reorganized and moved the Orlando Record to Miami and renamed it the Miami Evening Record. Stoneman was the editor of the Orlando Record at the time of the change. He was partnered with Ashley and Athos LaSalle when the trio decided to relocate to Miami. He was also the father of Marjory Stoneman Douglas.

The Miami Evening Record had early success competing with the Miami Metropolis, but suffered a financial setback following the Panic of 1907. The collapse of the Fort Dallas Bank, and loss of confidence in the remaining financial institutions in town, led to a recession that negatively impacted the newspaper.

The Evening Record reorganized in December of 1907 and began publishing and distributing the paper in the morning. It was during this time that the paper changed its name to the ‘Miami Morning News-Record’. However, the paper continued to have severe financial difficulties and was nearly bankrupt when a prominent attorney in town purchased the publication. After the sale of the paper,

Through a loan from Henry Flagler, Frank B. Shutts acquired the paper and renamed it the Miami Herald in the Winter of 1910. Shutts was also the founder of the Shutts & Bowen Law Firm. He was brought down from Indianapolis by Henry Flagler to oversee bankruptcy proceedings of the Fort Dallas Bank. He decided to stay and formed a partnership to practice law in Miami in 1910.

The Herald published its first article on December 1, 1910. The Miami Herald became the largest newspaper in the world during the land boom of the 1920s. The size of the paper was mostly attributable to real estate ads. However, during the Great Depression of the 1930s, the paper came very close to bankruptcy.

On October 25, 1939, Shutts sold the paper to John S. Knight who became editor and publisher of the Miami Herald. Knight appointed his brother, James, as business manager for the paper. In 1974, the newspaper merged with Ridder Publications and formed the Knight-Ridder Corporation. In 2006, Knight-Ridder was purchased by McClatchy Company. 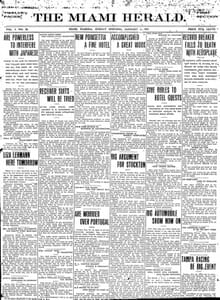 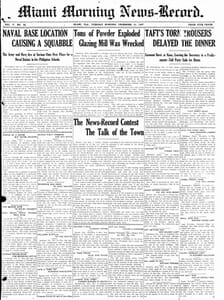