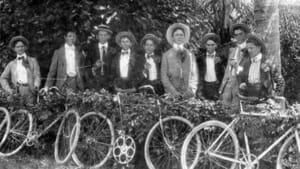 Cover: Freeman (second from right), and Roddy (last on right), Burdine behind Royal Palm Hotel in 1900.

When William and Mary Burdine moved their three boys and one daughter to Miami in 1898, they were on the verge of building the city’s most recognizable retail institution. While their two youngest sons, Roddy and Freeman, decided to join the family business, their oldest son, John Burdine, ultimately partnered with Eva Quarterman to operate a different retail establishment called Burdine & Quarterman.

Robert Freeman Burdine, who preferred to be called to by his middle name, was born in Verona, Mississippi, on May 15, 1884 to William and Mary Taylor Freeman Burdine. His middle name was his mother’s maiden name and he was the couple’s first born of four children.

When the freezes of 1894 and 1895 destroyed the citrus crops owned by the Burdines in central Florida, William moved the family to Bartow, Florida, and formed a partnership to establish a dry goods store with Henry Payne in April of 1896. The partnership didn’t last long, but it did provide William with enough experience to start a new retail operation by the name of William Burdine & Son. His partner in this venture was his son, John, from a prior marriage.

As fate would have it, circumstances would provide the Burdines with a new opportunity in a new city. When the Spanish American War broke out in 1898, William heard about a training facility that was being established in southeast Florida called Camp Miami. At the time, there were 1,200 residents in Miami when the federal government sent 7,000 volunteer troops for training prior to their deployment to Cuba. He figured that the newly established camp would need supplies, so he sent John with a wagon of merchandise to the encampment shortly after it formed. 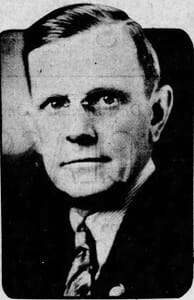 Once John arrived at the Magic City, it was clear that the area was in desperate need of the type of goods he brought from Bartow. He was completely sold out of his inventory within a day. He sent word back to his father who then decided to close his store in Bartow and move his business and family to Miami.

By 1904, Freeman was twenty years old and practicing law. After getting some experience in Miami, he became part of the firm Atkinson, Gramling and Burdine and moved to Apalachicola, Florida where he setup his law practice. In the next few years, he met and married his wife, Genie Moore, and began to not only establish roots, but also a reputation as a fine attorney.

Following the death of his father in 1911, Freeman returned to Miami to continue his law career as a defense attorney. He represented the “wets” in 1913 when a lawsuit was filed to challenge irregularities of voter registration in the rural areas of Dade County to determine the fate of the sale and consumption of alcohol in the county. When the election was held in October, the electorate sided with the “drys” and Dade County was alcohol free, in theory, seven years prior to National Prohibition.

Freeman was appointed chairman of the sale of war certificates, or bonds, for the City of Miami at the onset of World War I. It was his responsibility to promote and raise money for the war effort. Each city had a quota to help fund the country’s participation in the war and Miami exceeded its quota during Burdine’s tenure as the chairman.

On October 6, 1918, Freeman argued a case in front the of the Florida Supreme Court to challenge the constitutionality of the “quart a month” law, also known as the Wells packaging law, which prohibited the shipment of more than a quart of alcohol per month from a wet county to a dry county. He was representing James Frances, described as a “Dade County negro” in a Miami Metropolis article covering the case, who was convicted of violating this law. The supreme court refused to change the decision and the law remained in effect until National Prohibition was ratified in 1920. 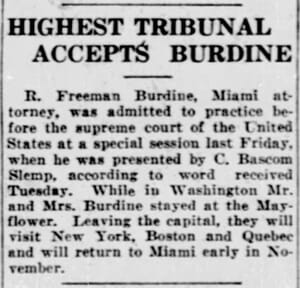 In October of 1921, Freeman left Atkinson & Gramling to form a short-lived partnership with A.B. Small called Burdine & Small. The partnership was dissolved in the summer of 1922, leading Freeman to partner with Samuel J. Barco to establish the firm of Burdine & Barco in the winter of the same year. The new firm practiced in office space above the Burdines Department Store initially, but later moved into the Bank of Bay Biscayne when it opened in 1926. One of Burdine’s proudest moments as an attorney was when he was admitted to practice before the U.S. Supreme Court at a special session in October of 1928.

Although Freeman was very busy with his law practice, he also held the title of secretary and treasurer for Burdines, Inc. In March of 1929, he was pivotal in the reorganization of the company to prepare it for future growth. The intent of the organization was to change the charter from distributing profits as dividends to providing the entity to reinvest profits back into the business. The restructuring required the voluntary dissolution of the old corporation and creation of a new entity. There were no changes in the personnel of the executive team, but the legal entity had to be modified and the details of this change were administered by Freeman.

In the fall of 1929, Freeman and his wife took a vacation to Europe for rest and relaxation. However, during the couple’s travel to Europe, he got sick. In early November, his illness got worse and he was bed ridden while in Rome, Italy. On November 6, Freeman was found unresponsive and was pronounced dead from complications of pneumonia. He was only 45 years of age at the time of his untimely death. 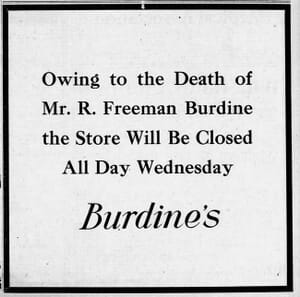 His family and all of Miami were in shock to hear the news of Freeman’s passing. It took a week and a half to return his body from Italy back to Miami, which is why his funeral was not conducted until November 19. In honor of Freeman’s memory, all entities of Burdines, Inc. were closed on the day of his funeral. There was a viewing at his home at 1452 Brickell Avenue followed by rites at Trinity Episcopal Church. He was buried in the family plot at the Miami City Cemetery.

While Roddy was probably the best known of the Burdine boys, Freeman accomplished a lot in his 45 years and helped shaped the growth of both the city and the family’s namesake retail organization. Burdines would continue to be one of the most recognizable brands in Miami long after the family members that built that brand were gone. Federated, who purchased Burdines in 1956, changed the name from Burdines Department Store to Burdines-Macys on January 30, 2004 and then to just Macys on March 6, 2005. While the name is not as recognizable today as it once was, Burdines will always be known as the “Florida Store”, and the contributions of the family members who built that brand will be etched in Miami’s history as some of the city’s most important early pioneers.