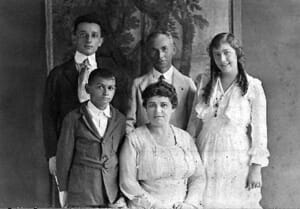 On February 6, 1896, Isidor Cohen arrives in Miami, three months ahead of the arrival of the first train. Although the Sewell brothers held a different belief, Cohen was considered the first merchant to open a store just prior to the incorporation of the City of Miami. He opened a clothing establishment on the south side of the Miami River.

It wouldn’t take long for Cohen to realize that all of the activity was on the north side of the river, and he promptly closed his south side store and reopened it on the north side near the corner of 12th Street and Avenue D (later called Flagler Street and Miami Avenue).

Cohen rounded out his resume through his involvement in many other organizations in early Miami. He was also considered Miami’s first permanent Jewish settler.