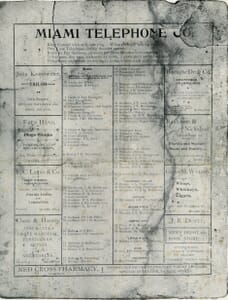 The City of Miami was granted telephone service in December of 1898. The Miami Telephone Company was incorporated in 1899 and began offering telephone service on February 24, 1899. The first switchboard operated out of the Red Cross Drugstore which was in downtown Miami at the corner of today’s Miami Avenue and SW First Street.

The company moved their location to 314 Twelfth Street (Flagler Street), by the time they printed their first phone directory in 1902. Telephone lines were extended to Lemon City and Coconut Grove within a few years of offering service. The company was the first to broadcast music in Miami by transmitting songs from the switchboard to subscribers who listened on their telephones. 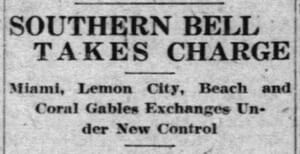