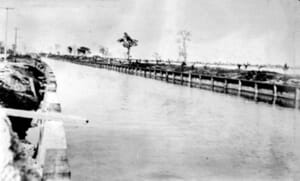 On July 22, 1912, work began on the Collins bridge to connect Miami to the future Miami Beach. John Collins used material extracted while digging the Collins Canal as fill for the roadbed. However, several obstacles slowed the project to a standstill by the winter of 1912.

One of the biggest obstacles was that Collins did not anticipate the cost to prepare the pilings to support the bridge. He needed to provide a jacket of cement at the base of each piling to ensure proper stability. The cost to lay cement below the surface cost Collins $50,000 per mile.

Collins was only able to complete the bridge part of the way to the future Miami Beach by November of 1912. It was considered “a skeleton in the bay” by the man who eventually became the savior of the project. 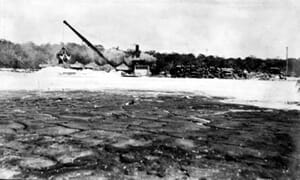 Construction resumed when Carl Fisher decided to invest in the bridge in exchange for land. Fisher made a lot of money when he sold his company to Union Carbide a few years earlier. With Fisher’s investment, the bridge was completed and eventually opened on June 12, 1913.