As part of his agreement to accept land from Julia Tuttle and the Brickells in October of 1895, Henry Flagler committed to extending his railway, building a “fine hotel” and laying out the infrastructure of an area along Biscayne Bay at the mouth of the Miami River.  Within eight months, the area would incorporate and become the City of Miami.

Following the freezes during the winter of 1894 – 1895, Flagler accepted the offers from Julia Tuttle and the Brickells. He wanted to ensure that he had a destination in an area that would be free from future freezes. The result of the portion of the agreement to build a “fine hotel” became the Royal Palm Hotel.

The Opening of the Royal Palm Hotel Clearing of grounds of Royal Palm Hotel in 1896

The process to build the hotel and description of the Royal Palm was detailed in an article entitled “Miami’s First Luxury Hotel” on Miami-History. The clearing of the grounds for the hotel began on March 15th, 1896. The supervisor for this effort was one of Flagler’s trusted lieutenants, John Sewell. His crew was small but skilled at performing the back breaking work of clearing difficult areas for new construction. Sewell referred to his trusted crew as his “black artillery”. Each of the men in the crew were black workers brought down for the project.

Joseph A. McDonald was in charge of the building of the hotel. He was the builder of all of Flagler’s hotels along the east coast of Florida. This would include the building of the Ponce De Leon, Alcazar and the Flagler Memorial Church in Saint Augustine. He also built the Ormond Hotel in Ormond, Florida. McDonald continued his work in Palm Beach to build the Royal Poinciana Hotel, the Breakers and Flagler’s home for whom Flagler built for his third wife as a honeymoon gift.

John Sewell described the building of the Royal Palm Hotel as “rushed” and was ready to open “in a blaze of glory” on January 1st of 1897. The opening on January 1st was a soft opening. The official open date was on Saturday, January 16th. However, the festivities to celebrate the opening of the hotel took place the next evening on Sunday, January 17th.

The grand opening banquet marked the beginning of the Royal Palm Hotel as a destination for wealthy captains of industry and political figures of the day. The opening night would feature 40 prominent townspeople in addition to hotel guests. Each would enjoy an elegant banquet in the hotel’s spacious dining room.

The guests were dressed for the occasion. Sewell reflected on the evening as “I look back through the wheels of memory and see that great dining room with all the beautiful women and handsome men, the ladies in their gorgeous costumes and the men in conventional evening dress”.

As Thelma Peter’s described in her article Pomp and Circumstance, The Royal Palm Hotel, “the dining room was resplendent with flowers, gleaming silverware and fine linen. The menu ran a gourmet’s gamut from green turtle soup to tutti-frutti ice cream.” The menu was considerably more extensive than Peter’s brief description, and included an entrée of pompano fish.

Following dinner, guests were ushered into the hotel’s rotunda to listen to the Royal Palm orchestra. The orchestra entertained the audience with popular songs of the day including “My Old Kentucky Home”. The night would continue in the hotel’s ballroom where the guests enjoyed music and dancing. The night was as elegant and grand as the banquet’s guests had hoped. 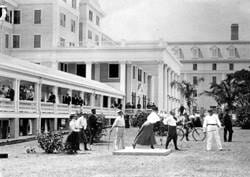 While the charter for the City of Miami explicitly stated that it must be dry, the one exception was Flagler’s Royal Palm Hotel. From the night of the grand opening, the hotel was the center of celebrity spotting and entertainment for the young city of Miami. Even after the tourist season concluded, the local residents could pay to enjoy the hotel’s pool during the summer months.

During the spring of 1898, prior to the beginning of the Spanish American War, Henry Flagler wired his friend and rival, Henry Plant, to visit the magical City of Miami. Plant, unfamiliar with the development on the southeast coast of Florida, asked “where on earth is Miami and how do I get there?”. Flagler wired him back to go to the terminal station at Jacksonville, follow the crowd and he would land in Miami.

The guests of the hotel were high society, political power brokers and European royalty traveling incognito. There were plenty of prominent senators who would make Miami their annual winter destination. John Sewell relayed the story of the daughter of Senator Elkins of West Virginia getting involved with the Duke of Abruzzi of Italy. The report was that they were engaged to be married until the King of Italy objected because she was not of royal blood. Miss Katherine Elkins rejected the Duke’s proposal because she did not want to get married without proper recognition by the king.

It was said that the hotel looked like a special delegation from congress at times. There were many senators and representatives frequently spotted during the winter months. Marcus A Hanna, famous during the McKinley administration, and many of his associates were regulars at the Royal Palm.

Not to be outdone by the politicians, the great capitalists of the day would also frequent the hotel. The Astors, Vanderbilts and Goulds were just some of the prominent wealthy families represented at the Royal Palm during its heyday.

Standard Oil brought a number of executives to meet at the Royal Palm Hotel in the spring of 1900. There were more than a dozen representatives from the company. Sewell recalled that the party had shopped at his Sewell and Brother’s store on Flagler Street. John’s brother, Everest, had sold John D. Rockefeller three pairs of shoes, while one of the store’s clerks sold him a necktie. The clerk, Pat Railey, was honored to have had gotten the opportunity to have tied a tie on the richest man in the world at the time.

The Royal Palm would be used as the army headquarters as part of Camp Miami during the Spanish American War, office to the first mayor of Miami and location of some significant political decisions. It was believed that President Elect, Warren G. Harding, offered several cabinet positions during his brief stay at the Royal Palm Hotel while on vacation in Miami prior to his inauguration.

The Royal Palm was opened under the capable management of H.W. Merrill from its grand opening until 1907. Merrill chose to leave for New York to manage his own hotel. Joseph P. Greaves was appointed manager in 1908.

Prior to being appointed manager of the Royal Palm, Greaves ran the Alcazar Hotel in Saint Augustine. He became an invaluable asset to the running of the hotel until his death in 1928. The death of the Royal Palm’s manager would impact the decision to ultimately close the hotel for good just a couple of years after his death.

Henry Flagler called his greatest accomplishment the completion of the Key West extension to his FEC Railway. The monumental task of running a railway extension from Miami to Key West required a lot of ingenuity and time.

The project was started in 1905 and was ready for completion in January of 1912. Henry Flagler was 82 years old, but was intent on living long enough to see the completion of what he called his “life-long dream”. Flagler would take his personal rail car from Miami to Key West. Flagler was given the celebrity treatment as he inspected the final stop of his Oversea Railway.

In addition to the celebration in Key West, Flagler also planned an elaborate banquet at his Royal Palm Hotel in Miami. John Sewell referred to it as “the greatest banquet ever given at the Royal Palm”. The banquet featured a Congressional delegation from Washington, D.C along with plenty of Admirals and Generals.

Following the return trip from Key West, Flagler gave the out of town guests a night to relax. The banquet took place the next night at which time everyone gathered in the Rotunda of the hotel. FEC executives would escort congressional delegates and military leaders into the dining room for the banquet.

“The annex part of the dining room was the head of the table in a T shape and the main table extended out into the main dining room. Probably this table was two hundred feet long and one of the most brilliant banquet scenes that I have ever seen. The decorations of the dining room were gorgeous. It was strictly a stag affair, with all the men dressed in evening clothes. It was a wonderful sight in a most beautiful setting. When the speeches began, the ladies and other guests filled the main dining room and Mr. Flagler was praised to the sky in oratory. Sometimes he was laughing like a schoolboy, then again he would be shedding tears.”

It would be Henry Flagler’s last visit to his beloved Royal Palm Hotel. Flagler would have a fall at Whitehall, his home in Palm Beach, just a few months following the banquet. He was sick for nearly a year following his fall and passed away on May 20th in 1913.