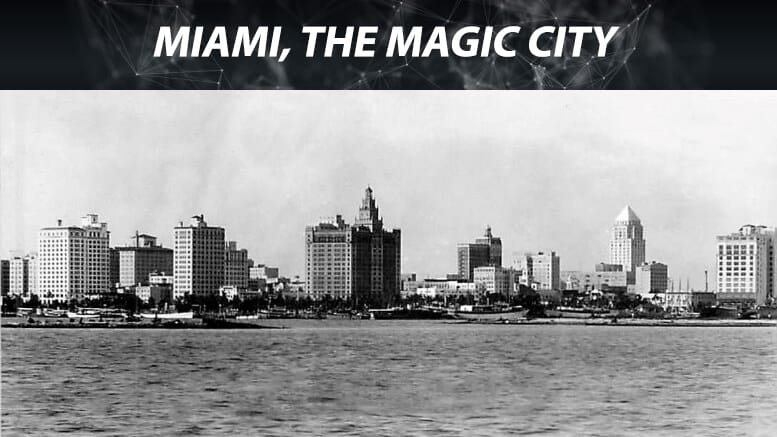 The moniker has become ubiquitous with the city that celebrates eternal summer. While it conjures a poetic and optimistic view of the metropolis it describes, it also infers that the municipality possesses a mystical aura. Given the rugged environs of the mangrove and hardwood hammock on which the city was built, it may have required a little magic to create enough of an opening to construct a small township, much less what would become a major US city. However, the challenges of constructing the city did not factor into the municipality’s nickname.

Miami has experienced many renaissances over the course of its relatively short history. Founded in 1896, it has become the destination of new beginnings for those who want, or in some cases need, a fresh start. Prior to ever visiting South Florida, Al Capone once famously referred to Miami as “the garden of America, the sunny Italy of the new world, where life is good and abundant.” It was not uncommon for Magic City to capture the hearts and imagination of people long before they spent any time in the area. It is this spirit that inspired the magical tagline forever associated with the city by Biscayne Bay.

Author of the Nickname 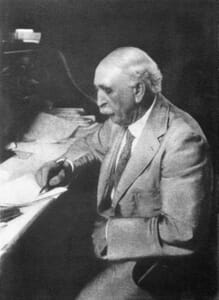 The nickname ‘Magic City’ is as old as the city it describes. Ironically, the man who gave Miami its timeless signature had never visited the quarters before he described it as magical. As the story goes, Ethan Vernor Blackman was working as a freelance writer in Daytona Beach when he was approached by Henry Flagler to write an article about a new city for a new magazine. The magazine was called “The Home Seeker” and Blackman’s article was printed in one of the first issues of the publication. The purpose of the magazine was to attract people to the burgeoning metropolis located in the sub-tropical paradise of southeast Florida.

After hiring the freelance writer, Flagler sent Blackman a letter with the blueprint for the city and pictures of the area to acquaint him with what was an unnamed city at the time, nestled between Biscayne Bay and the Miami River. The purpose of the article was to describe the beauty and economic potential of Flagler’s latest stop along the east coast of Florida.

Blackman was already captivated by Flagler’s enthusiasm, but after he reviewed the blueprint and pictures, he immediately saw the possibilities for the city. In an interview in the Miami News in 1925, Blackman said: “In looking over the material, I got so enthusiastic over the possibilities of the city that bordered on the Gulf stream and faced the broad waters of Biscayne Bay, that I referred to it as the ‘Magic City’.” Blackman included the nickname in his article although it was a sobriquet that was previously used to describe Birmingham, Alabama, during its tremendous population growth in the 1870s.

After completing the article for The Home Seeker, he sent a copy to the Jacksonville Times-Union as a form of early syndication. Within weeks after the article was published, other newspapers in the state were reporting on Miami’s progress and adding “the magic city” to the name of the burgeoning municipal in their news stories. It did not take long for the nickname to stick. Following the publication of the first issue, Blackman became the editor of ‘Florida East Coast Home Seeker’ magazine and held that position for the next sixteen years.

Adoption of the Moniker 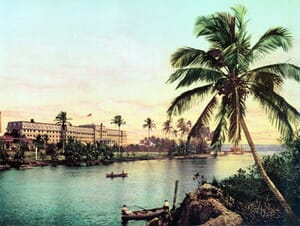 While his description of the city was not nearly realized when it was published prior to Miami’s incorporation in 1896, Blackman’s first visit to the area did not deter him from what many would have considered a premature designation of “magical” to a town under construction. He described what he saw as “nothing but palmetto and undergrowth over most of the city.” He went on to say that there were no accommodations to rent so he and his wife bought a houseboat and lived on Biscayne Bay until they could find “suitable habitation.”

Despite the rustic nature of the area at the time, Blackman believed the Magic City was everything he expected when he reviewed the pictures and blueprint for the city. He said that there was “the balmy air, the beauties of the bay and sky and the wonderful palm trees.” He was convinced more than ever to promote the nickname he gave it prior to arriving.

From the time he arrived in 1896, every bit of correspondence and every article he authored referred to his adopted city as “Miami, the Magic City.” He reflected on his one-man campaign nearly thirty years after first printing the moniker and declared that “the name stuck, and the town grew as the phrase stirred the curiosity of the outside world who eventually came to see it.” Through the years, the nickname was printed consistently in advertisements in newspapers and magazines, and even on license plates. There were many businesses, from service stations to entertainment venues, that have included the nickname in the description of their organization.

However, the name was not readily accepted by all of Miami’s early residents. Despite a campaign in the early 1900s to alter the name to ‘The Wonder City’, the tagline of ‘The Magic City’ prevailed and has remained the official nickname of the city of Miami for the past 125 years.

Impact of a Name

Given Blackman’s persistence in evangelizing the Magic City nickname, he was once challenged on why the name was so important. Ethan responded:

“That saying about ‘what is in a name’ was all right for the days before national advertising. Maybe a rose by any other name might have as good a perfume, but a city called ‘Pinckneyville, the Punk City’ would have difficulty in attracting tourists. In a country that sells soap or builds cities by slogans, it is mighty important to get the right one to start with, because once it gets attention, it is there to stay.”

Blackman knew that Miami needed to grow into the name he gave it and with each passing decade, the city would reinvent itself in a way that some would describe as magical. Miami was the fastest growing city in the United States in three of the ten decades of the Twentieth Century: 1910s, 1920s and 1940s.

When the country ushered in the roaring twenties, real estate disappeared faster than it could be drained. When soldiers got sand in their shoes during World War II, they reappeared at the conclusion of the war as if they were transported back to Miami by magic wand. Even today, tourists who travel to Miami are captivated by the magical year-round temperate weather, tropical beauty, and festive environment, with some vowing to return to the Magic City to make it their home.

Just like every major city in the world, Miami has its share of problems. It has even been given the motto “a sunny place for shady people”, but it has never lost its allure, or dare I say it, its magic. In retrospect, Blackman’s moniker was probably too grandiose to describe a frontier that had not quite developed into a city.

However, he was right when he believed Miami needed an ambitious nickname to fulfill the vision described by the city’s founders and early champions. Henry Flagler, Julia Tuttle, Bill and Mary Brickell as well as many other early pioneers knew they were building something special in southeast Florida. The branding of what was being built was brilliantly articulated by Blackman sight unseen. As we approach the city’s 125th birthday on July 28, 2021, it is safe to say that not only has the meaning of the ‘Magic City’ nickname grown tremendously with time, but so has the city it describes.