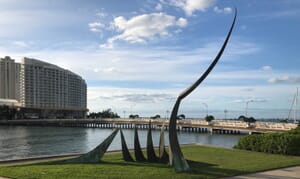 On April 30, 1986, the 33-story Lincoln Tower reached a milestone when it was announced that it was officially topped-off and on schedule to open in the Summer of 1986. Two weeks later, the project’s owners revealed another important milestone for the building that would become the offices of Barnett Bank at 701 Brickell Avenue. Bank of America is now the marquis tenant in the building today.

The Lincoln Property Company, in partnership with the Metropolitan Insurance Company, announced that they commissioned Boston-based John Raimondi to create a large sculpture to be placed on the bay-side of the tower’s property. At just 38 years of age, Raimondi, who had an affinity for artwork that supported conservation and honored endangered species, was one of the hottest American artists at the time.

Raimondi was tasked with creating the largest bronze sculpture in North America for this project. Once it was complete, the sculpture was 38 feet in height and 78 feet wide, requiring ten tons of bronze to shape into an abstract representation of an eagle’s wing. When asked about the cost of the materials, Raimondi said that he used $100,000 of bronze to create the sculpture. He did not indicate what he was paid, but speculation had his compensation in the high six-figure range. The artist called the sculpture ‘Aquila’, which is Latin for eagle, aligning with Raimondi’s desire to honor endangered species. 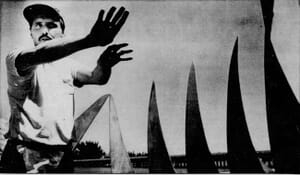 When the sculpture was installed along the bay, behind Lincoln Tower, Leslie Judd Ahlander of the Miami News described it as “its soaring forms of verdigris green are beautifully sited against the bay”. Inspecting it for the first time after installation, Raimondi was quoted as saying: “I’m very pleased to see the manatees, the porpoises, and blue herons coming by here, that’s what I wanted.” He felt the sculpture provided a symbolic kindred spirit between Brickell’s modern skyline and its natural environs.

The art of welding bronze into a shape the size of Aquila was considered a lost art by the mid-1980s. Harry Rand, an art expert at the National Museum of American Art, considered the sculpture significant because of “its size and virtuosity of the fabrication.” He went on to say that bronze had not “been fabricated on a scale like that.” 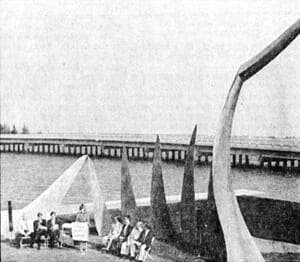 The dedication of the sculpture was conducted on May 1, 1987. Many may remember the sculpture making a cameo appearance as a prop in the movie “Something About Mary” in 1998, more than ten years after its dedication. Today, hundreds of Brickell residents and visitors pass by this magnificent work of art on a daily basis, most probably not knowing its origin or story.

While the name of Lincoln Tower has changed several times since 1987, the sculpture continues to inhabit the shoreline of Biscayne Bay as a reminder of how development, art and nature have come together in one of America’s fastest growing urban settings.

In closing, the best description of this fine work of art was provided by Carl Belz, director of the Rose Art Museum, when he wrote the catalog forward for Aquila:

“To Soar like the eagle may not be within our power. We know the kinesthetic sensation nonetheless, and that sensation is in this instance dramatically heightened by the sculpture’s placement before sea and sky, before vast and immeasurable spaces that impel our thoughts toward freedom.”