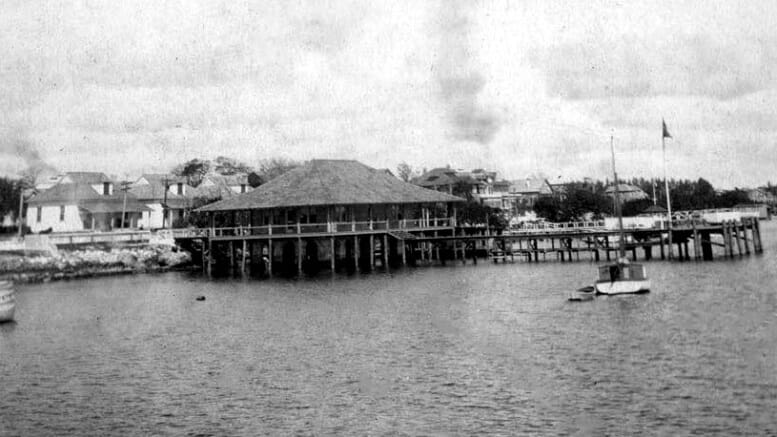 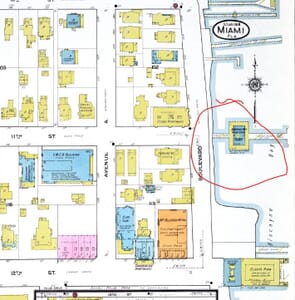 The cover photo is a picture of the Biscayne Bay Yacht Club at the end of Eleventh Street (NE First Street in today’s address scheme), on Biscayne Bay. The clubhouse was built on a dock at the end of the street leveraging riparian rights donated by Henry Flagler. The club was constructed in 1909 and opened on February 15, 1910.

The club unofficially began in February 1887 when Coconut Grove resident Kirk Munroe suggested a boat race on Biscayne Bay to celebrate Washington’s birthday. The race was considered a great success and Kirk and Ralph Munroe, no relation, decided to form the Biscayne Bay Yacht Club in May of 1887. Ralph Munroe was named the first Commodore and Kirk Munroe was named Secretary of the club.

“The first permanent clubhouse, in 1892, was the second floor of Commodore Munroe’s boathouse where it remained until 1905. It then moved into its own building, a two-story structure built on pilings on the end of a dock, a few feet southwest along the shore from the original site, but still on the Commodore’s property.” 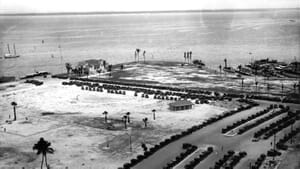 The club made its move to downtown Miami in 1910 where it resided until the process of dredging to create land for a park began in 1924. Once Bay Front Park was complete, a new clubhouse opened on the southeast corner of the park in 1925. However, the great hurricane of September 1926 damaged the building, the club’s property, and records and led to the abandonment of the building shortly after the storm. Given the devastation of the hurricane and the end of the building boom of the 1920s, many of the club’s members sold their yachts and resigned from the club.

The remaining members continued to meet at Commodore Matheson’s office on S.W. Second Avenue and the Miami River for the next six years. In 1932, Matheson was instrumental in acquiring land along South Bayshore Drive in Coconut Grove to build the clubhouse that is still in use today.