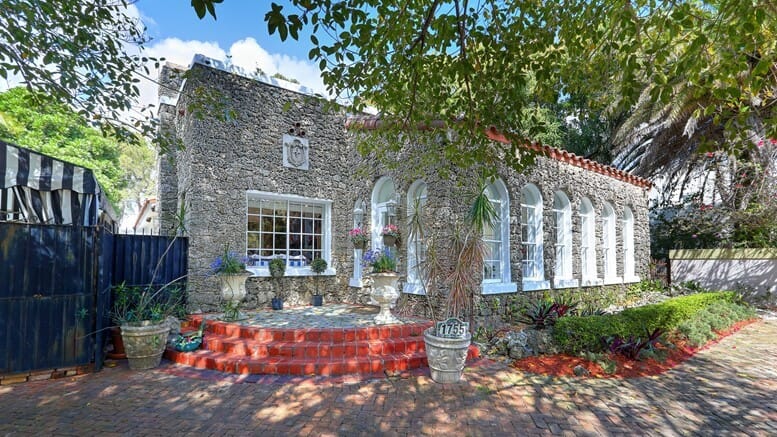 In the heart of Miami’s historic Shenandoah neighborhood is an oolitic-limestone rock house located at 1755 SW Tenth Street showcasing many of the architectural features and building materials of the Miami of yesteryear. The neighborhood was a product of the great building boom of the 1920s, a time when Southeast Florida witnessed unprecedented growth during a time of prosperity in America.

The development of Shenandoah was enhanced by the proximity to the Tamiami Trail, also known as South Eighth Street, or by many today as Calle Ocho, which provided a road through the Everglades to travel from Tampa to Miami by car. The opening of the Tamiami Trail provided in the 1920s opportunities for hotel operators to offer lodging for visiting tourists, and real estate developers to construct new housing for those who decided to make Miami their home. 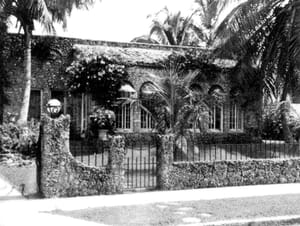 The bungalow located at 1755 SW Tenth Street was constructed in 1924 during the peak of the building boom. The residence features an oolitic-limestone exterior façade and uses the native rock throughout the home. This style of rock was milled, and shaped into building material, in and around South Florida. It was often extracted from ridges near the coast in places like today’s Brickell neighborhood.

The home is part of the Shenandoah Addition, which was developed beginning in 1923, at what was once the J.L. Hickson Grove. This orchard was best known for growing the Haden variety of mangoes.  The designer of record for the Shenandoah Addition was Biscayne Engineering, which was the oldest civil engineering and surveying firm in Miami. The city commission approved the plat for the new subdivision on May 15, 1923.

As part of the approval, the Shenandoah Addition subdivision had a restriction that all homes had a minimum price and were required to be built of masonry. This resulted in the construction of locally adapted Spanish Bungalow and Mediterranean Revival designed homes for this quarter of the neighborhood.

Owners Through the Years 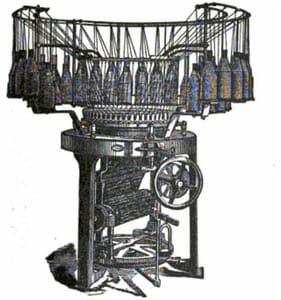 The first owner of 1755 SW Tenth Street was John Hepworth, who purchased the home in 1924 after he sold his knitting machinery manufacturing business in Philadelphia, Pennsylvania. He had the distinction of producing the ‘Hepworth Knitting Machine’ which allowed for the automation of knitting garments in a fraction of the time of the traditional hand stitched approach at the time. Hepworth lived in the home until his death in 1927.

The next owner was Joseph Elmer Glick, who had the distinction of living in the home the longest. Glick, also from Philadelphia, purchased the home from the estate of John Hepworth in 1928, and lived in the home for fourteen years until his passing in 1942. He was a purchasing agent for a dental corporation during his working years while living in the residence.

Nolan W. Worley, who sold his Wardy’s Grocery and Bar-B-Que business in Birmingham, Alabama, prior to moving to Miami, purchased the home in 1945. Upon his arrival in Miami, Worley changed careers and began to buy and sell property, operating his real estate firm out of his home on SW Tenth Street for the first few years. He owned the home for eleven years and sold it in 1956.

The next owner was a well-known Latin band conductor when he purchased the residence in 1957. Jorge “George” Fasola traveled the world performing with his internationally known Latin jazz band. He was frequently booked at the Bamboo Room in the Roney Plaza Hotel on Miami Beach, and the Coral Regis at Coral Way and Thirty-Six Avenue in Miami. Fasola lived in the residence until 1963.

The current owner of 1755 SW Tenth Street is architect Anne Jackaway. She has restored and modernized the property in the six years she has owned it, and has added significant foliage to the landscaping of the property. One legacy feature to the estate is a large, mature mango tree that still bears fruit and may date back to the days of the Hickson Grove more than one hundred years ago. If not a vestige from the orchard, it may be a descendant on one of the trees from that foregone era.

The property is currently for sale and the pictures, and a video tour, can be found at Miami Stone House. The property and residence harken back to the suburbs of the Miami of century ago. For a step into the Miami of the Roaring Twenties, take the video tour available on the link.