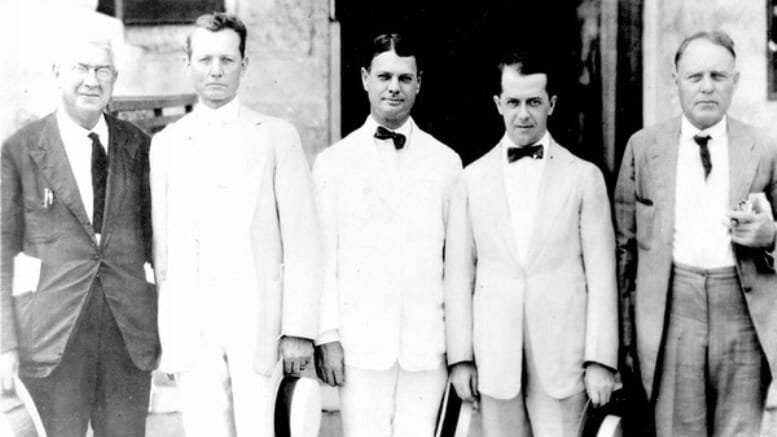 Miami City Commission in 1921. Ed Romfh in the middle.

Those who took a chance on the fledgling city of Miami in the late 1890s understood that the municipality offered boundless opportunity but required versatility. From prior to incorporation until the start of the Twentieth Century, pioneers came to Miami seeking prospects to make a name for themselves. Edward C. Romfh was exactly the type of pioneer who applied his versatility and capitalized on the opportunity offered by a young city. In doing so, he is remembered with reverence in the lore of Miami’s early history.

Romfh served as bank president, city commissioner, mayor and the municipality’s calming influence during difficult times. While he had to ward off multiple runs on his bank, Romfh relied on his fiscally conservative business practices to survive financial meltdowns. During a period when others got caught up in what seemed like unfettered growth and prosperity, Romfh stuck to his principles. When he was mayor of the city during unprecedented expansion followed by disaster, Romfh’s restraint and cool demeanor helped provide leadership during trying times. He was truly a pioneer in both spirit and accomplishment. 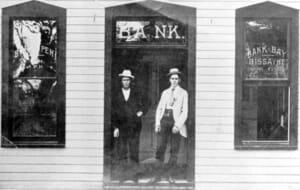 Edward C. Romfh was born on February 8, 1880 in Camden, Arkansas to George and Elvira Romfh. Shortly after his birth, the Romfhs moved from Arkansas to Altoona, Florida. The family would also live in Titusville and Atlanta, Georgia during Ed’s youth.

When he was ready to branch out on his own, Ed moved to Miami in 1898. After working odd jobs, he got a position with the Bank of Bay Biscayne as a bookkeeper. After gaining experience in banking, Romfh reflected on Miami’s growth and determined there was an opportunity for him to setup another bank in the Magic City. 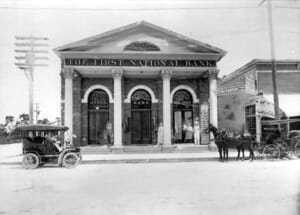 As a bookkeeper for the Bank of Bay Biscayne, Ed Romfh had experience in banking but did not have enough capital to start his own financial institution. However, what Ed lacked in capital, he compensated by having the ability to convince his business contacts with money to invest in his new venture. He convinced E.M. Brelsford, who became the president of the bank, W.H. Spitzer, who became the first vice-president, E.A. Waddell, who became the second vice-president, all to invest in the financial institution that was established as the First National Bank. Other investors in the institution included William H. Graham, William Burdine, and James E. Lummus. Romfh later recalled starting the bank with what he fondly referred to as $50,000 of borrowed money. Given his status as a founder, Romfh became a board member, but his first title with the bank he founded was “cashier”.

First National Bank was officially perfected on June 10, 1902 and opened for business on

December 1 of the same year. The bank collected $52,820 in deposits just in its first day. The institution constructed a modest one-story bank building at the northeast corner of Avenue C and Twelfth Street, or NE First Avenue and Flagler Street by today’s address scheme. It was completed by the time the bank was ready to open for business in December.

By 1910, Ed Romfh was promoted to bank president, a role he would hold onto until his retirement in 1946. By February of 1921, the bank had grown tremendously with deposits of more than $6.5 million. The growth of the bank necessitated the need for a larger building to conduct business, which led to the erection of a modern ten-story edifice on the same site as the original building. The building was completed and opened on November 14, 1922. It still stands today on the same corner as the First Flagler Condominium building. 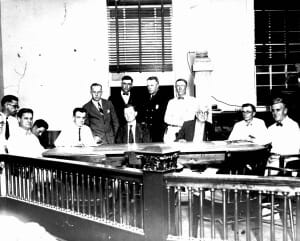 Like so many other Miami pioneers of the day, Ed Romfh was involved in local politics in addition to being an important member of the business community. He served as councilman, and then later as commissioner, for the city of Miami. At the time he was overseeing the opening of First National’s new bank building, he was also running for mayor of the city, an election that he eventually won.

Romfh was sworn as mayor in 1923 and served in that role until 1927. During his tenure as mayor, the city of Miami experienced the highs of the building boom peak to the lows of the 1926 Hurricane. In both situations, Mayor Romfh provided measured and calm leadership.

At the peak of the boom, there was a feeling of invincibility and exuberance by all those rushing into Miami to reap their fortune. Some of Miami’s business leaders and real estate speculators were critical of Romfh for being cautious in approving bank loans during this time. His fiscal conservatism served the First National Bank well when the boom came to a crashing halt in 1926.

After the devastation and economic free fall that followed the 1926 Hurricane, it was Ed Romfh’s calm demeanor as mayor that inspired confidence in the citizens that the city would return to normal. Miami residents fondly remember Romfh as a comforting and decisive leader during a very dark time. The hurricane, which was the final blow to end the building boom, propelled South Florida into the Great Depression three years earlier than the rest of the country. 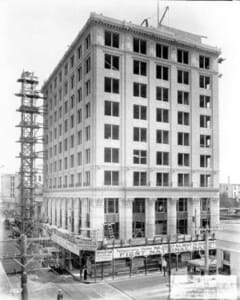 When he reflected on his career, Romfh said that he had to endure more runs on his bank than he cared to remember. First National Bank survived the Panic of 1908, which forced Fort Dallas Bank into bankruptcy, and all the runs that took place following the stock market crash of 1929.

Like so many other financial institutions in Florida, by the peak of the building boom in 1925, First National Bank had grown its deposits astronomically. They recorded deposits of over $66 million during its peak. However, by the fall of 1931, that number had dropped to around $11 million. During a run on the bank in the summer of 1931, Romfh had flown $2 million of cash from Jacksonville to protect against running out of money when depositors insisted a full withdrawal.

It was at this time that a line of bank customers went out the door and around the block. Romfh walked about the lobby and reassured the crowd: “We are going to pay every depositor; we are not going to fall.” Given Romfh’s conservative business practices and the bank’s proximity to the post office, he was able to deliver on that promise. Because the bank was one block south of the post office, many who received money orders via the postal service chose to deposit those orders into First National Bank. This ensured that the bank had more cash on hand than their competitors in town. 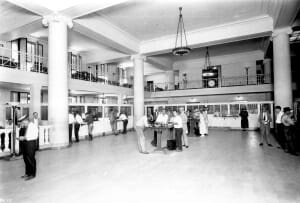 During the Panic of 1933, which occurred around the time Franklin Delano Roosevelt was being inaugurated, Romfh was once again able to hold off running out of cash during the panic. The day after his inauguration, Roosevelt declared a four-day bank holiday to quell the panic. He then conducted a fireside chat radio broadcast where he assured the American people that the banks are safe and there was no need to withdraw their cash and close their accounts.

Given his conservative nature, Romfh was opposed to the idea of the bank holiday. Even after Roosevelt’s order, First National stayed open for 24 hours to ensure all depositors could conduct their business. Romfh was quoted as saying: “Banks are either good or bad. They should take care of themselves.”

In the end, First National Bank was one of two banks in the state of Florida to survive the Great Depression. By the time Ed Romfh sold his interest in the financial institution in 1946, it was the largest bank in Florida. 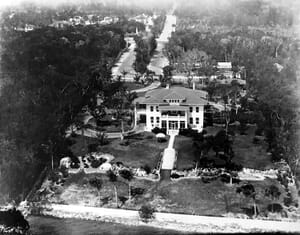 In addition to his responsibilities as president of First National Bank and roles on the city commission and as mayor, Ed Romfh had many business and social affiliations. He served on the board of other financial institutions such as First Trust and Savings Bank of Miami, the Little River Bank and Trust, and the Coral Gables First National Bank. He was a member of the exclusive Bath and Surf clubs of Miami Beach as well as the famed “Committee of One Hundred”.

However, by April of 1946, health considerations required him to make some changes. He sold his interest in First National Bank and retired from the board and committee seats. His health continued to decline over the next five plus years until he passed away at his home at 3149 Brickell Avenue in Miami on January 16, 1952 at the age of 71.

Edward Romfh left a legacy of commercial leadership and civic engagement. While he may have been too busy to notice, the sleepy little city that he chose to call home in 1898 had evolved into one of the fastest growing cities in American during his almost five decades as a prominent citizen. In 1900, the city of Miami had a population of 1,681 residents. By the time of his death in 1946, that number grew to more than 200,000. It has more than doubled since that time.