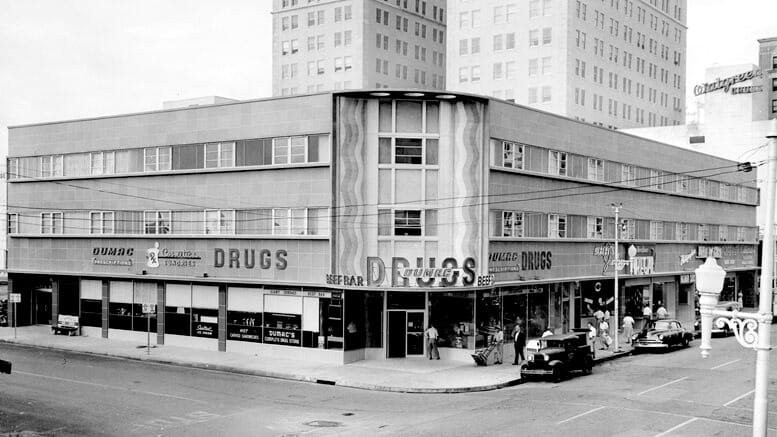 A caption found in the Miami Daily News on October 18, 1949, announced that the First Presbyterian Church in downtown would be razed that week. It suggested that citizens can get one last look at the historic church before it is replaced by “an ultra-modern streamlined office building with store fronts.”

One sentimental old woman stood across the street from the church edifice weeping on the eve of the building’s demolition. A reporter asked her if she were okay, and the woman replied that she was married in the chapel many years earlier. She couldn’t bear the thought that downtown Miami would no longer be the home of the church she attended most of her adult life. However, by the Fall of 1949 the congregation had already made the decision to relocate to Miami’s Brickell neighborhood.

Rather than sell the land that was donated by Henry Flagler in 1898, First Presbyterian chose to lease the two parcels of property which provided the land for the church and rectory from the time of its first service in 1900. The fate of the downtown chapel was officially decided when representatives for the church signed a lease agreement with the Roper Corporation in the Spring of 1946.

When the congregation made the decision to rent their downtown property, they had to account for two distinct parcels of land which could be leased separately. The northern parcel was located on the corner of Flagler Street and SE Third Avenue, and the southern parcel was on the corner of SE First Street and SE Third Avenue. Both parcels were contiguous spanning the avenue.

The church reached their first agreement with the Roper Corporation on May 19, 1946, for a 99-year lease at annual rental rate of $46,600 which totaled roughly $4.6 million over the course of the contract. The property spanned a frontage of 170 feet on Flagler Street, and a depth of 100 feet along SE Third Avenue. The chapel resided on this parcel of land.

At the time this contract negotiated, some members of the congregation advocated for a new church to be built on the southern parcel of land, rather than leaving downtown Miami. They reasoned that it would be easier for hotel guests to attend service if the church remained downtown. However, the church chose to use proceeds from the down payment on the lease to purchase property in the Brickell neighborhood, which is where they ultimately relocated.

Between the two leases, First Presbyterian enjoyed an annual income of $74,100 from these leases, which made the congregation, as a writer for the Miami Daily News wrote, “among the richest churches, from the standpoint of income, in the United States.”

Demolition of Downtown Church in 1949 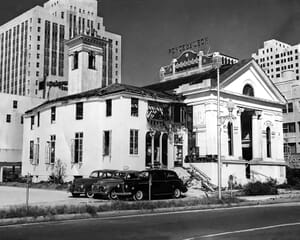 It was April of 1898 when Henry Flagler asked the pastor of the First Presbyterian Church to meet him on the corner of Royal Palm Way and Twelfth Street, which is today’s SE Third Avenue and Flagler Street in downtown Miami. When Reverend W.W. Faris arrived at the corner, he saw stakes laid out in the outline of a chapel and a nearby pastor’s home. Flagler announced that the corner would be the new location of the church and that he would finance the construction of the buildings.

By February of 1900, the church and rectory were finished, and Flagler was there to personally hand over the keys to the pastor himself. The chapel was dedicated and held its first service on February 25, 1900, which was described in a story published in the Miami Metropolis on March 2, 1900. The article speculated that the total cost of constructing the church and rectory, which was completely paid for by Flagler, was roughly $40,000.

Nearly fifty years later, the same newspaper, which was renamed to the Miami Daily News in 1920, ran a story announcing that the last service in the downtown chapel would take place on September 11, 1949. The church was scheduled for demolition a month after the last service.

Following the final service, Dr. W.K.C. Thomson, the pastor in 1949, made it a point to move as much of the interior of the downtown church to the “little chapel” at 609 Brickell Avenue, which was constructed to be a replica of the church which Flagler donated in 1900. There is also a larger chapel at the Brickell location, which is why the replica was referred to as the little chapel in articles describing the move of artifacts from the downtown to the Brickell location. First Presbyterian honored its original benefactor by naming the replica edifice the “Flagler Chapel”.

Some of the items that were transplanted from downtown church to the Flagler chapel included the oak alter with its carved phoenix, a bird symbolic of immortality, the stained-glass windows and their wide oak paneling, the pews, and the organ. The back balcony was the first item to be moved to the Brickell location.

Demolition of the downtown chapel began on Tuesday, October 18, and was completed by Friday, October 21, 1949. Shortly after the rubble from the demolition was cleared, the general superintendent of the Roper Building project began preparing the property for the foundation of the new commercial structure. 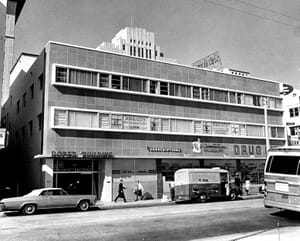 The building was designed by architect Henry Hohauser and Associates to contain 50,000 square feet of retail and commercial space. The exterior was originally terracotta, with mosaic tile forming a design over Dumac Drug Store, which was the largest tenant in the building at the time of its opening. Neon lighting was used extensively on the exterior, with each store having a unique format of lettering in their signage.

The building is three-stories in height, occupying 170 feet on Flagler Street and 100 feet on SE Third Avenue. The corner store location provides a spacious 40 feet of width and depth to the back of the building, while the seven other stores were 15 to 17 feet wide. In addition to the ground floor retail tenants, the top two stories provide office space and a penthouse on the top floor.

Officers of the Roper Corporation were three men from New York: Harry Kenin, president; Louis Kenin, vice president, and Dr. Charles Posner, secretary-treasurer. While the owners hailed from New York, they had real-estate holdings in Miami and Miami Beach dating back to 1944, when the company was formed.

City Construction, headed by Col. Nathan B. Rood and Mitchell P. Miller, were hired to begin the $650,000 project on November 10, 1949. Their intent was to finish the job by May 10, 1950, to meet a grand opening date of June 1st, however material shortages delayed the completion of the building until the Fall. Including those hired as subcontractors, City Construction employed 300 men to complete the building.

While most of the retail tenants opened sooner, October 19, 1950, was the official opening date of the Roper Building. According to G Phillip Bell, manager of the edifice, all the ground floor retail spaces were leased and only seven of the offices were vacant at the time of the opening. Bell was confident that all the stores and offices would be fully leased by the first of the year (January 1, 1951). 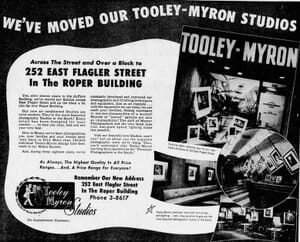 Figure 4: Ad for Tooley-Myron Studios in Miami Herald in 1951

The signature tenant for the Roper Building was Dumac Drug Store which occupied 7,000 square feet of retail space on the ground floor of the edifice. The store name was a combination of the last names of the founders of the company, Harry Daumit and Mike and William McLaney. The store was founded in New Orleans, Louisiana, and featured a ‘Beef Bar’, where customers can choose their favorite cut of beef and then have it cooked to order and served in a sandwich made of New Orleans French bread. The proprietors referred to it as “the prettiest drug store in the south.”

Some of the office tenants included Reliance Life Insurance Company of Pittsburgh, the Miami location for the Office of Price Stabilization, and the Tooley-Myron photography studio, which moved from the Alfred I. Dupont Building further east on Flagler Street. Years later, the building hosted the administrative offices for an NBA team which considered moving to Miami in the late 1960s. 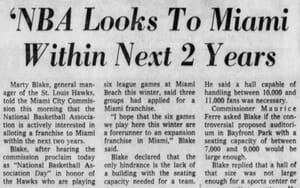 In the winter of 1967, the NBA’s Hawks franchise, which moved to Saint Louis from Milwaukee in 1955 and won an NBA championship in 1958, considered moving to Miami. The owner of the Hawks, Ben Kerner, was unhappy with the stadium facility and began a search for a new destination for the team.

In August of 1967, it was announced in the Miami Herald that the Hawks would play six regular season games at the Miami Beach Convention Center during the 1967 – 68 basketball season. The team signed a lease for office space in the Roper building to act as their local ticket office. Although the convention center was not seen as the ideal venue for the Hawks in the long term, it would provide the team with a small sample set of games to gauge the viability and support for the NBA in Miami.

In a Miami Herald article in December of 1967, Marty Blake, general manager of the Hawks, stated that the National Basketball Association was interested in allotting a new franchise to Miami within the next two years. The biggest hinderance was the lack of a stadium that could accommodate a full-time NBA franchise. Blake stated that Miami would need to provide a venue that could seat at least ten thousand fans. He was quoted in the article: “you do not have the dollar potential with a hall of less than ten thousand.” Season ticket prices for the six-game package ranged from $18 – $30 per game.

Prior to the Hawks agreeing to play a partial season in Miami, there was already a controversial proposal to erect an auditorium in Bayfront Park, but early plans would only provide enough seating for between seven and nine thousand fans for a basketball configuration. Ultimately, the auditorium never got built, and the Hawks were sold in May of 1968 to an ownership group based in Atlanta, where the franchise was relocated and has been playing since.

It would be two decades later when Miami was awarded an NBA franchise in 1988. To provide context on how the economics of professional sports have changed since the late 1960s, the Miami Heat play at the FTX Arena which can seat 21,000 fans and has 2,105 club seats, 80 luxury suites, and 76 private boxes.

As it turned out, the 1967-68 season was the only year that the Hawks played in Miami as the home team. The franchise’s ticket operation occupied an office in the Roper Building for only one year. 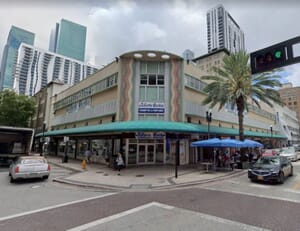 Throughout the changes of ownership of the building and lease of property, the northern parcel of land, where the Roper Building sits, is still owned by the First Presbyterian Church. However, the church sold the remaining value of the lease and ownership of the land for the southern parcel, where the three-story Plaza Building resides at 245 SE First Street, in November of 1979 for $725,000. The congregation used the revenue to pay off $100,000 of debt with the rest going toward church programs aimed at rebuilding the membership.

Meanwhile, the Roper Building still stands on the corner of SE Third Avenue and Flagler Street with a slightly different façade than it had when it opened in October of 1950. The building just celebrated its seventy-first year of existence on October 19, 2021, which means it has occupied the First Presbyterian corner for more than twenty years longer than the church’s time on that fabled parcel of land donated by Henry Flagler in 1898.