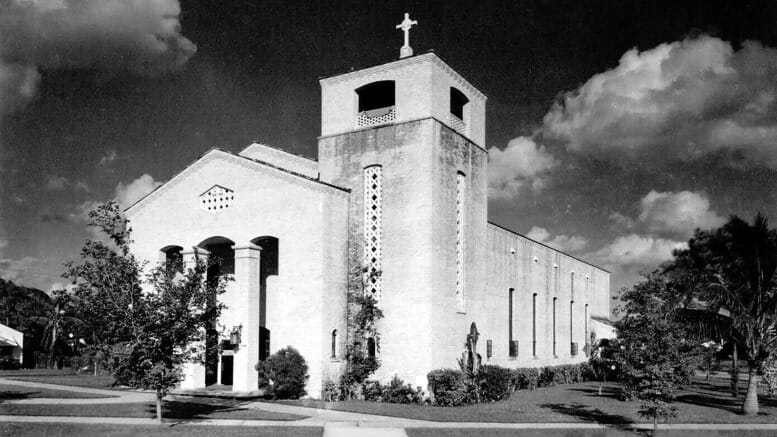 With its Romanesque flourishes, grey brick walls, and Celtic cross rising above a picturesque bell tower, Saints Peter & Paul Roman Catholic Church appears to be a structure out of time and place.  The eclectic neighborhood hosting it lies just a mile southwest of downtown Miami.  Adding to its uniqueness is its location, which occupies an odd-shaped lot that prompted its architect to arrange the building on a diagonal footprint pointing in a northwesterly direction toward the venerable Conch Hill neighborhood.

Immediately west of the church on another irregularly shaped block stands the rectory and the athletic field.  The third block comprising the complex, moving west, contains the school, cafeteria, auditorium, and a convent for the nuns who once staffed Saints Peter & Paul School. The school also stands on an odd shaped block, as it looks out from its location on a southeasterly diagonal toward SW Ninth Avenue, as well as toward and beyond the upscale Roads neighborhood. The west side of the block is more conventionally configured, as it faces bustling SW Twelfth Avenue.

History of the Property 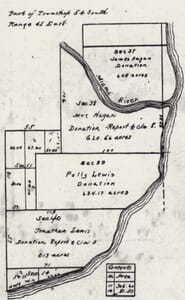 The reason the parish exhibits this unusual design is traced to the era when this property and everything around it was owned by the Brickell family, and represents a residue of the Roads neighborhood immediately south of it. Most of the Roads were carved out of a piney woods area by those who purchased the land from the Brickells and were influenced by the developmental plans for it by Mary Brickell, the family matriarch.

Prior to the Brickell family arriving in the wilds of the future Miami in 1871, Polly and Jonathon Lewis were granted “donations”, or land grants, from the Spanish government dating back to the Second Spanish Period (1783-1821). At a time when Southeast Florida was still a wilderness, the Brickell family had the foresight to acquire vast amounts of virgin land, and, with great prescience, held onto their land investment until after Henry Flagler’s Florida East Coast Railway entered the area in 1896, which opened the land adjacent and around the Miami River for development.

Growth of Catholicism in Miami 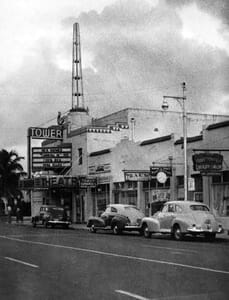 Miami’s rapid growth in the Depression Decade of the 1930s prompted the Catholic Diocese of Saint Augustine, which exercised jurisdiction over Catholics throughout the peninsula of Florida, to expand the number of parishes serving that population. Thusly, in 1939, the new parish of Saints Peter & Paul, designed to serve the spiritual needs of Roman Catholics living southwest of downtown Miami, was created.

Since the new parish had no church for worship, parishioners flocked to the Tower Theater in the 1500 block of SW Eighth Street for Sunday and Holy Days services.  The theater offered an attractive amenity for worshippers because it was air conditioned, a fact that did not escape members of the large downtown Catholic parish of Gesu, who derisively referred to their nearby brethren as “air conditioned Catholics.” Initially, the fledgling parish searched for property to build a church near today’s Shenandoah Middle School, and the Shenandoah Public Library. In fact, a small subdivision by the name “Saints Peter & Paul” rests in that area. Throughout the summer of 1939, the new parish progressed toward its goal of building a church in the Shenandoah neighborhood. 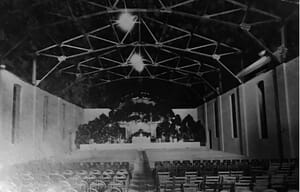 In September 1939, however, Olive Brickell, the widow of William Brickell II, approached the Diocese of St. Augustine and offered to donate a large amount of acreage hosting today’s Saints Peter & Paul complex in return for the diocese building a church with one of its entrances lying even with the ground to allow her, and presumably others with ambulatory handicaps, an easier way to enter its sanctuary. The deed to the property indicates this objective and lists the sales price for the land at $10 “and other good and valuable considerations.” The Diocese of St. Augustine quickly accepted this offer causing a location shift one-mile northeast of the earlier site for the new church.

Coincidental with the embrace of a new site was the reassignment of Father Robert P. Brennan, an Irish-born Diocesan priest from Fort Myers, to the new Saints Peter & Paul parish.  Handsome with red hair and a pleasing mien, Father Brennan gained a reputation as a builder, a reputation he quickly earned in his new assignment. Within three months of taking control of the new parish, Father Brennan celebrated the first service, a Midnight Mass on Christmas Eve, in the new church.  Fortunately, it was a clear night, a classic “Moon Over Miami” night, since only the girders for a roof were in place. Inside, the church was flooded by worshippers with the faithful spilling out into SW Twenty Sixth Road, forming a line beyond the entrance and plaza in front of the new church.  The number of worshippers exceeded one thousand.  Two months later, the roof over the church was completed.

Soon after, Father Brennan oversaw the construction of a rectory, which served as living quarters for the priests.  A school opened with grades 1 thru 8 in September 1941, along with a convent for the Sisters of Saint Joseph, who staffed the school as teachers.  In 1944, a cafeteria and auditorium opened, constructed while World War II was still raging. By then, the school’s athletics team were known as the “Panthers.” 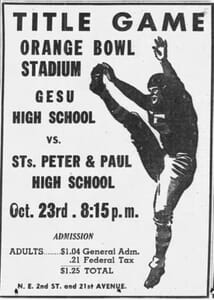 Each year following its opening, the school added a class grade to its high school, graduating its first class in 1946. The achievements of the inaugural graduating class included a Catholic state championship football team. Local and/or conference championship football teams would follow in 1949, 1950, 1951, 1953, and 1954, prompting local wags to dub the team “the Notre Dame of South Florida Catholic football.”  The school colors of blue and gold were the result of the football team acquiring its first jerseys as “hand me downs” from Miami High School, a football power whose teams were adorned in those colors. (So too was the Notre Dame football team.) 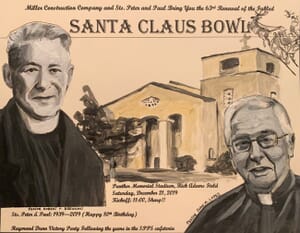 Saints Peter & Paul also offers vibrant alumni organizations drawing on former students scattered throughout Florida and beyond, who enjoy frequent reunions. Each year for the past 65 years, alumni football games have taken place on the hallowed field of Saints Peter & Paul each Thanksgiving and Christmas week.  Not surprisingly, these large reunion events are known as the Turkey and Santa Claus Bowls. Those Alumni involved here range in age from their early teens into their late 80s, although participation by those on the top end of the age scale is discouraged!

The school offered instruction from grades first through high school graduation until the graduating class of ’56, after which the high school grades were eliminated according to a Diocese plan to build Catholic high schools, thereby opening these earlier parish schools for additional primary school students. From 1956 thru 1960, Saints Peter & Paul included nine grades, after which the ninth grade was removed, as high schools began offering a freshman year. Its final two ninth grade graduating classes fielded championship track and field teams.

By the beginning of the 1960s, an influx of Cuban youths filled the school, prompting two sessions daily to accommodate the growing number of students.  The parish also began a special outreach to Cuban refugees, ultimately assisting thousands to adapt to their new home and culture.  The school’s enrollment skyrocketed to more than 800 students.  In subsequent decades and years, Saints P&P added pre-K 3 and 4, as well as kindergarten to grades 1 thru 8.  It remains a thriving institution with a broad reach in its host city.

Hats off to more than eighty years of history for a remarkable parish that has enhanced the spirituality of thousands of parishioners,  assisted thousands of others with their temporal needs, and contributed to the rich culture of Miami, the Magic City.