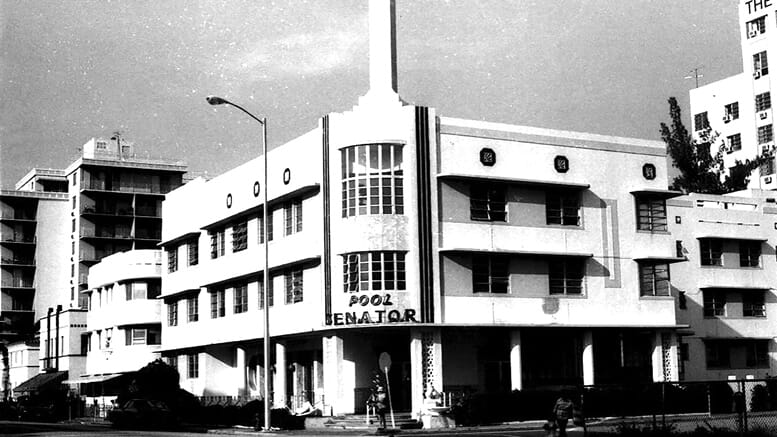 Lawrence Murray Dixon was one of the most prolific architects during the Art Deco period on Miami Beach in the 1930s. He and Henry Hohauser were considered the principal architects for the Deco style during this era. Some of the features that were prevalent during this architectural phase were streamlined curves, curvilinear glass, eyebrows, spires and neon. The buildings designed and constructed during this period were less expensive to construct than prior architectural styles, which was important during the depression years of the 1930s.

The last year of the depression decade may have been Dixon’s most productive year. He focused on buildings that would ultimately define a lot of the corners along Collins Avenue in the heart of Miami Beach. Each of his blueprints were forward looking and accentuated the age of the machine. Anchored on the northeast corner of Twelfth Street and Collins Avenue, The Senator Hotel was one of Dixon’s designs built in 1939. 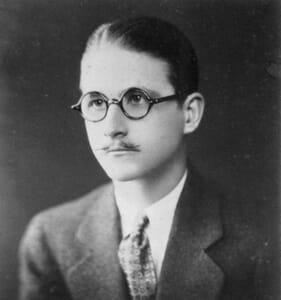 When Maurice Newmark purchased the lot on the northeast corner of Twelfth Street and Collins Avenue for $25,000 from Ernest Martin in April of 1939, the Miami News reported that Newmark was planning to build a hotel on this location with a budget of about $90,000. Given how quickly the project commenced, it is likely that Newmark had already been working with L. Murray Dixon on a design before he closed on the property.

While Henry Hohauser and Dixon were not known to often collaborate on the same project, they did adhere to a set of principles that provided complementary blueprints for buildings located next to each other or along a stretch of a prominent thoroughfare. A great example of this pattern was the set of hotels designed and built in 1938 and 1939 along the east side of Collins Avenue. This ad-hoc collaboration created what architecture historians have referred to as an “echo effect” from one block to the next given the symmetry of each of the hotels.

Hohauser’s blueprint for the Essex House in 1938 was based on features revealed in a preview of trends that would be highlighted a year later for the 1939 World Fair Exposition that took place in New York City. Although many of the elements revealed in this preview were first implemented by Hohauser for the Essex House, they were replicated by Dixon in his designs for the Tudor, Tiffany and Senator Hotels in 1939. The spire, located on the corner of Collins and its respective intersecting street, was one of several features that established a theme for Art Deco Hotels built along the avenue in the late-1930s. It provided a unique way to mark the prominent corners along Collins Avenue. 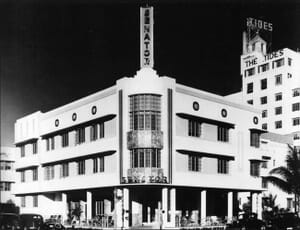 Dixon approached his plan for Collins Avenue with a pattern in mind. The spire on the corner, illuminated using neon-tubes for decorative highlighting, was one of the key elements to Dixon’s pattern. He took example from Hohauser’s Essex House but extended features beyond the example to ensure consistency between designs while also incorporating unique elements within each of blueprint.

The Senator was true to its nautical theme. The building was structured in an L-shape with a continuous façade along Collins Avenue and an inviting courtyard along its side street. The corner entrance was designed as a rounded façade with a pylon, or spire, on top. The side street provided maximum room views into the courtyard and pool, which had a mermaid sculpture along on the wall. There were life size cast-stone pelicans that guarded the front entrance. They were designed to expel water from their beak into a fountain as a way of providing an artistic element to the hotel’s lobby.

The building was constructed to resemble a ship. It had forty-three rooms designed to be consistent with its nautical theme: a raised deck that resembled the side of a ship, complete with portholes and handrails to accentuate the theme. The building was known for its curvilinear windows overlooking the pool area and etched glass windows located on the lobby level. 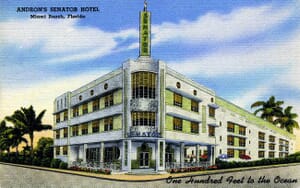 By the fall of 1939, the Senator Hotel was nearing completion. Newmark signed a contract with a management company to lease the operation of the hotel in November. The Miami Herald reported that the Andron brothers, operators of the Androns Mountain House in Haines Falls, New York, leased the property for $20,000 per year. However, the Miami News reported that the lease was for only $10,000 per year.

Regardless of the amount, the Senator was operational and opened in late November. The brothers happily reported that seventy five percent of the rooms in the hotel were booked for the first full month in business (December of 1939), during its first winter season. The company’s success in managing the Senator convinced the brothers to lease several other hotels on Miami Beach including the Alamac in 1940, Pierre’s in 1945, and the Ocean Grand in 1946.

In February of 1942, the Miami News reported on a crime that was cleverly averted by the night clerk of the Senator Hotel. A man walked in with a revolver in hand and a handkerchief over his face and announced: “This is a stick up”. In a very calm voice, E.E. Albert, the clerk on duty that evening, calmly and in a very friendly tone replied: “Why, that’s alright. Come right on in.”

The armed robber was so confused by the greeting, that he simply just walked out the back door without asking anything of the clerk. Albert’s demeanor must have given the thief the impression that that his heist was about to go sideways and he just decided to leave. When interviewed by the police, the clerk told the officers that he suspected the weapon was just a toy.

Army Takes Over Hotel During War 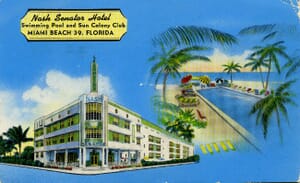 In May of 1942, the owner of the property and building, Maurice Newmark, sub-leased the Senator Hotel to the government to be used as barracks for the military. The Army Air Corps took over Miami Beach for training and occupied most of the hotels in town. Some of the buildings served as barracks, some as officer quarters and a few as mess halls and hospitals during World War II. The beach provided a great training ground for those preparing to be deployed to the Pacific theater during the war.

The detail and ornamentation that went into the design of the Art Deco hotels were not noticed or considered practical during wartime when the buildings were used as military housing. However, the sea-side mural in the Senator Hotel provided inspiration for soldiers who were homesick during the holidays. The fresco provided a “galilee-like” backdrop for the Christmas tree of the men who barracked in the hotel during this holiday season. The tropical Christmas theme provided a lift in spirits during an ominous time for many preparing to be deployed into battle. Captain Eustace Strout, squadron commander, said “… that there is no doubt that it is one of the best dressed trees on the beach.” It was the little details that made a difficult time much more manageable.

After the Army Air Corps released the hotel back to Newmark in the Summer of 1946, he sold the property to Alfred Nash. Until his passing in 1972, Nash owned not only the Senator, but also the William Penn and Nash Hotels on Miami Beach as well. He modified the name of his property on Twelfth and Collins to the “Nash-Senator Hotel”, which was then how the inn was described in advertisements until 1983. 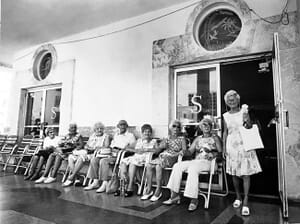 Following the war, the Senator Hotel dutifully returned to providing affordable accommodations for tourists who visited Miami Beach for their vacations. Like many of the other Art Deco Hotels, the Senator was fondly remembered by those soldiers who got “sand in their shoes” while training on the beach. Some of those veterans decided to make South Florida their permanent home and stayed at the Senator during their transition back to the place they trained. The greater Miami area was one of the fastest growing metropolitan areas in the United States during the decade of 1940-1950.

However, as the 1950s gave way to the 1960s, tourists began to choose other destinations for their vacations, and the clientele for the Art Deco hotels gradually changed. They went from nightly visitors in the early 1960s to retirees by the middle part of the decade. The hotels were inexpensive, and the weather was ideal for a person looking to enjoy their retirement years near a beautiful beach. It was around this time that Miami Beach was given the nickname “heaven’s waiting room”.

By the mid-1970s, given its location and proximity to the Atlantic Ocean, Miami Beach was prime for redevelopment, and the Art Deco hotels were in danger of demolition and replacement. Fortunately, for many of the buildings in the area, the formation of the Miami Design Preservation League (MDPL), gave these buildings an advocate prior to that danger becoming a reality.

The MDPL fought hard for both national and local historic designation. The creation of the Art Deco Historic District in 1979 was a monumental step in formalizing the historic significance of the buildings residing in the district, but it did not prevent a property owner from razing one of these cherished buildings.