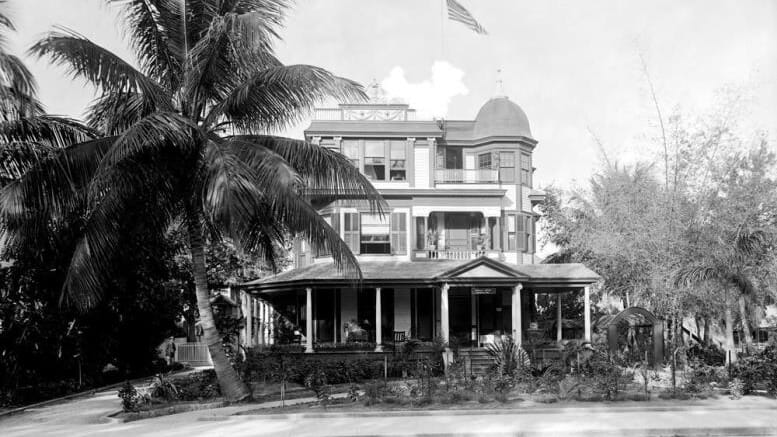 In the first decade of the last century, many of Miami’s downtown business leaders felt the need to establish an organization to promote the virtues of living and doing business in Miami. Although less than fifteen years old in 1909, Miami’s pioneer business community was optimistic that the city could experience unparalleled growth if it were just marketed properly.

While Miami established a board of trade in its first year of incorporation, many felt it wasn’t doing enough to proactively market the region. The business community optimistically believed that Miami was the best place in the country to live and do business. All of these leaders were pioneers who had seen the evolution and growth of the Magic City in its early years. It was in 1909 that these business leaders acted and formed an organization to serve as a de facto chamber of commerce.

Formation of the Club 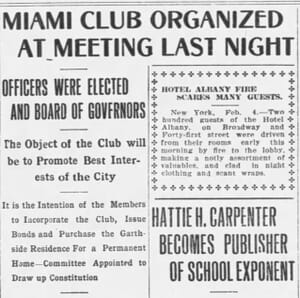 When James P McQuade and his wife, actress Gertie Reynolds, arrived in Miami in 1909, they planned to make an impact on the civic and cultural institutions of their newly adopted city. McQuade made his money in oil pipelines and was one of the wealthiest men to make Miami his permanent home in the first decade of the nineteen-hundreds. Shortly after arriving, the couple purchased the Lyceum Theater and renamed it to the Gertie Reynolds. In addition, James was approached to join a small group of men who had an idea to help promote the city.

In February of 1909, McQuade and Frederic H. Rand called a meeting of a few of Miami’s prominent business leaders to discuss how the citizens of the young city could help better promote its business interests. The Board of Trade, established in Miami’s incorporation year, and the Merchant’s Association, which was organized a few years after incorporation, were both expected to serve the role of promoting the city. However, both organizations were seen as ineffective due to political infighting between their appointed members. The Board of Trade was primarily focused on securing a deep-water port for Miami and spent very little time marketing the city.

McQuade and Rand managed to interest several other important early Miami pioneers to meet on the evening of February 3, 1909, which led to the formation of a club which was described by the Miami Metropolis as follows: “was to promote the best interests of Miami, socially and as well as a business way.” The group of men who formed the organization were resolute that “politics will in no way enter into the business of the club.”

James McQuade was elected as the club’s first president, James H. Gilman as secretary and treasurer, and Frederic Rand, a practicing attorney, drafted the articles of incorporation. The first board consisted of Joseph A. McDonald, Frank B. Stoneman, E.A. Waddell and J.E. Lummus. The dues were set at twenty-five dollars per year, and the first order of business was to locate a suitable club house to conduct business and host social events.

The members of the Miami Club consisted of the who’s who of early Miami pioneer business leaders: 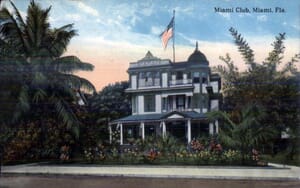 Two weeks after the formation of the Miami Club, James McQuade put up the money to purchase the former residence of Charles Garthside, a former vice president of Fort Dallas Bank, who lost the mansion to foreclosure when his bank went out of business due to the Panic of 1907. McQuade paid between twelve and fifteen thousand dollars to the Bank of Bay Biscayne, which took possession of the home following Garthside’s foreclosure proceeding. The original plan called for the club to lease the property from the bank, but the board of directors wanted the home sold, which led McQuade to purchase the building and lot on behalf of the club.

This residence was one of the early gabled and turreted mansions along Avenue B (today’s NE Second Avenue), overlooking the Royal Palm Hotel. It was located midway between Flagler and SE First Streets, on the west side of NE Second Avenue, with the original address of 1210 Avenue B. The mansion would have sat where the theater portion of the Olympia is located today.

As Thelma Peters described in her book, ‘Miami 1909’, “to make the residence suitable for a men’s club it was redecorated with masculine appeal: unflinching furniture and stuffed heads in three varieties: elk, bear, and wild boar.” The club house had been unoccupied for more than a year when McQuade bought it, so it needed some maintenance and some electrical work to accommodate the change in use from a residence to event and meeting space.

After the building was retrofit into the club’s new home, members opened its new space to celebrate Washington’s birthday on February 22, 1909, when they hosted a luncheon at the clubhouse. The organization hired the Royal Palm orchestra to entertain their guests and each member invited their wife and family members to enjoy an afternoon celebrating the holiday in their new quarters.

The interior of the clubhouse included of spacious hardwood paneled living room, dining room and reception hall. The floors were flawlessly polished and partially covered with exquisite area rugs. The mantels were banked with fresh flowers and gorgeous foliage.

The most impressive space in the clubhouse was the living room which featured a great stone fireplace and ornate fixtures for the doors, windows and mantels. A writer from the Miami Metropolis covering the first event at the club summed up the building as follows: “All in all, the home of the new Miami Club is perfect in every detail, and will doubtless be often the scene of entertainments quite as beautiful as that of yesterday.” 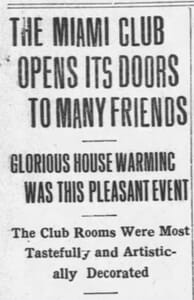 Following the Washington Day celebration in 1909, the members of the club turned their attention to how they could effectively promote the city and its interests. One of their first ideas was to publish a compilation pamphlet to highlight the city’s commercial opportunity. The inaugural membership class was in perfect position to sell the promise of the Magic City as their stories were evidence of the city’s potential.

The Miami Club also got involved in local civic projects, such as donating money for a new public fountain in front of city hall, and opened their club house to other local organizations, such as the Dade County Medical Association, for special events. The medical association held their annual banquet at the Miami Club from 1910 through 1912. They even added the sitting Florida Governor, Albert W. Gilchrist, as an honorary club member in 1910.

However, despite the promise of lofty intentions, the club suffered from a similar set of maladies as the board of trade and didn’t really advance their primary mission of promoting the city. Although it isn’t quite clear why, the club experienced a significant churn of its officers and members during its three plus years of existence. In January of 1911, the club elected all new officers, with James McQuade stepping down from the president role and into a ceremonial vice president position.

Even ownership of the club house changed hands frequently. On March 26, 1910, McQuade sold the facility to Max Zapf for twelve thousand five hundred dollars, which was close to what he paid for the building and property two years earlier. A year and a half later, on October 18, 1911, Zapf sold the property to Peter Ullendorf and W.C. Groves for twenty-one thousand dollars.

In addition to officer and membership churn, the club was administered by three different managers in its first four years. The club was run by Max Zapf in its inaugural year, followed by Joe Wolfe for the next two years, from 1910 until 1912, and then by John Olive in its final year in 1913.

While the organization didn’t accomplish much in the way of promoting Miami, it did serve its members as a social club. The club house was available to members on a consistent schedule and it was best known for its New Year’s Eve parties. Entertainment for these parties was provided by Kauffman’s Orchestra, and the meals were always magnificent. However, the celebration of 1912 was the last new year’s soiree enjoyed at The Miami Club.

Dissolution of the Organization

When John F. Olive took over the management of the Miami Club, he called a mandatory all member’s meeting on January 31, 1913. Olive recognized that in just a few short years, the organization was flailing and needed to revise its charter and modernize its facility. In an article in the Miami Metropolis on February 19, 1913, Olive stated that “it will be his purpose to re-organize the institution making it an up-to-date businessmen’s club with a number of new features.”

However, on March 8, 1913, an article in the Miami Metropolis described the residence at 1210 Avenue B as “the building formerly occupied by the Miami Club”. The article went on to state that there would be a meeting to organize a new club that may occupy the club house, but within six months of this article the residence became the home of the Miami Savings Bank.

While the dissolution of the club in 1913 was done with the intention of reorganization, The Miami Club never did reestablish itself. In 1915, the Board of Trade and the Merchant Association merged into the Miami Chamber of Commerce, providing the city with a government sponsored organization that was responsible for promoting the city, making the need for a private social club with the same charter as unnecessary.

Fate of the Building 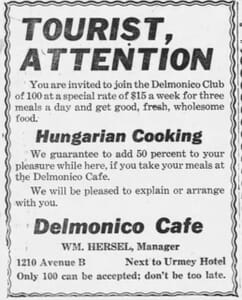 The Miami Savings Bank was located at the former quarters of the Miami Club for less than one year. The residential style commercial building located at 1210 Avenue B was then converted into a rooming house and restaurant following the departure of the bank in 1915. The first eatery to operate out of the former club house was Delmonico Restaurant which served home cooked Hungarian meals. A year after opening, the restaurant made a slight change to its name to Delmonico Café, but made a significant change to its specialty shifting from Hungarian cuisine to seafood.

In October of 1917, the restaurant was closed and refitted to provide an upscale dining experience featuring seafood, steak and chops. The name was changed to The Illinois Restaurant, and it offered dancing on Saturday nights in addition to a fine dining experience every night of the week. Agnes Beaumont, who formally ran the dining room of Marshall Fields in Chicago, was hired to manage the restaurant. However, in the fall of 1918, there was a squabble over rent and the proprietors of the restaurant agreed to move out of the house ending its short tenure at 1210 Avenue B.

Following the departure of the Illinois Restaurant, the former owners of Delmonico Restaurant reopened at 1210 Avenue B, and once again operated as a Hungarian eatery from 1918 until 1921. Once the restaurant closed, the residence was subdivided into a multi-use office building where it was occupied by realtors, lawyers, a tea-room and the Miami Motor Club. The residence was razed in the mid-1920s to make room for the Olympia Theater, which still stands today on NE Second Avenue and Flagler Street.

2 Comments on "Short History of The Miami Club"