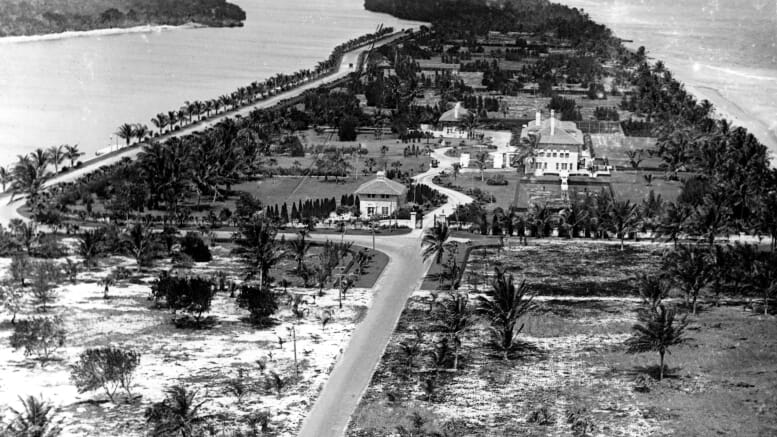 The setting was along 44th Street and Collins Avenue in 1923, looking north at the Snowden residence which was a landmark for the beginning of an opulent new residential area in the fledgling City of Miami Beach. The residence was the culmination of Carl Fisher’s effort to attract his wealthy friend to his latest project. Snowden made his millions in the petroleum sector but became so optimistic about the prospects of Miami Beach that he made it his second home and shifted his focus and wealth to help Fisher develop this slice of paradise. Snowden’s property at 4400 Collins Avenue was the anchor to what would become the beach’s Millionaire Row.

The chain of homes that comprised the beach’s gold coast stretched from Collins Avenue and 44th Street to 60th Street. Partly based on the cachet created by the promotion tactics of Carl Fisher and friends, Millionaire Row became the winter destination for well-known businessmen and celebrities as they built extravagant mansions along the strip. Some of the notable capitalists included Frank E. Gannet, founder of the Gannett newspaper empire, Major Albert Warner, one of the founders of Warner Brothers Motion Pictures, Reuben N. Trane, founder of the heating and air conditioning company bearing his name, and boat racer Gar Wood just to name a few.

Miami Beach’s row of lavish oceanfront mansions rivaled similar upscale residential areas in Brickell and Coconut Grove during the 1920s and 30s. However, by the middle decades of the Twentieth Century, the quarter evolved from a residential to a hotel district, leaving us with only the pictures and stories of the beach’s gold coast of yesteryear. 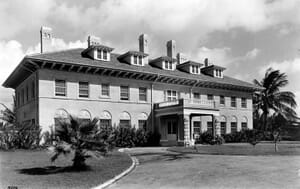 Born in Oil City, Pennsylvania, in 1873, James Snowden was destined to make his fortune in the oil and gas industry. He co-founded the firm Snowden and McSweeney which engaged in oil exploration out of Texas and Louisiana beginning in the early 1900s. During his business travels, Snowden and his family settled in Indianapolis, Indiana, where he met Carl Fisher who got him interested in Miami Beach.

Based on Fisher’s recommendation, Snowden visited Miami Beach and was impressed enough to purchase a 15-acre tract of land from Thomas Pancoast in April of 1915, which was formerly part of the Collins farm. James hired an architect from Indianapolis and planned on building an elaborate residence on the property, but before he could begin construction, Snowden needed to dredge and pump 130,000 cubic yards of sand along Indian Creek to provide fill for a bypass road as well as solidify his land. He built a bulkhead along the edge of the stream and fortified a road running parallel to the creek to provide a thoroughfare around his property. Snowden’s lot was located just north of 44th Street and Collins Avenue, where the road turns west toward Indian Creek. 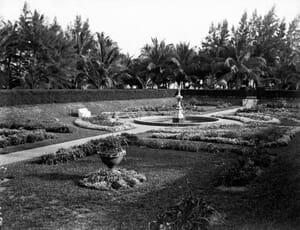 The ground preparation process was overseen by John Levi, who would later become the tenth mayor of Miami Beach and took such a long time that James did not seek a general contractor to construct his residence until July of 1916, when he hired the George Sykes Company. The project to build the residence was budgeted for $60,000 which included the cost of construction and landscaping the property. Once completed, a unique feature of the estate was the sunken garden located just south of the residence, which was supervised by James E. Sweet, who was formerly with the Griffing Brothers, the nursery that provided all the sod and foliage for the project.

The mansion was ready for occupancy by the spring of 1917, allowing the Snowden family to enjoy the end of that year’s winter season. After spending time in Miami Beach, James decided to extend his commitment to the area and made a sizeable investment into Carl Fisher’s Miami Ocean View Company, at which time Snowden was given the title of president of the firm. In addition to the acquiring the acreage for his home, Snowden also purchased lots to the north and south of his homesite as investment property. 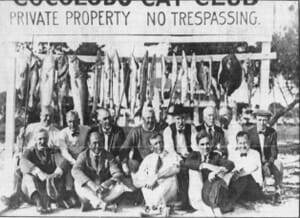 The Snowden’s used their Miami Beach mansion as their winter residence until the holiday season of 1922. At that time, Harvey Firestone, president of the Firestone Tire and Rubber Company, leased the property from the Snowden family in November of that year. Firestone was bullish on the future of Miami Beach and recruited many of his contemporaries to join him in South Florida for the winter season.

The tire magnate was able to convince friends and business partners, including Thomas Edison and Henry Ford, to visit him during the 1922 winter season. However, it was news that Firestone was going to host President Warren Harding in March of 1923 that created a lot of excitement for South Florida residents. In addition to the first couple enjoying the spoils of Miami Beach during their visit, President Harding managed to escape from the beach to take an impromptu trip to the exclusive Cocolobo Cay Sportsman Club located on Adams Key. The visit to the club gave the president a respite from the responsibilities of running the country.

The writer of the Miami Daily News article described the property as follows:

“The estate consists of the beautiful residence, a lodge-house, large garage with living quarters, a play-house for children, swimming pool, sunken garden, etc. The house has 10 bedrooms on the second floor while the ground floor contains the beautiful reception, living room and billiard rooms, library, dining room, and servant’s department. The grounds are surrounded by a stone wall with ornamental iron gates.”

In addition to the sale of his residence, Snowden also sold his investment property to the north and south of the residence. He sold an additional lot to Firestone on the north side of the estate and a lot adjacent to the Firestone property to Edsel Ford. 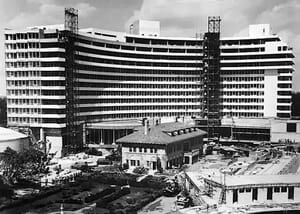 After Harvey Firestone acquired the Snowden mansion, the area north of the residence saw an acceleration of the development of millionaire row. Just as the Firestone mansion led to beginning of the proliferation of mansions along the row, the property’s redevelopment to the Fontainebleau Hotel in the mid-1950s represented the beginning of the end of Miami Beach’s residential gold coast.

Harvey and Idabelle Firestone owned the mansion at 4400 Collins Avenue for nearly three decades following the year after purchasing the residence from Snowden. Harvey passed away on February 7, 1938, and ultimately his estate requested a rezone of the property for hotel use. The Firestone Estate was granted the change in zoning in 1950 and then sold the property for $2.3 million to a syndicate headed by Ben Novak in 1952.

Novak began construction of the Fontainebleau Hotel in 1954 around the Firestone mansion, using the residence as an office for himself, the general contractor and the hotel’s architect. It has been contended that Morris Lapidus, the designer of hotel, gained inspiration for the bow tie tile floor in the lobby of the Fontainebleau from a similar pattern found in the loggia of the Firestone Mansion, where he worked during the construction of the hotel.

Once the Fontainebleau Hotel began to take shape, Marks Brothers Demolition company razed the Firestone Mansion to allow for the completion of the hotel and its pool. The other mansions to the north of the former Firestone property began to be rezoned and redeveloped for new hotels through the 1950s and 60s. What began as an upscale residential quarter with the Snowden mansion in 1915 transitioned to a commercial hotel and apartment district by the end of the 1960s.