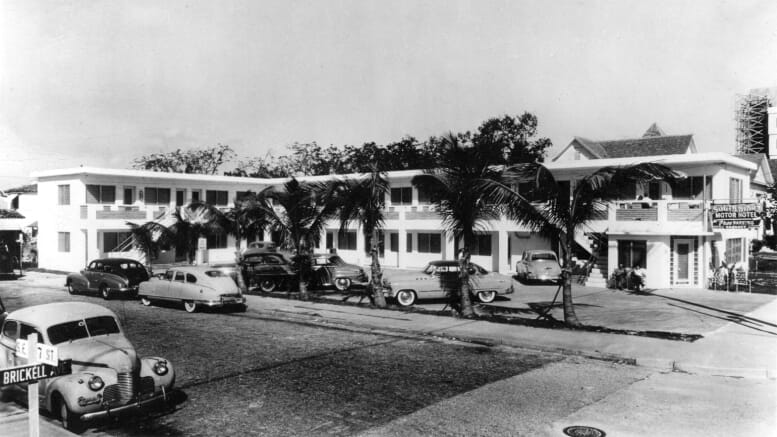 The years following the end of World War II brought a lot of change to the Brickell neighborhood. One of the trends that began in the mid-1940s, and continued into the 1950s, was the construction of motor lodge style hotels along Brickell Avenue. Residential single and multi-family residences were beginning to disappear in favor of the latest trend in hotel configuration that catered to the automobile-centric traveler.

The corner of SE Seventh Street and Brickell Avenue was a natural location for one of these motor lodges. It was positioned one block north of the end of the Tamiami Trail and resided on a main thoroughfare just south of downtown Miami. Tourists traveling by car could easily pull into the parking lot, register for inexpensive accommodations and have a short walk to their room. It was on this corner, at 636 Brickell Avenue, that the South Winds Motor Hotel operated for nearly forty years.

When Charles and Cora Wolfram purchased a home on Brickell Avenue, they did what a lot of other homeowners in the neighborhood had done for years when they converted it into a rooming house. The makeshift hostelry was called the Sunset Guest House and it served as an inexpensive place for a tourist or tenant to have a roof over their head. The guest house may have better been described as a bed and breakfast if it were still operating today.

One of the tenants of the rooming house when it opened in 1944 was Erwin L. Combs. Erwin was an avid stamp collector and he had a unique idea on how he would help the war effort when he formed the Miami chapter for a charity called “Stamps for the Wounded – Philately’s Volunteer Service Committee.” Following its formation, the chapter operated out of Comb’s room at the Sunset Guest House located at 636 Brickell Avenue, but it would later move to a different location. Miami and Miami Beach were flush with soldiers and sailors during World War II, including those who returned from battle with injuries and were brought to South Florida to recover from their injuries.

The purpose of the charity was to give the wounded soldiers a hobby while they received treatment at local hospitals. The charity collected materials to help soldiers begin a stamp collection. Combs described the purpose of the initiative in an article in the Miami News on December 10, 1944:

The idea behind the new plan, Combs explained, is to furnish stamps, hinges for mounting, catalogues to keep the stamps in and other supplies necessary for the servicemen – and women – to make a good stamp collection.

Considering that stamp collecting was a big hobby in the 1940s, the initiative was considered a big success. It kept war veterans occupied during their recovery. For those veterans who passed their hobby onto descendants, it is likely their collection, that began in Miami during wartime, is worth a small fortune today. 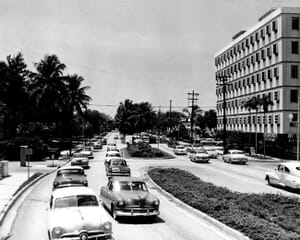 At the onset of the 1950s, there was a change in how tourists were traveling to and around South Florida. The automobile provided the freedom and accessibility of traveling the country, and the hotels began to adapt to the automobile-centric tourist in the form of motor lodges.

There are still several mid-century motor lodges that exist along Biscayne Boulevard today. The architecture for motor lodges were mostly designed in Miami-Modern (MIMO), architecture. Although the South Winds Motor Lodge was built in the early 1950s, it wasn’t necessarily designed in the MIMO style like many other motor lodges of this era. However, it did provide the utility of the new concept of a motor lodge: pull up, check-in and enter your room with minimal effort.

In 1950, the Wolframs replaced the rooming house with the South Winds Motor Lodge as seen in the cover photo. The picture was taken in March of 1951, before the proprietors made a slight modification to the name. The hotel had twenty-six rental units.

By the mid-1950s, the name was changed to the ‘Downtown South Winds Motor Lodge”. The new name was most likely updated to inform prospective guests that the motel was very close to downtown Miami and would be a good and inexpensive choice for those conducting business or planning to spend time in the city during their visit. 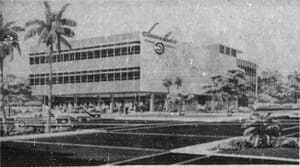 After twenty-six years of ownership, Cora Wolfram agreed to sell the property to American Bankers Insurance in June of 1970. The financial firm purchased the property for $10.28 per square foot and most likely had been making offers on the South Wind’s property since the mid-1950s.

American Bankers built their corporate office on the southwest corner of SE Sixth Street and Brickell Avenue in 1956, just north of the South Winds Hotel. In an article in the Miami News, on July 1, 1956, the insurance company published a rendering of their new office building. The rendering gives the impression that their plans were to have possession of the entire block, from SE Sixth to SE Seventh Street. However, when they opened their office in 1957, the Downtown South Winds Hotel still occupied the corner of SE Seventh Street and Brickell Avenue.

One can speculate that the Wolframs were not interested in selling the property in 1956. Therefore, American Bankers Insurance needed to wait another fourteen years to acquire the rest of the block. However, the financial firm ended up never using the hotel’s land to expand their corporate office. The company left Brickell before they could expand south to SE Seventh Street. 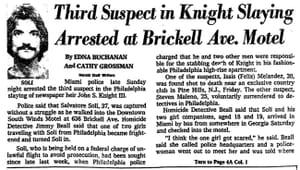 The Downtown South Winds Hotel played a role in the capture of a murder suspect in the slaying of a family member affiliated with Miami. One of the killers of John S. Knight III was caught at the motel in December of 1975. The victim, the grandson of John S. Knight, the editorial chairman of Knight-Ridder Newspapers Inc, was working for the Philadelphia Daily News when several men forced their way into his Rittenhouse Square apartment in Philadelphia in an apparent robbery attempt. However, what began as a home invasion, ended in the murder of the Daily News’ writer on December 8, 1975.

There were three suspects that the police were seeking in connection with Knight’s murder. One of them was found shot to death in New Jersey, a second turned himself in to Philadelphia police shortly after the crime was committed and the third suspect, Salvatore Soli, was on the run.

On Saturday, December 13, Soli and two young women arrived in Miami by bus and then checked into the Downtown South Winds Hotel under the name of “Sophia”. On Sunday morning, the younger of the two women, Linda Wells of Syracuse, New York, got nervous and walked from the hotel to Bayfront Park to locate a police officer. She ultimately was put in touch with Homicide Detective Jimmy Beal of the Miami Police Department who worked with her to secure the arrest of Soli.

Three detectives and two plain clothed officers went to the South Winds motel to capture Soli. The detectives waited in the room rented by the suspect and two women, and the officers waited outside. At 11pm, Salvatore returned to the hotel room unarmed and offered no resistance during his arrest. However, he did change his appearance by shaving his mustache and dying his hair blonde. At first, he denied his identity, but later recanted his denial.

Within a couple of days after his arrest, the alleged murder suspect was extradited back to Philadelphia to stand trial. On May 22, 1976, Salvatore Soli was convicted of first-degree murder, robbery, burglary and criminal conspiracy. He was given a sentence of life imprisonment.

Still Standing into the 1980s 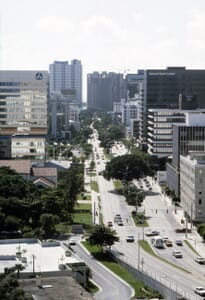 Despite that American Bankers Insurance purchased the land and building of the Downtown South Winds Hotel in 1970, they continued to keep it open and running as a motel through the 1980s. In an article in the Miami News in October of 1981, the manager of the motel, Barbara Connor, was interviewed and stated that the motel was “doing just fine”.

Connor went on to say that “most rooms are rented to tourists, Bahamians visiting Brickell doctors, and clients of avenue lawyers. Although we do get the occasional couples from an office during the afternoon.” The daily rate for a room in 1981 was $22, which was considered expensive in comparison to the motels located south of 10th Street on Brickell Avenue.

The hotel was still standing as late as 1984, based on a photograph found in the State of Florida archives. The photograph provides an aerial view of Brickell Avenue looking south, and one can clearly see the South Winds motel just south of the American Bankers Insurance offices on the northwest corner of SE Sixth and Brickell.

Although it isn’t exactly known when the hotel was razed, it was most likely gone when American Bankers Insurance sold the Brickell Avenue property in 1990 to Sherlon Investments Corporation. The property is now the home of the Brickell World Plaza, which was a project planned during the building boom of the mid-2000s. 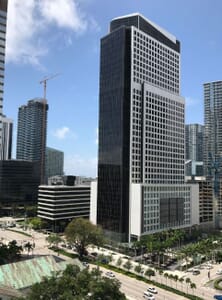 The World Plaza project was originally going to consist of two towers. What was unique about the original design was that buildings would have been aligned in a diagonal shape with the west tower located slightly north of the east tower. The promenade was shaped at a northeast angle to provide symmetry to the spacing of the two towers. The purpose of the unusual spacing of the towers was to maximize the view to the northeast providing both buildings with a direct view into Brickell Park and beyond.

However, the 2008 recession changed the scope of the project and only the east tower was constructed in 2011. The space that would have been the location of the second tower was used as parking for the Brickell World Plaza for several years and is now being developed as a separate project along SE Seventh Street, next to Brickell City Centre.