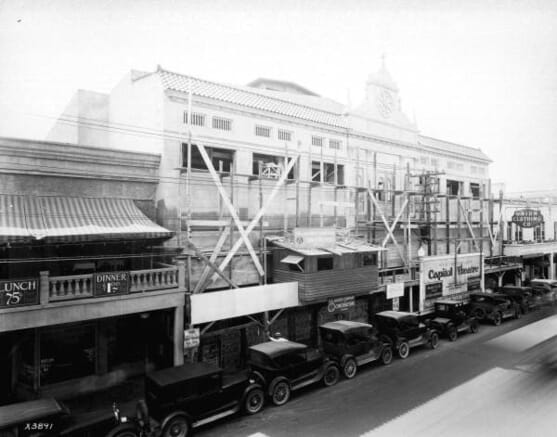 When Mitchell Wolfson and Sidney Meyer formed the Wolfson-Meyer Theatre Company in 1925, they set their sights on building a state of the art theater in downtown Miami. The location they selected was on one of Miami’s most important streets. Once completed, their first theater would be called The Capitol Theatre and it would be located at 310 North Miami Avenue.

Wolfson and Meyer intended to build a classy, “first-run” theater that would attract the best pictures of the day. The theater would feature an amenity that most Miami residents would not enjoy in their home until the middle part of the twentieth century.

Built During the Boom 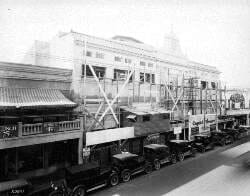 The Capitol Theatre was designed by architect E. T. Wells and was considered a Spanish influenced design. The contractor hired to build Well’s design was S. S. Jacobs Company of Omaha, Nebraska. Sidney Meyer grew up in Omaha, Nebraska, and graduated from University of Nebraska. This may have influenced Wolfson and Meyer’s selection of the general contractor.

While the momentum of the building boom of the mid-1920s provided a lot of optimism for the Miami area, it also presented a lot of frustration to those competing for resources to complete construction projects. Construction on the Capitol Theatre was started in 1925, but the project was moving much slower than the young partners had anticipated.

By the latter part of 1925, both building materials and construction workers were in short supply. The general contractor got to a point where they needed to import contractors to finish the project. By the middle of the summer of 1926, the theater was completed at a cost of $300,000. 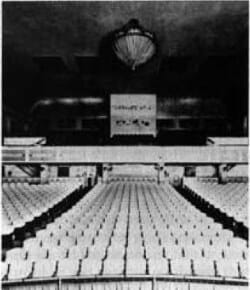 Interior of Capitol Theatre in 1926

Once completed, The Capitol Theatre’s interior featured an exquisite mosaic and a magnificent chandelier. The color scheme was predominantly orange, ivory, gold and green giving the interior the appearance of a beautiful tropical sunset. The inside of the theater featured a spacious main seating area along with a balcony and an orchestra seating area. The building was very reminiscent of gilded age opulence with a tropical twist.

Opening Night of the Capitol Theatre 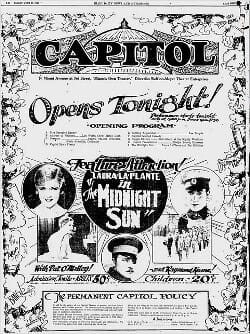 The theater officially opened on the evening of June 25th, 1926. There were 1,500 invited guests and the temperature outside was what one would expect on a June evening in Miami. The ventilation system was enjoyed by all attendees on opening night. The next day, the Miami Herald reported that several hundred others were turned away from the grand opening.

Grand openings of theaters were celebrated with much greater fanfare than they would be today. The events of opening night at the Capitol Theatre would feature multiple forms of entertainment. The audience was welcomed by Mr. James Donn, and was followed by a Seigbert Asher singing a rendition of the “Volga Boatman”.

Next, Miss Evelyn Brown, “Danseuse”, would perform and would be followed by a newsreel. The feature film that night was a Universal Picture Production, “The Midnight Sun”, a drama of Russia under the Czars.

According to Mitchell Wolfson many years later, the highlight of the night was the performance of the Capitol Theatre Orchestra. The orchestra was conducted by Mario Armellini, who had been the musical director at the Roney Plaza, Royal Poinciana and Breakers hotels. Wolfson remembers the orchestra was given a standing ovation for their performance. The Capitol Theatre Orchestra became a favorite of Miami residents from that night on.

An article on January 1st, 1939 in the Miami News provided insight on the connection of the partners responsible for building an entertainment empire in South Florida. While Sidney Meyer grew up and went to school in Nebraska, he quickly adopted Miami as his home. Meyer had an early history with the motion picture business. He ascended from shipping clerk to general manager in charge of distribution for Fox Films.

Mitchell Wolfson was born in Key West in 1900. He attended school in both Key West and at Erasmus Hall High School in Brooklyn, New York. After graduating from Columbia University, Wolfson returned to Miami to become treasurer of the East Coast Wholesale Corp, which was founded by his father in 1884.

Sidney Meyer would meet and marry Mitchell Wolfson’s sister. Wolfson and his brother-in-law decided to form a business in 1925. The official name of the company was the Wolfson Meyer Theatre Company. Shortly after the opening of The Capitol Theatre, the two would shorten the name of the company to Wometco. The acronym would feature the first two letters of Wolfson (WO) and Meyer (ME), along with the ‘T’ of theatre and ‘CO’ of company.

The Capitol Theater soon became the anchor tenant of the block on Miami Avenue, between NW Third and NW Fourth streets. Less than one month after the grand opening of the theater, the Capitol Department Store opened just south of the theater. Attempting to capture the excitement of the theater’s opening, they took out a big ad in the Miami Daily News and Metropolis announcing a big sale. The store boasted that they were just “20 steps south of the Capitol Theatre”, located at 304 N Miami Avenue. However, the department store didn’t stay in business long. In the 1930 Polk City Directory, 304 N Miami Avenue was listed as vacant.

By 1930, there was a Capitol Hotel located at 328 N Miami Avenue. Although the city directory spelled ‘Capital’ with an ‘a’, an advertisement in the Miami News in February of 1929 had it spelled in the same manner as the Capitol Theatre. The Capitol Hotel appeared on the front page of the Miami News on June 22nd, 1955 because one room in the hotel was used as the location for an undercover sting to arrest two Miami Detectives involved in a bookie scandal.

The Capitol Theatre experienced its own form of adversity in January of 1932. The Palm Beach Post reported that a bomb had exploded at the Capitol Theatre in Miami on January 4th. There were a few injuries to stage hands, but the audience filed out of the building with minimal panic. The bomb was made with gun powder and sulfur and was ignited with phosphorus.  The blaze was put out with fire extinguishers. The theory was that the bomb was placed by a rival motion picture operator’s union as part of a three year fight between union members. 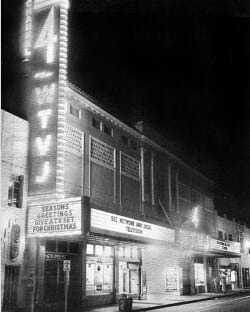 When Wometco created Miami’s first television station in 1949, it utilized the theater to launch its new venture. Theater patrons would take the staircase to the second level to watch movies, leaving office space on the first floor for a studio. Once the studio was operational, WTVJ was able to broadcast its first show on March 21, 1949 from the theater. It was from this small studio that Ralph Renick began his career with WTVJ as an intern in 1949. He was named news director in 1950.

By 1951, the Capitol Theatre was only 25 years old, but was showing its age. At the same time, television was becoming a medium that was increasingly adopted for home entertainment. Wometco decided to close The Capitol Theatre in 1952 and to convert the building into a television studio. The conversion provided a much larger WTVJ studio. The television station moved into and dedicated their new studio in November of 1952.

The conversion added 200 spectator seats to the three-story studio to accommodate an audience for its 68-by-100-foot studio on the second floor. The ground floor housed the executive offices, programming and sales departments. The control and projection rooms were on the third floor.

As part of the conversion, the floor of the studio was supported by concrete columns that were added 15 feet above the old theater floor and stage. The newly added second floor provided space for offices beneath the studio on the ground floor. The lift in the studio from the ground floor may have been fortunate during hurricanes, but even during the worst of Andrew in 1992, it was the high winds, and not flooding, that concerned Brian Norcross and others bunkered in the WTVJ studios as the storm pounded South Florida.

WTVJ operated out of the converted Capitol Theatre building from 1949 until 2000 when they built their brand new studio in Miramar, Florida. WTVJ’s move out of downtown Miami represented the end for the block of buildings along North Miami Avenue. 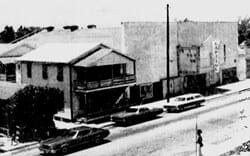 Capitol Theater in Overtown in 1970s

Wometco had been operating a theater in Overtown at 322 NW 14th Street called the Harlem Theater. In the early 1970s, Wometco renamed the Harlem Theater to the Capitol Theater. The time to own a neighborhood theater seemed to have passed. Receipts were down and theater goers were attending movies in suburban malls. In a Miami News article in June of 1973, a Wometco representative stated that the Capitol in Overtown wasn’t taking in enough revenue to even pay for the cleaning service. The theater was earning roughly $75 per day.

The Miami News article was entitled “Death for Capitol Theater – Black Neighborhood’s Last Picture Show”. It announced that Dade County had purchased the land and it was only a matter of time before the building would be demolished. The land that the theater once resided is now part of a park that includes the Overtown Youth Center. 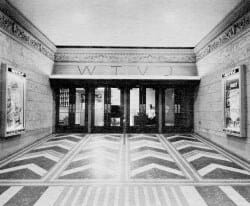 The former television station buildings vacated didn’t last much longer following WTVJ’s move to Miramar. In 2000, the entire west side of the 300 block of North Miami Avenue was demolished to make room for a Federal Courthouse Complex.

While there is no trace of Wometco’s presence on North Miami Avenue today, there is no question that The Capitol Theatre, WTVJ and Wometco will be always be a big part of downtown Miami’s past. The buildings can be demolished, but the memory of each institution will remind of us of a different time in downtown Miami.

14 Comments on "The Capitol Theatre, Wometco and WTVJ"