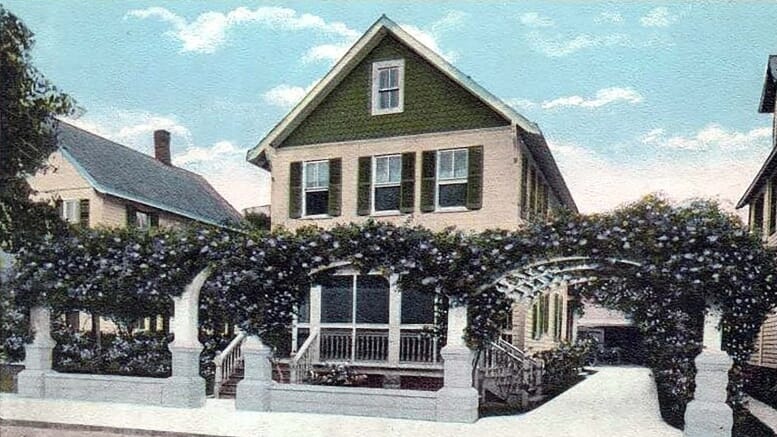 One of the earliest residential quarters in Miami was a cluster of cottages built by Henry Flagler in 1896 to house Florida East Coast Railway employees during the construction of the city. An earlier article entitled “Flagler’s Royal Palm Cottages in Downtown Miami” provides the story of this development. The cottages were lined on two residential streets, residing on the north and south side of each respective way, just west of Flagler’s Royal Palm Hotel, along Thirteenth and Fourteenth streets, which were later renamed to SE First and SE Second streets in 1920. The cottages were bracketed by today’s SE Second and SE First avenues.

John Reilly, the first mayor of Miami, Everest Sewell, an early merchant and three-time mayor, as well as James E. Lummus, the second mayor of Miami, were all residents in this quaint residential quarter. Perhaps the most beautiful home in the two-street neighborhood was once owned by someone who the Miami Metropolis once referred to as Henry Flagler’s “Mastermind”. This cottage would later be referred to as ‘Villa Augusta’. 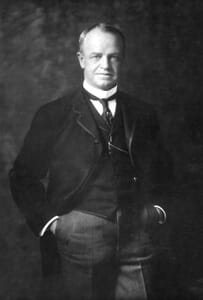 When Joseph Robinson Parrott died suddenly on October 13, 1913, many in Florida were shocked to hear the news. At the time of his death, Parrott was the president of the Florida East Coast Railway (FEC), and one of three trustees managing the estate of Henry Flagler, who died in January of 1913. He was considered one of the most important executives of the FEC Railway, and someone the company would count on to lead the organization following the death of Flagler. However, his stewardship as president lasted less than a year after the death of his boss.

In a Miami Metropolis article dated November 5, 1913, Charles E. Jones described the relationship between Flagler and Parrott as follows: “Flagler had the millions, and Parrott the brains.” It was Parrott who oversaw the company owned newspapers such as the Florida Times-Union and other Florida periodicals, and was intimately involved in the construction of the Oversea Railway to Key West.

Given his role with the FEC Railway, Parrott traveled extensively throughout Florida. At times, he could be found in Jacksonville, other times in Saint Augustine and on occasion in Miami. When he was in the Magic City, his home was the cottage located at 229 Fourteenth street. This thoroughfare was part of a beautiful, tree-lined, two-block quiescent neighborhood in the heart of what would become a busy commercial sector by the early 1920s. The residence was located on the north side of the road, three lots from the corner of Avenue C (future SE First Avenue), and Fourteenth Street (future SE Second Street).

While Parrott did not spend a lot of time in Miami, he did enjoy a comfortable, nine-room residence. Although it is not clear if Parrott was the first owner of Villa Augusta, a name that would be given to the residence by the next owner, we do know that he owned the property in 1904. It was at this time that Joseph Parrot sold the cottage to a friend who he talked into moving to Miami from Ocala. 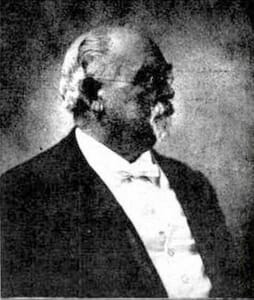 In the spring of 1904, Charles Monroe Brown Sr. was running for governor of the State of Florida. He was a state Senator from Ocala, Florida, and was a long shot to win the election. Ultimately, he ended his gubernatorial campaign prior to election day, a contest which was won by Napoleon Bonaparte Broward, the person who Broward County was named when it was formed from portions of Dade and Palm Beach counties in 1915.

Following the disappointment of the election, Brown decided to sell his furniture business in Ocala and move to Miami. He and his son, Charles M. Jr., purchased the furniture stock and building from pioneer furniture merchant, Edwin Nelson, on October 8, 1904. The building was located at 409 and 411 Twelfth street (where the Biscayne Bay building is located on Flagler Street today). The father and son renamed the store to ‘Dade County Furniture Company’ and ran the business until they sold it to Eli McDonald in June of 1917.

In addition to acquiring a business, Charles Sr. also purchased 229 Fourteenth Street from Joseph Parrott in November of 1904. Over the next ten years, Brown made major landscaping improvements to the property. At some point during his ownership, Charles gave the home the name of ‘Villa Augusta’. His wife’s name was Augusta Faison Brown, so it stands to reason that he named the residence for his wife.

The property was featured in the Miami Herald on April 14, 1914 in an article entitled “Bougainvillea is in Full Bloom”, highlighting the property’s entrance which was enveloped in a sea of purple stemming from the growth of bougainvillea flowers anchored along “the stone wall and the beautiful white archways.”

The writer of the article described the beauty of the front entrance as follows:

“As one approaches the corner, near which the residence is located, he is at once attracted by the great masses of exquisite purple bloom and, upon examining it more closely, he discovers that it is an arbor of bougainvillea, so closely massed together that it gives the appearance of one mammoth purple blossom.”

The writer went on to describe the unique natural arrangement of the floral display:

“The bushes seem to have adapted themselves readily to the architectural treatment of the home and the gateway in the foreground. Over the archways in front of the house the flowers seem to have crept along like vines and are just full enough in their growth to cover the top of the arches and to overhang in a most artistic manner.” 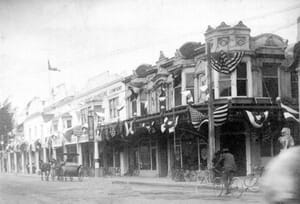 The entire property was beautifully landscaped with flowers and green foliage. The flowers that attached to the bushes provided a picturesque privacy hedge from the front to the backyard. Because the flowers bloomed year-round, the Brown residence was not only a source of pride for the family, but was considered “a scene which may be pointed to with pride by all Miamians as one of the beauty spots of the city.”

Charles Brown sold the property to a physician from Philadelphia in February of 1916 for $13,500. In the Miami Herald article that reported the sale, Charles was quoted as saying that he had no intention of leaving the city because he had investments in the area and has “every confidence in the future of Miami.”

Charles kept his promise and lived his remaining years in the Magic City. He moved to a home located at 4 SE Seventh Street in Brickell and lived there until he passed away on November 27, 1927 at the age of 84. His last home was located where part of Brickell City Center is located today. 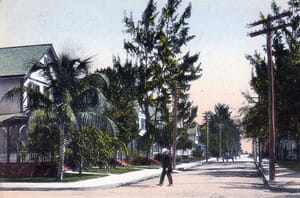 The new owner, Dr. C.V. Harris, purchased the home to be his winter retreat. At the time of the purchase, he said that he and his wife were considering moving to Miami full-time, but had not made any decisions. Based on directory listings and advertisements in local newspapers, it appears that the doctor only resided in the cottage during the winter months, then leased the property during the summer after he and his family returned to Philadelphia.

The Harris family purchased not only the residence, but the furnishings as well which included a fireplace, piano, linens, silver, drapes and a fully furnished social room. The residence was fully equipped to accommodate both its winter resident and summer tenants. During this time, the homeowner and renters maintained the arbor of Bougainvillea at the entranceway to retain the beauty of one of Miami’s earliest residential quarters. However, the value of the lots located along Thirteenth and Fourteenth Streets made it impractical for this section of downtown to remain residential on the eve of the great building boom of the 1920s. 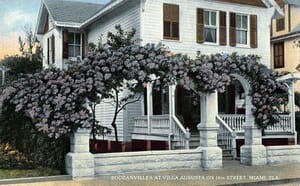 At the onset of the 1920s, the area around the Royal Palm Cottage streets were changing dramatically. Where early Miami was a blend of residential and commercial sectors, land value in the 1920s changed the landscape of downtown Miami. On Thirteenth Street, behind Villa Augusta, several of the Royal Palm Cottages were moved and the land was used to build the Columbia Building. This L-shaped building fronted on Thirteenth Street, curved around Avenue C (SE First Avenue), and finished at Fourteenth Street (SE Second Street), to the west and adjacent to Dr. Harris’ home.

By the end of 1923, based on frequent ads in the local Miami newspapers, Villa Augusta was relegated to a rooming house. The address of the residence was now 119 SE Second Street, changed when the new street naming system was implemented in 1920. Although no longer referred to as ‘Villa Augusta’, the nine-bedroom rooming house was cycling through short-term guests at low rates leaving the owner the alluring prospect of selling the property for a sizable profit. Dr. Harris finally decided to sell the home in 1923 to a dentist by the name of Dr. David Sheehan. Although a dentist by trade, Sheehan understood that the real money to be made in Miami in the 1920s was in real estate.

After acquiring the property located at 119 SE Second Street, Sheehan razed Villa Augusta and began construction of a new eight-story hotel in March of 1924. On December 20th, the Alhambra Hotel celebrated its formal grand opening. Customary of hotel launch parties during this era, the lobby was decorated with flower bouquets to add elegance to the celebration. One could only ruminate on how the arrangement of flowers from that night compared to the sea of bougainvillea blossoms that once covered the front wall and archway of the hotel’s predecessor, Villa Augusta.