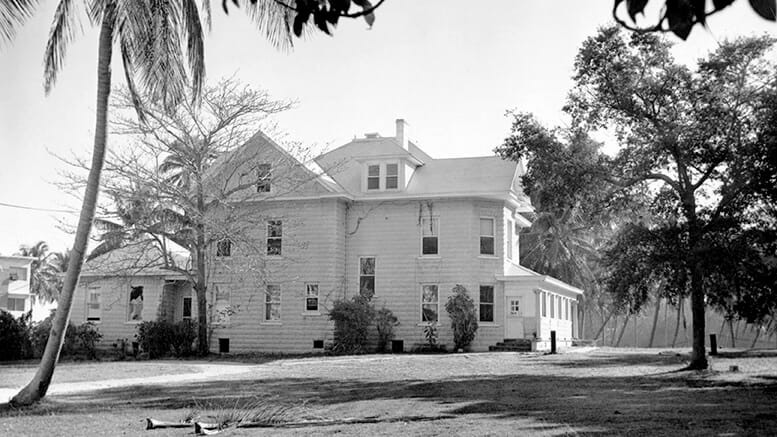 By the mid-1950s, a lot of the fine residences lining Brickell Avenue had begun to disappear in the name of progress. The neighborhood was evolving from single family residences to mid-rise commercial and apartment buildings during the growth period in Miami after World War II. Two casualties of this evolution were mansions constructed by William Brickell III, oldest son of Mary and Bill Brickell, in 1908 and 1910 respectively.

One of the two homes was constructed as rental property, while the other was built to provide William III and his wife, Olive, their first house outside of his parent’s Brickell Point residence. William III and Olive were planning a family by 1908 which likely incentivized the couple to construct a home to call their own. 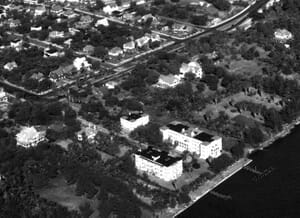 Just prior to William III building his home at today’s 631 Brickell Avenue, he oversaw the construction of the two cottages on Brickell Point. The cottages were constructed using concrete hallow blocks with an artificial white stone façade. Brickell choose to construct both his family home and rental property using the same approach and materials. If one were to look closely at the outside façade of the home in the cover photo, you can see a carefully contoured stone appearance on the exterior of the home.

William III and Olive moved into their new home at 631 Brickell, just south of today’s First Presbyterian Church, in the winter season of 1908 – 09. An article in the Miami Morning News, published on November 29, 1908, declared the family residence was nearly complete and that the family would move in soon. The couple welcomed a daughter, Mary, named for William’s mother, in 1909, and then a son, William IV, in 1911. 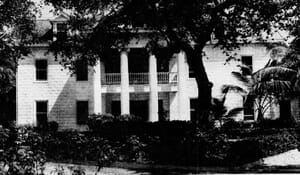 The family resided at 631 Brickell Avenue until the Bulmer Apartment building was completed in 1921. William III established his structure directly across the street from the Brickell Apartments, opened a couple of years earlier by his brother Charles. William III named his apartment complex in honor of his mother, whose maiden name was Bulmer.

In 1912, William III built a second mansion at 701 Brickell Avenue as rental property, which looked very similar in structure and construction to his family residence. The home was designed to appeal to affluent families visiting Miami during the winter season and was constructed for $5,000. Years after it was built, William III and Olive’s daughter, Mary, was living in this home when she got engaged to E. Langdon Laws in October of 1935. 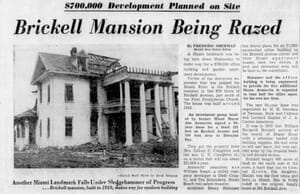 Figure 3: Article in Miami Herald on February 27, 1958, announcing the demolition of 631 Brickell Avenue.

The two residences constructed by William III were purchased by the Claughton family in the 1950s. The Claughtons had a large investment in Miami including ownership of the Urmey Hotel, Claughton Island, which is now Brickell Key on Claughton Island, and the Brickell Apartment property, among many other real estate holdings in South Florida. By the middle decades of the 20th century, both mansions were leased as apartment units to individual renters rather than a single tenant.

The 701 Brickell building was the first to be razed in the summer of 1956. The 631 Brickell residence stood until it was sold to an investment group headed by a former mayor of Miami, Abe Aronovitz, who signed a 94-year lease for $21,000 per year for the land. The lease accounted for a lot that was 131 feet wide on Brickell Avenue and 700 feet deep to Biscayne Bay. Lillian and Edward Jr. were the lessors named in the agreement. 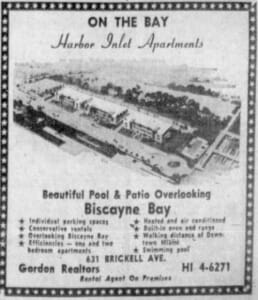 The Miami Herald article announcing the agreement and new development on February 27, 1958, referred to William III’s former residences as a “victim of the downtown expansion that has jumped the Miami River.”

The Aronovitz team hired Architect Henry Hohauser to design the office and apartment buildings. The plans called for an 11,000 square foot office building and three 20-unit apartment houses constructed as two-story structures. The Harbor Inlet Apartments, as they were called, included a pool and recreation area to be built along the bay at the back of the lot. As part of the new development, SE Seventh Street was extended from Brickell Avenue to the bay. The commercial building stood on the northeast corner of Brickell Avenue and SE 7th Street, and the three Harbor Inlet Apartment buildings lined SE 7th Street to the east of the commercial edifice. 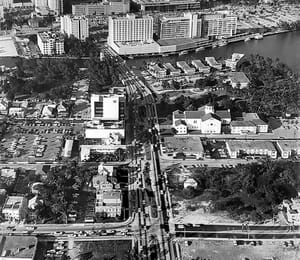 Figure 5: Aerial of Brickell Avenue in 1968. The commercial building and Harbor Inlet Apartments are just below the First Presbyterian Church.

Despite all the fanfare of Aronovitz’s development, it lasted less than thirty years. The commercial structure and apartment buildings were razed in the mid-1980s and replaced with the Lincoln Financial Center at 701 Brickell Avenue. During the development of the tower in 1986, the extension of SE 7th Street from Brickell Avenue to the bay was replaced with an underground parking garage.

The Lincoln Financial Center, which is referred to as the Bank of America building today, sits on a rich history of Brickell family development of a foregone era. While the community carries the family name, much of what the Brickells constructed in their neighborhood has been lost. Progress necessitates new and modern development, and the replacement of older buildings is part of the change associated with progress, but it is interesting to ponder what the Brickell family members of a hundred years ago would think of how their tranquil residential neighborhood has transformed into what it is today.