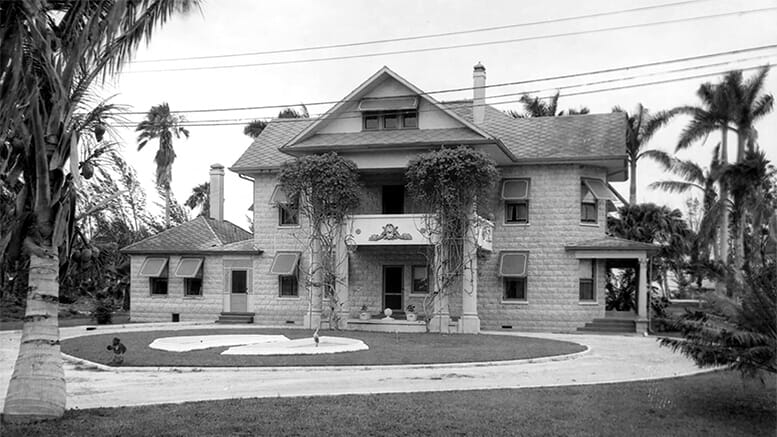 It was not long ago that Brickell Avenue was lined with beautiful single-family homes, each designed with a contemporary architectural style. During this era, the avenue was primarily a tranquil, tree-lined residential corridor that was bracketed by winter domiciles built for wealthy northern visitors, or prominent locals, many who spent most of their time in South Florida but retreated to more temperate climates during the summer months.

Such was the case with 1017 Brickell Avenue. Originally constructed as rental property for winter visitors, the residence became the home of a pioneer grocer for more than thirty years. Like so many other homes along Brickell Avenue, the 1017 residence was ornate, stately, and set back on a beautiful, wooded lot in one of Miami’s most prestigious neighborhoods. 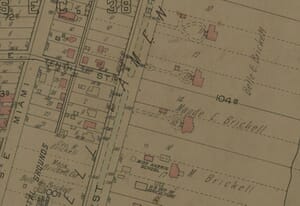 While the Brickell family was busy platting and selling land within their vast real estate holdings, they also built residences as rental property as well. In 1917, Mary Brickell transferred lots located along Brickell Avenue, described in the plat maps as Block 104 South, to several of her children which included lots 10 through 15 on that block. The breakdown of the lots transferred in this transaction were as follows: Edith (lots 10 & 11), Belle (lots 12 & 13), and Maude (lots 14 & 15). A year later, in 1918, one of the lots assigned to Edith (lot 11), and another assigned to Belle (lot 13), were developed when the family constructed two bungalows along the eastern side of the 900 block of Brickell Avenue. Permits were issued in June of 1918 for an estimated $8000 construction cost for each residence.

The two residences, with the addresses of 909 (lot 11) and 931 (lot 13) Brickell Avenue, stood at the terminus of an extended circular driveway and were positioned toward the center of the long and narrow lots, at a time when Brickell lots stretched from the avenue to the bay. Brickell Bay Drive, which was originally named South Bayshore Drive, would not bifurcate these lots, which were located between SE Eighth Street and SE Twelfth Street, until the mid-1960s.

Each of the two bungalows included a separate structure providing covered parking for up to two automobiles. The 931 bungalow’s structure was a single-story structure serving exclusively as a garage. The structure for the 909 bungalow provided a second story consisting of an apartment above the garage. The bungalows and garage apartment were rental property for the Brickell family through the years beginning in the winter season of 1918. 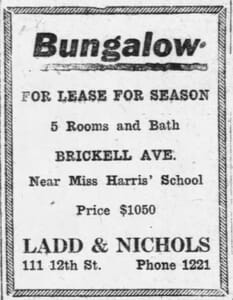 By 1922, the demand for rental property throughout Miami convinced the Brickells to construct two more bungalows, directly to the south of the first two. One of the residences, at 1051 Brickell Avenue (lot 17), became the location of Miss Harris Florida School for Girls. Prior to leasing the 1051 bungalow, the school operated out of a converted residence on the southwest corner of SE Eighth Street and Brickell Avenue from 1915 until they outgrew the location by the early 1920s. They opened at 1051 Brickell Avenue in October of 1922, where Miss Julia Harris operated the school until she moved it to Stuart, Florida, in 1958.

The 1017 Brickell Avenue residence (lot 15) was the other bungalow built during this time and was configured as a five-bedroom and five-bathroom furnished mansion. Advertisements touted the properties spacious, wooded yard which featured native trees and shrubbery. The newspaper ads also touted its proximity to the well-known Miss Harris school.

All four bungalows looked similar to the Brickell Point cottages and the first residence of William Brickell III. While the layout, size, and configuration of each building were different, all of these structures featured an artificial stone façade provided by the Art Stone Construction Company, and were constructed as two or three-story residences. Like the 909 bungalow, which included a second level for a residential apartment, the 1017 bungalow garage also provided a second level apartment which was rented separately from the primary residence.

The 1017 bungalow was rental property until the mid-1930s when a pioneer grocer purchased the residence. The Tanner family owned the property from 1935 until 1968, when the home was razed and replaced with the commercial building at 999 Brickell Avenue.

Purchased by Orry Judson Tanner in 1935 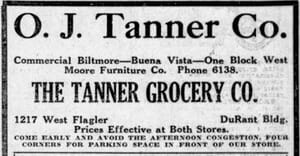 The Tanner family first migrated from Seymour, Indiana, to Dade City, Florida in 1883, when Orry J. Tanner was only three years old. Following the loss of his wife shortly after arriving in Florida, Orry’s father moved the family back to Indiana, but later returned when he became interested in a citrus grove in Pasco County. It was there that young Orry attended public school.

He later attended State Normal School in DeFuniak Springs, Florida, where he studied to become a teacher. Upon his graduation he moved to Dade City, Florida, to teach for three years until he decided to change careers by taking a position as a bookkeeper for a meat packing firm in Tampa, Florida. 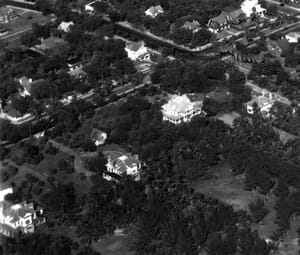 While Tampa was a thriving city at the time, Orry decided to relocate to Little River in 1901 when he went to work for the James Brothers, a fruit brokerage firm, as a bookkeeper. As South Florida developed in the early part of the twentieth century, Tanner ventured out on his own and opened his first grocery store in 1912 in Little River, the same year he married Lottie Ella Mischler. A few years later, in 1916, he moved his grocery store to Buena Vista, one block west of the Moore Furniture Company.

Tanner expanded into the rapidly growing city of Miami in 1923 when he opened his second store at 1263 West Flagler Street. A year later, in 1924, he opened his third location in the Tanner Building at 1753 N.E. Second Avenue. The next Tanner Grocery store was opened in Coral Gables at 1906 Ponce de Leon Boulevard in 1934. By the mid-1930s, the OJ Tanner Company was operating four of the most profitable and popular grocery stores in the Miami area.

It was around this time that Orry Tanner decided to purchase the bungalow at 1017 Brickell Avenue. The residence had been leased as rental property from the time it was constructed in 1922 until the Tanners moved into the home in 1935. While the family purchased the home as their primary residence, they spent every summer at their mountain home in Hendersonville, North Carolina. The Tanners occupied the bungalow, but leased the garage apartment. One of the notable tenants was the man who is credited with being Miami Beach’s first barber.

William T. Spatch was credited with being the first to open a barbershop on Miami Beach when he launched his parlor in the Hardy Casino building in 1919. He arrived two years earlier from Toledo, Ohio, when he began his career in the barbering business, a career that would last for twenty-two years before he retired from the business in the mid-1930s.

He raised a daughter and two sons in Miami and became an integral member of the community during a formative time for the Magic City. Upon retiring in 1934, he and his wife decided to scale down and move into the spacious apartment above the garage at 1017 Brickell Avenue. The couple lived there until William’s passing on August 27, 1939. 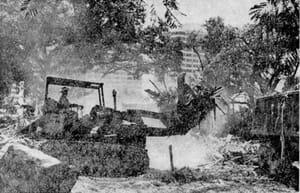 In addition to becoming a fixture in the Miami area for operating a successful grocery store chain, the Tanner family also became long-time residents of the Brickell neighborhood. Orry and his wife, Lottie, enjoyed the special moments of raising their children in their Brickell Avenue residence, and even hosted their daughter’s wedding reception in the home. That same daughter, Gladys Christine Tanner, attended Miss Harris School for her early education.

Sadly, the family lost the patriarch, Orry, when he suddenly passed away in the home on December 1, 1943. The family, surrounding community, and Miami business community were shocked to hear the news. Based on probate records, Orry’s estate was worth a total of $189,050 of which his residence at 1017 Brickell Avenue was valued at $24,500. His company stock holdings in the Tanner Grocery Company were valued at $49,225. The business taken over by Orry’s business partners and operated under the original brand name until 1958. Orry Tanner junior worked for the grocer until he retired in 1960.

Despite the loss of her husband, Lottie Tanner continued to live in the Brickell bungalow until her passing on April 4, 1968. The residence represented a place for the Tanner family to enjoy special occasions until the matriarch’s death. As part of Lottie’s probate proceedings, the family home was sold and eventually redeveloped as an office building in the early 1970s. 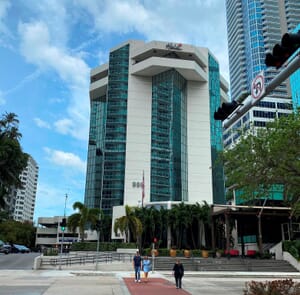 Demolition of the 1017 Brickell Avenue bungalow took place in November of 1969. The neighborhood was beginning to shift from primarily residential to commercial around this time, and the new owners of the property reached an agreement with Citizen’s Federal Savings & Loan to lease the Morris Lapidus designed eleven-story building at 999 Brickell Avenue. Citizen’s Federal leased the first five floors and the penthouse and moved into the building in 1974.

Today, Helm Bank is the signature tenant at 999 Brickell Avenue in the uniquely designed Morris Lapidus building. So far, the commercial building has lasted 49 years on this parcel of Brickell Avenue, two years longer than the bungalow that preceded it. The property that was once Miss Harris School is now the location of Panorama Tower, and the lots of the other two bungalows on the 900 block of Brickell Avenue are now part of The Plaza on Brickell complex.