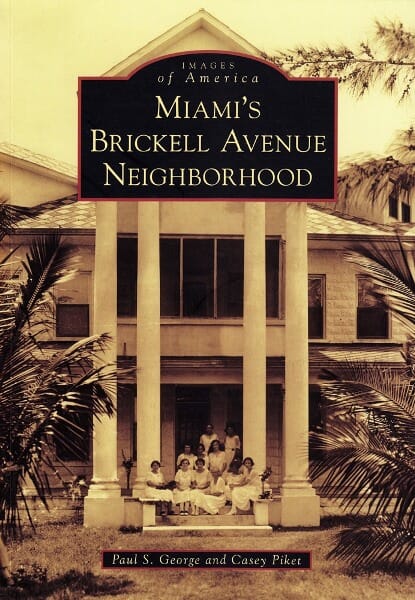 Click on the picture to order your signed copy!

One of Florida’s most exciting quarters, Miami’s Brickell Avenue neighborhood has evolved in 150 years from a subtropical wilderness studded with tall oak trees and an impassable underbrush to its present status as southeast Florida’s most exciting neighborhood.  A long time ago, in 1871, the large Brickell family, headed by patriarchs William and Mary, entered this desolate Eden, bracketed on two sides by the Miami River and Biscayne Bay, and instituted its slow transformation, first opening what became a busy trading post while methodically acquiring thousands of acres of land through purchase and federal homestead laws.

Born in Ohio, William Brickell was stricken by wanderlust and an entrepreneurial spirit at a young age, visiting California during its mid-century gold rush, and, later, Australia during its own gold strike in the 1860s.  There William met young Mary Bulmer, who, along with her family, had migrated from England to Australia.  The couple married in the late 1860s, and moved to the United States.  Soon after, they set out for another frontier, the wilds of southeast Florida.

The family’s vast real estate holdings remained undeveloped until Henry M. Flagler’s Florida East Coast Railway steamed into Miami in April 1896.  Thereafter, the Brickells began to sell, lease, develop and rent portions of their properties along today’s Brickell Avenue and points east. What began to emerge was a quiescent neighborhood of wood frame homes with open porches and pitched roofs hard by the bay and the river. By the 1920s, more grand homes began to appear.  The southern portions of Brickell Avenue became a “Millionaire’s Row” after Mary Brickell put up for sale large lots backing to the warm waters of Biscayne Bay. Grand homes in the Beaux Arts and Mediterranean styles became winter homes for prominent families from the northeastern United States.

The Great Depression caused some homeowners to subdivide their homes, which then took on the appearance and function of rooming houses. The expansive period following World War II brought additional changes as small numbers of retail and institutional buildings appeared on Brickell Avenue. By the late 1970s, the old Millionaire’s Row was giving way to tall condominiums with avant garde designs. The era of Brickell skyscrapers was underway. In the meantime, Brickell was on the road to becoming a banking center hosting banks whose headquarters were found in many corners of the world.

By the beginning of the new century, nearly all of the neighborhood’s original housing stock was gone and the first of two booms that would transform Brickell into the Manhattan of South Florida was underway.  With its forest of high rises, including two of the tallest buildings in the southeastern United States, the Brickell Avenue neighborhood has become a 24/7 place with a profusion of condominiums, hotels, restaurants, and financial services centers, and a pedestrian life second to none in the region.

To order your book, please send an e-mail to casey@sfwebnet.com and I will reach out with options to pay.