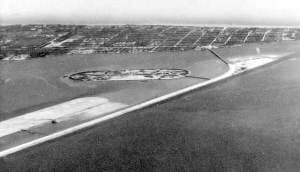 The County Causeway construction began in 1917 over concern of the aging wooden Collins Bridge being the only thoroughfare from the mainland to Miami Beach. The project was halted due to World War I. At the conclusion of the war, construction continued until its completion in 1920.

In 1942, the State Road Board and Dade County Commission voted to rename the road to the MacArthur Causeway in honor of General Douglas MacArthur. The causeway was originally configured as a two lane road, but has gone through several lane and structural expansions since it opened in 1920.