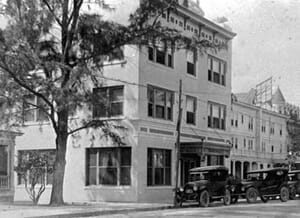 On the front page of the Miami Metropolis on May 6, 1919, it was announced that C.J. Martin had acquired a lot on Eleventh Street for $16,000 with the intention of building a three-story hotel and apartment house on the property. Eleventh street was later renamed to SE First Street and the lot was located between SE Third and SE Second Avenue in downtown Miami. Once it was completed in 1920, the place was named Hotel Martinique and its address was 226 N.E. First Street.

The article described the property as being adjacent to the Carlos Hotel on Avenue B (later named N.E. Second Avenue). Martin was the proprietor of the Martin-Cureton Lumber Company and he planned to spend $70,000 to complete his hotel that would be constructed with concrete and would include a basement. The lobby on the first floor was tiled and the staircase made of marble. 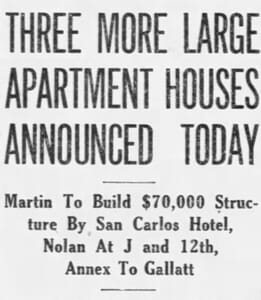 The design of the hotel was described in the article as follows:

The hotel and apartment house provide much needed housing during the 1920s building boom. However, after the building boom ended, the business fell on financial hard times and was sold to a new ownership group in 1930. The group changed the name to Hotel Pershing shortly after taking possession.

Hotel Pershing struggled through the 1930s and ultimately was forced into bankruptcy in 1942. After foreclosure and change of ownership, the hotel continued to stay afloat for several more decades. However, along with the change of fortunes in downtown Miami in the 1960s and 70s, the hotel’s clientele changed dramatically while it operated as a flop house during this time. The owner was only able to charge seven dollars a night for each room and he claimed he was only able to pay property taxes with the income his getting from rent. 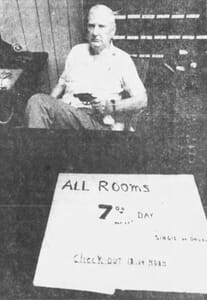 By 1978, the City of Miami  condemned many of the downtown rooming houses. The Pershing Hotel was called out for many fire inspection violations. However, the hotel was still in business into the 1980s. By the early 1990s, the hotel was replaced with a one-story commercial building still standing today.