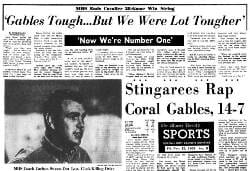 However, it wasn’t just the magnitude of the stakes that made this game so memorable. The attendance in the raucous Orange Bowl that evening was a state record to watch a high school football game. The estimates were anywhere between 47,000 – 50,000 people in attendance. It has been said that Joe Robbie pointed to the attendance at this game to help justify bringing an AFL team to play at the Orange Bowl in Miami. The Dolphins were awarded to Miami and played their inaugural season in 1966.

Read the story at Miami Herald