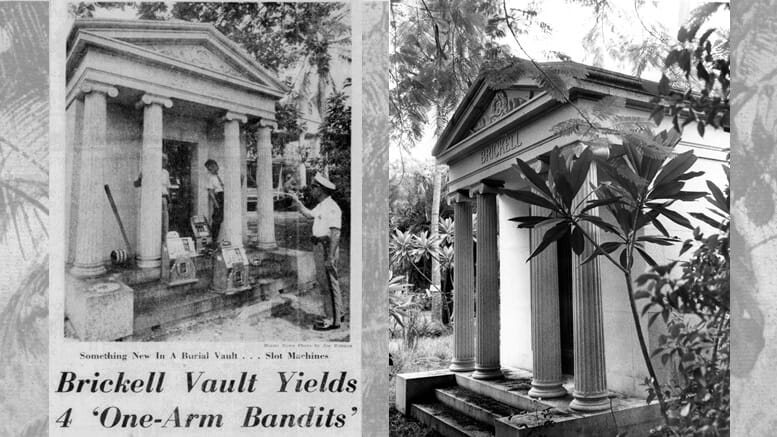 Less than a year after the passing of Maude Brickell, the last family member who lived on Brickell Point, there was an unusual discovery in the family mausoleum. According to a Miami News article dated July 18, 1961 detectives announced that they found four (the Miami Herald reported five), “one-arm bandits”, slang for slot machines, hid in the Brickell family mausoleum. A worker trimming foliage in Brickell Park, the location of the burial vault, discovered the gambling devices when he looked through the recently installed grilled gate protecting the entrance to the mausoleum and noticed the machines. 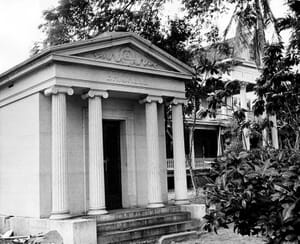 Maude sold the land where the family mansion, located at 501 Brickell Avenue and now the location of Icon Brickell, to the Elks Club in 1948. Her one condition was that the Brickell family home would be left standing and that she could live there until her passing, which occurred on November 22, 1960. The burial chamber is on land donated by the family to the city in 1924 for Brickell Park. The mansion was razed in the fall of 1961, but the mausoleum remains in the park at the same location it was erected in the early 1920s.

The Park District called police who dispatched detectives M.C. Tucker and D.D. Massingill to the scene where they removed the gambling devices. The detectives said the slot machines where partially hidden on each of the slabs found within the Georgia Marble mausoleum. The Brickell family members who were once buried in the family vault had been moved and interred into a different mausoleum located at the Woodlawn Cemetery in 1948. Although the land was owned by the Elks at the time, a spokesman for the lodge denied knowing anything about the slot machines.

One of the machines was what the writer of the Miami News described as “an old Mills contraption, mechanically operated, the one-armed bandit of a quarter-century ago.” Detective Tucker put in a dime and pulled the crank and got two oranges. Had it he hit paydirt, he would have been disappointed. There were no coins found in any of the machines.