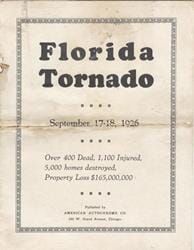 Beginning on September 17th and continuing on September 18th, 1926, South Florida suffered one of the most devastating storms in the region’s history. The storm was so impactful that locals still commemorate its anniversary 89 years later. As the cover of the booklet states, there were 400 killed, 1100 injured and over $165 million in property damage. That would represent over $2.2 billion in today’s dollars.

The 1926 Hurricane provided the final punctuation between the end of the building boom of the mid-1920s, and an early start to the Great Depression for South Florida residents. While there were plenty of devastating storms that followed, the 1926 Hurricane will always be on a short list of memorable events in South Florida history.

The booklet, published on the Miami History Pinterest Page, refers to the storm as the “Florida Tornado”. At the time, hurricanes may have been referred to as tornadoes. The booklet was published in the late 1920s and provides great insight into the devastation of this powerful storm. The publication provides a unique set of pictures of the devastation caused by the 1926 Hurricane. A special thank you to Ronnie Hurwitz for providing the booklet to be scanned and shared!!

See the full Booklet on the Miami History Pinterest Page