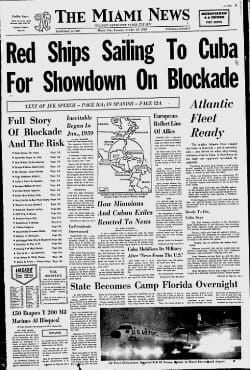 October 14th, 1962 began a 13 day conflict that was known as the Cuban Missile Crisis. It was a stand-off between the United States and the Soviet Union over nuclear-armed Soviet missiles being installed in Cuba.

In a TV address by John F. Kennedy on October 22nd, 1962, President John F. Kennedy notified Americans about the presence of missiles and decision to enact a naval blockade around Cuba and was very clear that the United States was prepared to take military action to keep nuclear weapons out of Cuba.

The conflict was resolved on October 27th when the Soviets offered to remove nuclear missiles in exchange for the U.S. promising not to invade Cuba and for removing missiles from Turkey. For the better part of this conflict, it seemed that the world was headed for a nuclear disaster of epic proportions.

See the speech by President Kennedy below: