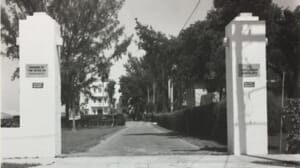 The cover photo is a picture of the entrance to the Castlereagh Apartments at 1005 Brickell Avenue. The picture was taken on July 19, 1951 by Dr. Fuad Hanna, who lived across the street. Hanna also ran his own apartment building called the Hanna Apartments.

The apartment building was built in the fall of 1936. It was opened in the early spring of 1937 and advertised itself as an apartment “mansion”. 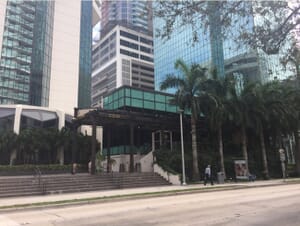 The building was set back from Brickell Avenue and the property for the complex stretched all the way to Biscayne Bay. Brickell Bay Drive did not extend north of SE Twelfth Street until the mid-1960s.

Helm Bank and Nusr Et restaurant now sit on the land of the former location of this building.  Prior to Nusr Et, the building with the green awning was home to Coya Restaurant.