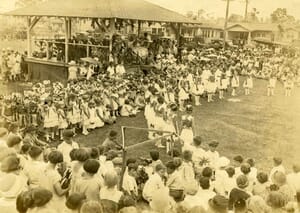 Moore Park during the first Palm Festival in 1933

Sports have been a big part of Miami’s entertainment fabric from the very beginning. In the first couple of decades baseball games were played at Royal Palm Park which was adjacent to the Royal Palm Hotel. Given the access to the ocean, fishing tournaments were a big draw, particularly for conventioneers who traveled to Miami during the winter months.

The Art Deco Age began in the late 1920s and lasted until the start of World War II. During this era, football became more popular and games played at Moore Park and Roddy Burdine Stadium, later renamed to the Orange Bowl, were very well attended and anticipated with great excitement. Dog and horse tracks, golf courses and tennis facilities were built to offer tourists a variety of sporting options during this timeframe.

Tune into this week’s episode to hear more about sports during the Art Deco Age. You can access the podcast on iTunes, Stitcher, Soundcloud and on the Miami-History website.