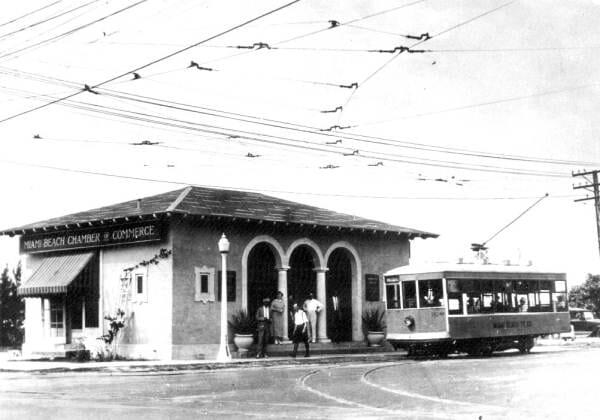 There has been a lot of discussion by city commissioners around re-instituting trolley service to provide mass transit to under served areas in Miami-Dade County. While this idea could alleviate a growing problem of urban congestion, it certainly is not a new concept in Miami. 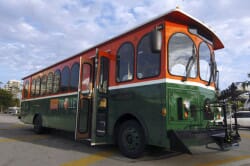 With the opening to the new Marlin’s Ballpark in Little Havana, trolley service in Miami is being offered as an option to transport baseball fans from surrounding areas to the ballpark. City Commissioners gave approval for funding a trolley system that will feature replicas of old fashioned street cars complete with wooden seats and leather straps (see the Miami Herald article entitled: Miami commissioners OK new trolley to Marlins’ Little Havana ballpark). Although a Trolley System may seem like a new concept in South Florida, Miami has had a rich history with a variety of trolley concepts, dating all the way back to 1906.

The Trolley in Early Miami

The first form of a trolley in the youthful city appeared in 1906. This was an electronically powered streetcar system. Given the population of the city, the ridership did not support the venture and the very first Trolley Era ended just a year and a half later.

Miami would not experience trolley service again until 1915, when a battery-operated trolley on rails went from the location of what is now the Marlin’s Ballpark (formerly the Orange Bowl), north on Avenue B (today’s NE Second Avenue), to Thirty Sixth Street. By 1919, that operation was discontinued. 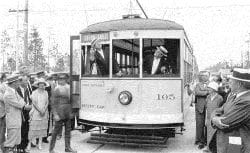 On January 7, 1922, the first streetcar using overhead wires began Miami’s electric trolley system. Shortly after the institution of the downtown streetcar, there was a lot of excitement for the progress of the development of Coral Gables when the electric trolley system was extended to this new and up and coming town developed by George Merrick. In a Miami News article dated August 25, 1924, the headline read “… The New Trolley Comes to Coral Gables”. This news was important because it provided a way to connect the new residents of Coral Gables with the hub of South Florida at that time – downtown Miami. Merrick described the extension of the trolley as one of “far reaching importance, not only in Coral Gables development, but in the advance and progress of all of Western Miami”. It was further said that “seats are handsomely upholstered in Spanish leather”. The location of what is now the Village of Merrick Park once served as the trolley maintenance yard. Tracks are still visible in the alley behind Salzedo Road, north of San Lorenzo.

According to an April 19, 1926 article in the Miami News (“Gables Trolley Will Be Placed on Exhibition”), the new Pullman style Trolley was to achieve speeds of 55 miles per hour and a promise of 15 minute transportation from Coral Gables to Downtown Miami. The article went on to say “a recent test of one of the cars on the Flagler Street Line to Coral Gables proved one of the cars to be the last word in modern electronically-powered surface traction”. The new line of trolley cars had seating capacity of 52 persons.

The trolley expanded to several lines including a line to Miami Beach from just north of what was known as The News Tower and now referred to as Freedom Tower. The completion of the Miami Beach line didn’t occur until after the destruction of the 1926 Hurricane. 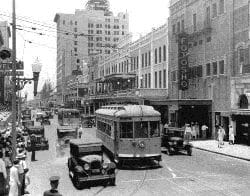 Trolley in downtown Miami in 1927

Although the electric powered Trolley provided much needed mass transportation for the Miamians of the 1920s and 1930s, the service had its share of detractors. The mayor of Miami at the time, EG (EV) Sewell, enticed by propaganda from General Motors, decried that the trolley was outdated, noisy and old fashioned. In truth, the Trolley was none of those things. However, there was a big push around the country to replace mass transportation with internal combustion engines in the form of buses and automobiles. 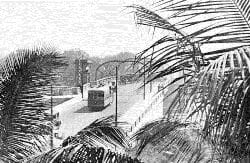 Even the Orange Bowl Committee was excited to hear of the removal of trolleys in the fall of 1940. A Miami News article dated October 11, 1940 (“Prospect of Trolley Removals Elates Orange Bowl Committee”), announced the approval of the bus franchise by the Miami electorate. The Orange Bowl Committee was concerned that the overhead electric wires would present a problem for some of the floats in the New Year’s Day parade. The parade route would pass through several streets that provided trolley service. According to E.E. Seiler, the business manager of the Orange Bowl Committee back in 1940, “the stages on wheels that will carry this winter’s King Orange jamboree are so large and so tall that we were afraid that low hanging trolley lines might interfere in some places. The referendum has removed this threat, because we have been assured the trolley wires will be removed from the streets soon after the trolley cars cease to operate. Those wires are about 18 feet above the street, but that would have been too much for comfort under the plans we are developing for the New Year’s Eve pageantry. In fact, one of the stages on wheels is completed now in one of the city warehouses, and it is so tall that the top portion will have to be removed to get it out of the warehouse.”

The End of the Electric Trolley Era in Miami

However, it was really the November 4, 1935, hurricane that marked the beginning of the end of the last trolley system in Miami. After this storm, the two Coral Gables trolleys, which came to downtown Miami via two separate routes, ceased operating. In 1939, the streetcar service to Miami Beach, via what was then known as the County Causeway (later renamed the MacArthur Causeway), ended. Finally, in November of 1940, the last Trolley Car entered its barn at Southwest Second Street and Second Avenue for the last time. The Trolley Era made an unceremonious end.

If every beginning is some other beginning’s end, then the beginning of bus service in Miami certainly represented the end for the Trolley in the Magic City. It wasn’t until November of 2003 that Trolley Service made a comeback in South Florida. The City of Coral Gables instituted a 7 trolley car fleet to service the city so that pedestrians can get around Coral Gables without the hassles of traffic congestion and parking. Although the Trolley cars emulate the streetcars of the past, they are designed to operate with modern efficiency.

Return of Trolley Service in Miami

It is a bit ironic that it has taken 72 years for Trolley Service to be reinstituted in Miami to serve a sports venue located in what was once the famed Orange Bowl. That number still invokes fond memories to all Miamians who traveled, some even by bus, to that same location in 1972 to enjoy a year when Miami’s beloved Dolphins were perfect.

The City Commissioners vote to fund trolley service back to Miami demonstrates that what is old can indeed be new. Although what is being labeled as a “Trolley” may be nothing more than bus service dressed up as a vintage trolley, it does serve as a reminder to Miami’s past. Perhaps there is even hope for the Dolphins to restore the glory of their glory years?

If you would like to learn more about the history of the Trolley in Miami, check out Chapter 3 in the book “Miami – The Magic City”, by Seth H. Bramson. There are a number of good pictures and stories about the “Time of the Trolley”.

11 Comments on "History of the Trolley in Miami"