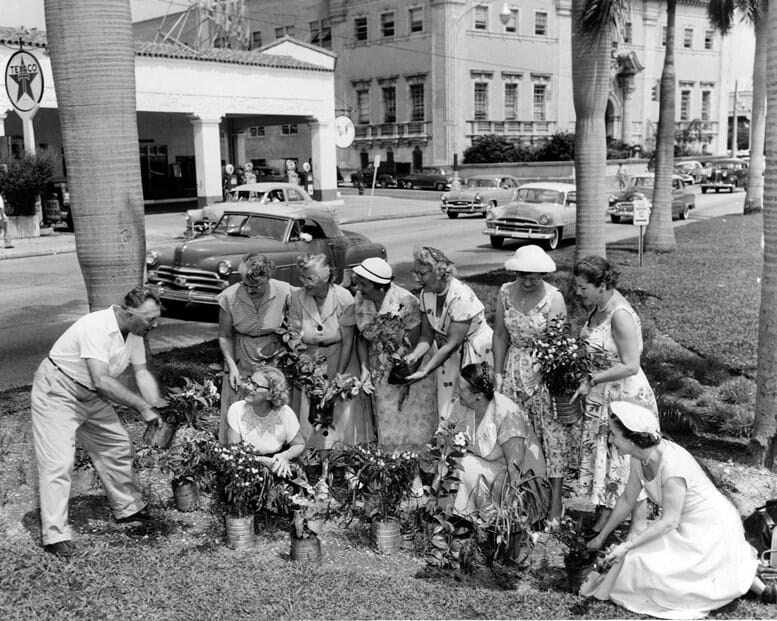 This photo showcases the fine work of the women’s division of the Miami Chamber of Commerce and Garden Club in May of 1954. Cleaning and fixing up Biscayne Boulevard was the theme of the work done by these volunteers as they planted flowers in the median strip of the boulevard on this day.

While the median strip of Biscayne Boulevard is narrower and paved today, it was beautifully landscaped with grass, flowers, and palm trees in 1954. Mid-century civic organizations took pride in the appearance of the city and would often organize beautification projects such as the one captured in this picture. 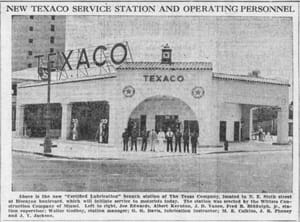 The Spanish styled Texaco gas station that can be seen in the background on the corner of Biscayne Boulevard and N.E. Sixth Street opened on April 1, 1933, when it announced itself as the new “Certified Lubrication” branch of the Texas Company. The facility was built by the Witters Construction Company of Miami.

It operated on that corner until 1992, when both the gas station and Parkleigh Apartments, which stood adjacent and to the south of the Texaco building, were razed to provide a parking lot for Miami-Dade College. Texaco was one of several service stations that operated along an area referred to as “Gasoline Alley”, a moniker given to the downtown stretch of Biscayne Boulevard during the middle decades of the twentieth century. 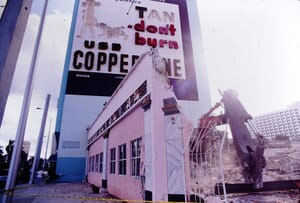 North of the Texaco station was the Miami News Tower. It was completed in 1925 and was home to the Miami Daily News from its opening until 1957 when it moved to a new location on the south bank of the Miami River near Northwest Tenth Avenue.

The tower was sold to the federal government in 1962 and reopened as the Cuban Refugee Emergency Center. Shortly after launching in this role, it was given the nickname “Freedom Tower”. The federal government closed the center in 1974 after which it was bought and sold several times before it was acquired by Miami-Dade College, which owns and operates the facility as a museum and event center today.