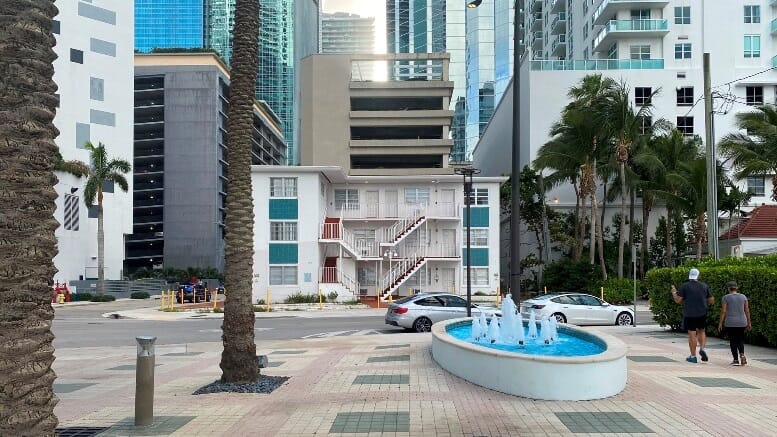 In today’s real estate market, it is not surprising news when a parcel of property in the Brickell neighborhood is sold for a large sum of money. However, there are times when a high-profile buyer makes one wonder as to what that transaction could mean for the building and the neighborhood. While the 1950’s era small garden apartment building along Brickell Bay Drive may not qualify as historic, aside from the age of the structure, it does represent the last of its kind in a neighborhood that was once dotted with these type of apartment buildings.

The Citadel corporation has been very busy acquiring parcels of land in preparation for their move from Chicago to Miami. According to The Next Miami website, Citadel, via one of its affiliate companies, has invested over $650 million for real estate in the Brickell neighborhood, of which the most recent transaction involved the small apartment building at 1250 Brickell Bay Drive. Here is the history of the area and building acquired for $20 million.

The period that followed the end of World War II represented a time of unfettered growth in Miami, which led to the construction of a lot of multi-family apartment buildings around South Florida. The Brickell neighborhood saw a flurry of new construction for these garden apartment buildings during the period of the late 1940s through the 1950s. One of the projects that was announced in December of 1958 was a small apartment building that would be constructed on South Bayshore Drive in the heart of Miami’s Southside neighborhood. The street name would change from South Bayshore Drive to Brickell Bay Drive in the late-1990s.

On December 7, 1959, the Miami Herald described the project as a “9-unit apartment house”, that would be built on a vacant lot at 1250 South Bayshore Drive. The architect for the building was Gerard Pitt and the general contractor was Jack Whitman, with the project estimated to cost $30,000. The property investor who financed the project was Morris Gevertz, who had been developing and managing small apartment buildings in Miami and Miami Beach since his arrival from New York in 1950.

The apartment building was completed by the fall of 1959 and management began placing advertisements in the local newspapers by October that year. An advertisement, placed in the Miami Herald on October 11, 1959, described the building as offering one-bedroom and efficiency apartments beginning at rental rate of $95 per month. The ad indicated that units would be open for inspection beginning on October 15th. Despite the original description as a “9-unit apartment house”, once finished, the building was described as having 12 apartment units. 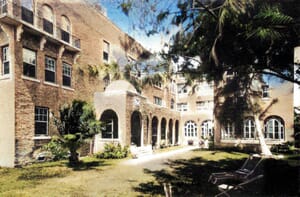 The Brickell neighborhood along South Bayshore Drive was a quiet residential quarter by the time the 1250 apartments were completed in 1959. Along SE Twelfth Street and the Bay was the Ocean Ranch Motel, constructed in the early 1950s, which featured a large pool with cabanas, motel rooms and a lounge. To the south of the Ocean Ranch, and across the street from where the 1250 apartment building was constructed, was the South Bayshore Drive Apartments, which opened in 1922 by Fred Brown as the Fredora Court Apartments. The original name of the building was a combination of Fred and his wife’s first names. Fred and Dora ran the apartment house until it was foreclosed on in 1929.

The area from SE Twelfth Street to SE Fourteenth Street included a mix of two and three-story garden apartments intermixed within single-family residences dating back to the 1920s. Other apartment buildings still standing in 1959 included the Long Acre Villa apartments at 1300 South Bayshore Drive (now Brickell House Condominiums), and the South Bay Shore Apartments at 1204 South Bayshore Drive (now the Club at Brickell Bay condominiums). These buildings stood until the 1970s when they were razed leaving the lots vacant until the Brickell House and Club at Brickell Bay were constructed in recent years. 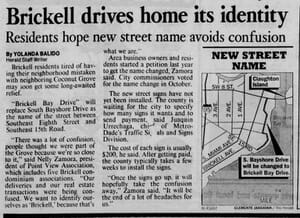 The Point View Association, which its members were directly impacted by the confusion, began a petition drive to change the name of the Brickell stretch of South Bayshore Drive to address the problem. A quote by Nelly Zamora, president of the association, summed up the frustration as follows:

“There was a lot of confusion, people thought we were part of the Grove because we’re so close to it. Our deliveries and our real estate transactions were being confused. We want to identify ourselves as ‘Brickell’, because that’s what we are.”

By February of 1998, the Miami City Commission agreed with the petitioners and renamed South Bayshore Drive, from SE Eighth Street to SE Fifteenth Road, to Brickell Bay Drive. Given the cachet of the Brickell neighborhood today, the move to align the street name with Brickell was an important change on the eve of a neighborhood becoming an internationally known real estate brand. 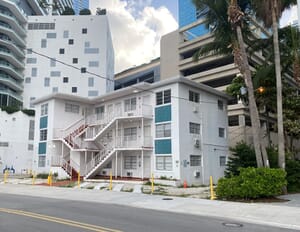 According to the Miami-Dade appraiser website, the 1250 apartments changed ownership three times, from 1997 until Citadel purchased the property in August of 2022. On June 23, 1997, Gabriel Bender, a Colombian national, sold the property for $590,000 to 2RM Investments, a corporation headed by Yamile Montero.

Seven years later, on September 10, 2004, 2RM Investments turned around and sold their investment for $1.6 million to Cecilia Zurita and Washington Vasconez. Seventeen years later, Zurita and Vasconez setup an investment LLC called CW Holdings on April 1, 2021, then shifted their ownership interest into the corporate entity.

If there is one thing the transactions associated with this property confirms, real estate in Miami appreciates quickly. However, this was just one of several acquisitions made by Citadel in the Brickell neighborhood this year. 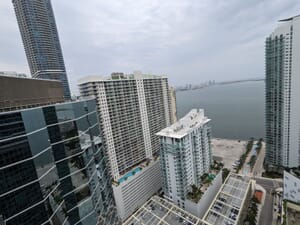 Figure 5: Aerial of 1221 Brickell and Vacant Lot Owned by Citadel

Prior to their acquisition of 1250 and 1260 Brickell Bay Drive, Citadel had already been on a real estate buying spree. The company purchased the 2.5-acre vacant lot, currently being used as a parking lot, at 1201 Brickell Bay drive for $363 million in April. Furthermore, The Next Miami is speculating that they may be behind the purchase of the 28-story office building at 1221 Brickell Avenue which recently sold to an undisclosed buyer for $286.5 million.

In addition to the purchase of real estate, Citadel recently signed a long-term contract to lease 95,000 square feet of office space at the tower under construction at 830 Brickell, across from the Brickell City Centre mall. It is safe to say that Ken Griffin and his company, Citadel, have established a foothold in the Brickell neighborhood.

Without the benefit of a crystal ball, it is too early to speculate on what Citadel plans to do with the apartment building and the underlying and adjacent land. The Commercial Observer article speculated that, if they did indeed purchase 1221 Brickell Avenue, they may want to construct a skybridge between what will become their corporate headquarters building at 1201 Brickell Bay Drive to the 1221 Brickell Avenue building. At this point, it is not clear how their latest acquisition fits into the big picture for Citadel.

As long as big money continues to flow into Miami the Brickell neighborhood and its skyline will continue to evolve. Long-time Brickell residents can only marvel at how much the area continues to change, and we likely haven’t seen anything yet.